The well of history

The well of history

The heat is oppressive. Down the stone stairs. Shade. The wet sari clinging to her skin, Zeenat Begum is washing herself in cool water. The pool is covered with the yellow leaves of kikar. “It’s my hamam," says the elderly woman. Picking up her blouse from the steps, she says, “I’m a beggar and I bathe like a queen."

Zeenat Begum’s hamam is Gandhak ki Baoli, Delhi’s oldest surviving stepwell. Because of its sulphur-rich water, said to have healing properties for skin ailments, this baoli was used as a spa. Believed to have been built by Sultan Iltutmish in the 13th century, it is a beautiful otherworldly abyss close to the Qutub Minar in south Delhi. 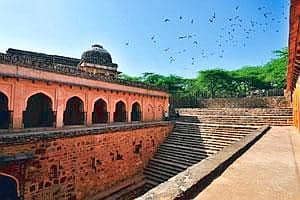 On the cover of the book Steps to Water: The Ancient Stepwells of India, novelist Anita Desai describes baolis as “a profound world of myth, philosophy, belief, beauty, and understanding".

“Connected with well and groundwater aquifers," says Delhi-based conservation architect Ratish Nanda, “baolis were built to collect rainwater during the monsoons and allow people to access the receding water through the year."

K.K. Muhammad, superintending archaeologist of the Delhi circle of the Archaeological Survey of India (ASI), describes baolis as air conditioners, “their chambers and passageways kept cool by the water".

“Baolis were also social networking sites," says Jutta Jain-Neubauer, author of The Stepwells of Gujarat, the first book ever written on baolis, “where people gathered to escape hot afternoons."

“The baolis of Delhi stand nowhere to those of Gujarat," admits Muhammad. “Dedicated to gods, stepwells in Gujarat were lavishly carved. Delhi’s baolis date from a much later period and are less artistic."

The most neglected of the city’s monuments, baolis tell of a time when men followed their quest for water through means more gentle and humble. “Then, men dug earth to reach water and now, we steer the course of rivers to force water to reach us," says Rakhshanda Jalil, author of Invisible City: The Hidden Monuments of Delhi. “Compared to dams that destroy nature and communities, baolis were ecologically friendly."

American photographer Morna Livingston, the author of Steps to Water, has perhaps described the baoli most evocatively: “Wherever a stepwell links brilliant Indian sun to a clear pool of water, two separate worlds are joined. In the well’s stone corridors people move between one realm and the other. The diminishing light descending the stairs conveys a sense of passage deep into the earth, moving further into darkness. Excavation is balanced with construction—one pair of opposites in a series that includes sky and water, solid and liquid, empty and full. The experience is mesmerizing."

The Gandhak ki Baoli in Mehrauli

One baoli lies adjacent to the high-rises of Connaught Place. Another, the city’s biggest, is in the Firoz Shah Kotla ruins, where it’s pumped to water the gardens of the complex. Tughlaqabad Fort has five baolis. Purana Qila and Lal Qila have a baoli each. There’s a stepwell in Vasant Vihar that can be viewed from the roof of an adjoining building. One baoli-like structure was accidentally discovered a few years ago in the congested Ballimaran in Old Delhi. The baoli behind Hindu Rao Hospital in north Delhi has been taken over by dry grass. The baoli in the dargah of Khwaja Qutub Kaki in Mehrauli is claimed by plastic bags.

The few baolis that remain accessible must be visited in summer. Cold, damp and quiet, these stepwells are an oasis of solitude, rare in this crowded, noisy, smoggy metropolis.

“Delhi-wallahs gathered in baolis to flee from summer heat," says academic-activist Sohail Hashmi, a walking encyclopaedia on the city. “There they lounged, slept, played chauser and pacheesi with friends or smoked hookahs."

Today, the few who visit baolis go there either to meet their lovers, or to get away from the world.

The Agrasen ki Baoli near Connaught Place in Delhi

Although the baoli is dry, the air is cool even at the peak of summer.

Until 2002, it had water. In the baoli’s lower reaches, the sunlight fades. The gurgling sound of hundreds of resident pigeons echoes off the stone walls. Hidden in the various nooks and bays of the baoli, the birds frequently fly out with a great flapping of wings. Photographer Raghu Rai took his famous photo of a boy diving into the water one late afternoon in 1970.

Since a baoli is built below ground level, its architectural aesthetics can only be appreciated once you enter it. At Agrasen ki Baoli, the experience is more intense because the steps of the baoli and the high-rises of Connaught Place present a dramatic contrast: the 14th century joining the 21st century in one straight line.

The high-rises, Muhammad says, are the reason why baolis cannot be restored to their original self. “Multi-floor buildings claim more water and so the level of Delhi’s water table has plunged. We cannot refill baolis with water."

The baoli in the Sufi shrine of Nizamuddin Basti is the only stepwell in Delhi to have an active underground spring that ensures a continuous supply of fresh water. For centuries, pilgrims stopped at the baoli to sip its blessed water. For years, the boys living in Nizamuddin Basti dived into the baoli—especially when it was flooded with monsoon rain—from the roofs, windows and ledges of the surrounding houses and from the top of the baoli wall from the other side.

Over the decades, the water of Hazrat Nizamuddin’s baoli became toxic with decomposed muck. In 2009, a renovation project undertaken by the Aga Khan Trust for Culture and ASI managed to reach the well’s foundation.

Today, the water looks clean. A new generation of neighbourhood boys climb on the roofs, jump into the water, swim and go back to the roofs to jump again.

It’s a late afternoon in March. The sun’s glare is white. The Rajon ki Baoli in the Mehrauli Archaeological Park is empty. The well is dry. In her book Delhi: A Thousand Years of Building, Lucy Peck calls it “the prettiest baoli in Delhi".

With 66 steps, the baoli’s top floor has a row of arched niches, which are cool inside. There is no noise save that of aeroplanes preparing to land at the Indira Gandhi International Airport. Bring a novel, a flask of chilled beer and it becomes a perfect place to while away a summer afternoon.