Mrinalini Sarabhai had a double connection with Jawaharlal Nehru—her mother Ammu Swaminadhan was a freedom fighter and a politician who knew Nehru well; her husband Vikram Sarabhai’s family too had a close association with him. In her autobiography, The Voice of the Heart, Mrinalini mentions meeting Nehru when he had come to Chennai and had a meal with her family. “I don’t remember the year clearly. It must have been between 1926-28, when he was the general secretary of (the) All India Congress Committee. We rode in our car, down the Marina, and on all sides, the crowds surged and waved back, I have only a hazy recollection as a child but it was a tumultuous welcome to Panditji, who stood up to greet the crowds while my mother and I sat beside him. Then again in Santiniketan, when he came to open the new Hindi Bhavan Hall with his daughter Indira, he made a few of us sit down in the frame of an artistic window and took a photograph of Buridi (Nandita Kripalani), Indiraji and myself."

Sister-in-law Leenaben Sarabhai’s family and the Nehrus were friends too. In a translated email interview, Leenaben, 95, recollects meeting Nehru for the first time when he visited their house in 1921, during a trip to Ahmedabad to meet Mahatma Gandhi. She says he used to come to their house with his father, Motilal Nehru, and sometimes with the whole family—mother Swaruprani, wife Kamala, two sisters Vijayalakshmi and Krishna. In later years, Nehru’s brother-in-law Ranjit Pandit would also join them. “The family would always stay for a few days. At the time, we lived at the Retreat, a very big house with spacious grounds."

One among eight siblings, Leenaben says she was always given the freedom to interact with the guests and found that “Jawaharlalji was extremely approachable. He was jovial and open, and his laughter was very attractive". She recollects putting up a dance performance for him when he was a guest at the Retreat. “In the later years, whenever we met him, I always carried a red rosebud and used to fix it on his achkan."

Nehru was very encouraging about Mrinalini’s dance performances. In 1948, she first performed Manushya, a dance-drama, in New Delhi. “In those days, Kathakali was not approved of and not many people appreciated it, especially in Delhi. But Jawaharji came for the performance and afterwards he came to see me. He hugged me and congratulated me. There is a photograph of us together," she says over the phone from Ahmedabad. 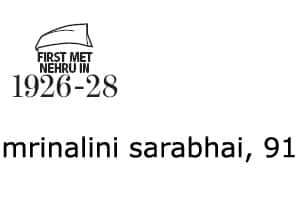 A few years later, the photograph was published in a Swiss paper with a caption which read that the image was forbidden for publication in India. “Vikram was very amused and even wrote to Jawaharlalji telling him about the ‘foolish caption,’" she recalls with a hearty laugh.

Mrinalini says she always made it a point to invite Nehru to her recitals in Delhi. “He always told me not to wait for him in case he was late for my performance. He was a very punctual man and if for some reason he was late, he preferred to slip into his seat quietly rather than making a fuss. In fact, a couple of times the organizers wanted me to wait until Jawaharlalji arrived, but I never did because I knew he would not have liked that."

Nehru also visited Shreyas Foundation (set up in 1947 in Ahmedabad by Manorama and Leenaben Sarabhai with the aim of providing education) twice. “He freely mixed and played with the children at the foundation. He often sat on the hood of his car. People cheered and ran after his car. Sometimes he got irritated and even angry when they did that."

Whenever Leenaben visited Delhi, she was invited to breakfast with Nehru. “He preferred that because that way he would be free to spend some time with us," she recalls.