The ending of the Fed's QE programme is not a sign of recovery, but an indication of the bind they are in

Talking about markets today in the context of Lehman’s demise six years ago is fast becoming a September tradition with financial pundits. Lehman has become emblematic with the bursting of the credit bubble and the ensuing financial shock is still etched in everyone’s memories (as is the much used picture of the unknown employee carrying a cardboard box out of the building). Therefore, the rapid recovery of joie de vivre by financial markets arouses suspicion of another Lehman being just around the corner, especially in light of the moribund global economic recovery.

The global growth rate at 3% in 2013 was the lowest in a decade (based on IMF WEO database April 2014). Further, the recovery is still sluggish by this metric as evidenced by the International Monetary Fund (IMF) and the Organisation for Economic Co-operation and Development (OECD) lowering their 2014 growth forecasts. This has forced major developed market central banks to dogmatically pursue an extraordinarily accommodative monetary policy leading to a spectacular revival of asset prices and risk taking in financial markets.

Now, with the US Federal Reserve (Fed) near the end of its quantitative easing (QE) experiment (the Fed was expected to end the bond-buying programme in October at the time of going to press), the question for investors is whether the markets will continue to move up or life support is being switched off. 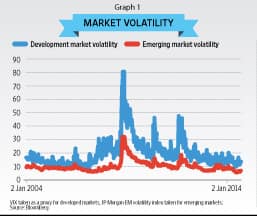 At this point, you might argue that low volatility is not necessarily a precursor to financial crisis. Further, even though the Fed is proceeding towards normalizing monetary policy, it is doing so slowly and other central banks are likely to continue with loose policy (or loosen them further as in the case of the European Central Bank, or ECB). Therefore, the markets’ sanguinity is justified. While it is true that central banks of developed nations are unlikely to tighten monetary policy sufficiently any time soon, the argument ignores Minsky’s great insight into financial markets.

Hyman Minsky, the late US economist, propounded the theory that financial market bubbles are essentially debt-fuelled. He posited that economic growth leads to increased borrowing. Initially, this is used for productive purposes and repaid from the income generated.

However, as the boom continues, increasing asset prices support ever larger quantities of debt. Borrowers expect to repay not through income, but from capital appreciation. At this stage, new debt is taken just to pay back old debt (what Minsky termed as Ponzi finance). This is the point of instability that eventually triggers a financial crisis (dubbed the Minsky moment) due to the vicious spiral where borrower distress leads to asset fire sales and consequent price declines lead to further distress. The 2007-08 credit crisis was a classic Minsky moment. In addition to private sector debt, government indebtedness has also increased due to expansionary fiscal policies enacted to fight the recession and lower tax revenues due to muted growth. The US government debt-GDP ratio has increased from 63% in 2006 to 100% in 2013 (based on data from Trading Economics; corresponding figures for the euro zone are 70% to 93%; the UK 43% to 91%, and Japan 175% to 227%). Here also, central banks have made the government’s debt burden more bearable through reduced interest rates and direct purchases.

Their short-term success can be gauged from the fact that Greek bond yields are below 6% even though Greek debt-GDP at 175% is higher than when it defaulted in 2012 (and when yields were well beyond 30%).

However, central bank action has only delayed the Minsky moment as the problem at the core of the credit crisis, that of excessive indebtedness, still remains. Moreover, central banks’ failure to achieve their professed goal of higher growth and inflation is exacerbating the problem by making it difficult to reduce debt burden naturally over time without painful deleveraging.

In light of these issues, the Fed and other central banks are unlikely to normalize interest rates any time soon. The ending of the Fed’s QE programme is not a sign of recovery, but an indication of the bind they are in. The stated move towards policy normalization is a signal to the market in the hope that there is greater appreciation of risks among participants and consequently a move towards lower debt. However, since tightening can bring forward the Minsky moment, any reduction in QE needs to be matched by dovish statements and continued low rates. This not only leads to dissonant policy, but causes violent market reactions on trifles such as the use of one word over another. Other central banks are also caught in the same situation.

At some point, central bank attempts to square the circle are likely to fail unless growth accelerates. The astute investor needs to guard his portfolio against the Minsky moment. Buying insurance for the medium term in the form of out-of-the-money put options on risk assets makes sense especially given the low volatility. After all, the need for watchfulness is the greatest when the seas are calm.