On one of her trips to Arunachal Pradesh, documentary film-maker Anu Malhotra came across a man from the Apa Tani tribe carrying a cane flask so ingenuously woven that it could be used to carry liquids. After she had a sip of the rice beer it held, she launched into an hour-long plea to buy the flask off him. He refused. Nobody in his village knew how to make them any more.

Her multimedia exhibition will showcase around 70 large-format photographs which were shot while she filmed The Apa Tani of Arunachal Pradesh and The Konyak of Nagaland in 2000-01, and during her personal travels across Tibet in 2002. Excerpts from her films and installations of handicrafts, such as shawls and baskets, will accompany the photographs.

The photographs are a corollary to and embedded within Malhotra’s wide-ranging documentary work—which stem out of a curiosity rooted in her days as one of India’s first travel show hosts for Zee TV’s Namaste India in the early 1990s. 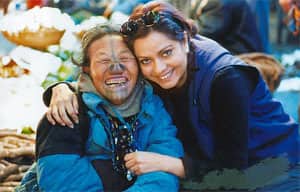 Given that the Apa Tani have rarely been documented because of their inaccessibility, Malhotra was surprised by how nonchalant they were about the presence of her four-member crew. What drew her to the particular tribe from among the 26 in Arunachal Pradesh was the story of the legendary beauty of the Apa Tani women. Legend has it that they were so beautiful that the tribe would fall prey to neighbouring tribals, so nose plugs (called yappin-hoollo) were devised to make them appear unattractive to other tribes. Village councils banned nose plugs in the 1970s; now, only the older women in the village still wear them. The other sociological aspect—not so visibly represented in her photographs—is the institution called the “Buning", which is a network of friends spread across villages, who are there to help you with anything from a mithun (a bovine species) for a feast to rebuilding your huts. “That is how this wonderfully networked society puts someone back on their feet after an accident or a fire," says Malhotra.

The other big leg of her exhibition is on the Konyaks of Nagaland. Malhotra took to the tribe that is known to be one of the fiercest because it has been less documented than the dominant Ao Nagas.

The Konyaks were headhunters (this too was banned 50 years ago). Academics theorize that the practice stemmed from the belief that the head contained “soul matter" which could be harnessed through its capture. But the primary lesson for her was the high status accorded to village elders. Malhotra’s images show Aoling, the Konyak spring festival when men deck up in the traditional headhunter’s gear.

All profits from the exhibition will go to two non-profit development organizations that work for the Apa Tani and the Konyak tribes. Apart from the photographs, priced between ₹ 30,000 and ₹ 1 lakh, Malhotra has merchandise such as T-shirts, scarves, saris and stationery inspired by motifs from the two tribes on sale. The idea is to brand a sustainable initiative that will work in a twofold manner: help popularize indigenous culture and channel the proceeds back to the community.

Soul Survivors will run from 23-25 April at The Stainless, Mathura Road, New Delhi.