Halfway into Lanterns on Their Horns, Radhika Jha’s second novel after Smell, it’s hard to fight the growing feeling that this story was born as satire but took life as metaphor. Somewhat like Kamadhenu alias Soorpanakha, the bounty-bestowing cow at the centre of this ambitious, well-intentioned but not entirely satisfactory parable of a village caught, literally, at the crossroads of change. 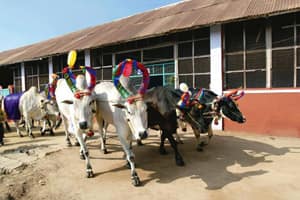 Chew on it: Jha centres the tradition-versus-modernity debate on cattle. Dinodia

All eminently plausible, one would think. But there’s an earlier scene where a worker at a rural development institute masturbates Govinda, a Spanish super-bull who will be Kamadhenu’s father, in order to collect semen. The scepticism and distance bred by the near-surreal feel to this section of the book—in which Manoj, a history student, decides he has found his true calling in breeding cattle based on a chance encounter with a blonde named Durga—lingers long after the author moves into the main theatre of action, Nandgaon. Like the cow that holds up the novel, however, Lanterns comes across largely as black and white. Much as Jha tries to people it with grey characters—especially the villagers—the attempt backfires, so much so that the motivations and impulses of key players are often obscure. What prompts Manoj to leave his blonde goddess, marry a stranger and head towards the rural development institute? Why does Laxmi never use her agricultural education—and what makes Manoj’s wife consider employing her as a domestic?

Too many issues crowd Jha’s canvas: There’s AIDS, the truck drivers’ disease that must not be named; there’s block-level politics; women’s empowerment (or the resistance to it); natural calamities; deforestation; religion in politics (though, significantly, Nandgaon seems to be uniformly Hindu), farmer suicides...phew. They overwhelm the many fine touches that still manage to surprise the reader, the most endearing being the characterization of Kamadhenu’s unnamed mother. The cow’s-eye perspective is sensitive and relevant in a way often missed elsewhere in the novel.

Rural India has not been the subject of much Indian writing in English and Lanterns is an exception on that front. That said, it also explains why the lacuna exists. Painstakingly researched as this novel undoubtedly is and idealized as Nandgaon seems to be, it seems to be unable to conceal—like The White Tiger—a basic unfamiliarity with the dynamics of the backdrop. This is how urban India perceives rural India to be...and that’s simply not good enough for a writer of Jha’s obvious calibre.