When a Delhi-based scion of an old industrial family called a few friends for dinner last week, there was a surprise on the menu. Despite the considerable reputation of the retinue of family cooks, all the food, from the Panko Crusted Bharwan Mirch with Goat Cheese Mousse and Chilli Aam Papad Chutney or Roast Scallops Balchao with Sabudana Papad and Kokum Powder, bore the unmistakable signature of Manish Mehrotra. The chef who is at the helm of Indian Accent, the nouvelle Indian cuisine restaurant at The Manor, New Delhi, is among the new breed of celebrity chefs who are bringing the haute cuisine experience to the homes of their gourmet patrons. But Mehrotra says he is an accidental caterer: “When we launched Indian Accent, a catering service was not on the cards. But the offers kept pouring in, and eight months later, we started catering." From attendant sommeliers, gourmet ingredients flown in from overseas, to pre-plated five-course meals, it’s all on the menu. “Wood-fired pizzas, American grills, and live sushi bars are popular. Once we did a take on the yule log with goat cheese and whipped brie for the crackers," says Varun Tuli, chef-restaurateur who turned caterer in October with his Gurgaon-based Food Inc by The Yum Yum Tree.

It gets ever more exotic. “Till recently, the insalata caprese was the rage with its buffalo mozzarella. Suddenly, it’s not enough. Now people want a caprese with burrata," says food consultant and restaurateur Marut Sikka. On a few occasions, he has provided logistical support to chefs flown in from abroad. “Some people even ask for a Michelin-starred chef or two!" adds Sikka.

The services start at ₹ 2,500-4,000 per plate—excluding tax, transportation and alcohol—and it’s not unusual for prices to cross the ₹ 10,000 mark. At that price you may ask for beef from Kobe or caviar from the Caspian Sea. 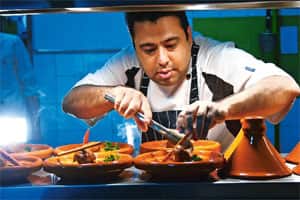 Exclusively yours: Manish Mehrotra limits his catering orders to 20 plates.

When it comes to entertaining at home, New Delhi is the undisputed capital, says restaurateur A.D. Singh. Singh’s Olive brand began catering services when it opened in the Capital a few years ago. He now operates a separate kitchen in Okhla, Moving Kitchen, and has widened Olive’s standard oeuvre of Italian and Mediterranean to include Japanese, even Indian. In the six months since its launch, Food Inc has catered for about 20 parties a month on an average, says Tuli. “But then, it was the party season in Delhi. With summer here, there aren’t likely to be so many orders," he says.

Who knows? Some Delhi socialite may decide to throw a caviar and cocktail party.

Rachana Nakra contributed to this story.