Thanks for Visiting Mint
You seem to have an Ad Blocker on. Please turn it off in order to continue, or whitelist Mint
HOW TO TURN OFF AD BLOCKER
OR
REFRESH IF YOU ALREADY TURNED OFF THE AD BLOCKER
Home >Leisure >Against the tides

His mind blank, his life seemingly shattered, Nitin Mongia repeatedly wondered if he would ever see his then three-year-old daughter get married. For six months, he battled the devils in his mind, struggled to fight off depression and “wondered about his life". Then one day, he just went sailing and snapped out of the biggest crisis of his life.

For around 30 years, sailing had been his life and in 2005, sailing saved his life. 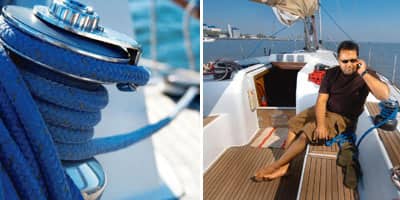 Guts and glory: Nitin Mongia is a two-time medallist at the Asian Games, and has won around 30 national titles in different sailing categories. Abhijit Bhatlekar / Mint

At 37, the heavyset, bespectacled man does not carry his sporting prowess in an obvious way. But he literally wears it on his sleeves, thick forearms that indicate a grasp over a robust sport which has won India many international medals. His weight, challenged by the daily dose of drugs, fluctuates, as sometimes does the mind. “I keep saying I am going to quit and then I want to be in another one," he says, sitting, appropriately, by the sea at the Breach Candy club off Warden Road in Mumbai.

He has been suffering from leukaemia since 2001, but it was discovered only later. In 2004, he was completely fatigued during an event in the UK, but the moment passed and he forgot about it. In 2005, he failed to finish an event for the first time owing to sheer exhaustion—that was when he stepped into a clinic for a check-up. “As soon as I found out, my mind just went blank. I thought I was finished. It took me six months to snap out of it," he says.

He drew encouragement from knowing that some of his best triumphs had come after he got the ailment, but before he found out. He won a silver medal in the 2002 Busan Asian Games in the OK Dingy class, followed by a world title in 2003 and another silver at the 2006 Doha Asian Games in match racing, besides around 30 national titles.

Ramachandran Mahesh, once Mongia’s sailing opponent and now his partner, was among the first to find out about Mongia’s cancer but says he never felt his performance was affected. “In the 2006 Asian Games, he would be violently sick the whole night and the next day would be competing. Nobody even knew or found out about it, except for the federation officials who had to be told about the drugs because of the dope tests... The way I have seen him suffer, his power and determination is phenomenal. To sail for 7-8 hours without regular meals while being on medication, to throw up several times but continue doing the job on hand… Any other person, including me, would have thrown up his hands," says Mahesh.

The years of physical training helped deal with the crisis that left his family shattered. His daughter Krisha, now 7, found out only recently about her father’s illness because Mongia never made his suffering obvious. He says it’s not something that he thinks about or features in his daily life. “I have always been strong physically, which helped carry me forward. If you stop thinking about it, you will be fine. But if you don’t, then you might not want to do anything."

Mongia’s doctor could not comment owing to reasons of confidentiality. Hari Menon, an associate professor of medical oncology at the Tata Memorial Centre in Mumbai, says that while medicines are known to cause fatigue and muscular pain, the intensity varies. It’s controllable, just like diabetes and hypertension, says Dr Menon, who was speaking generally about CML and is not familiar with Mongia’s case. 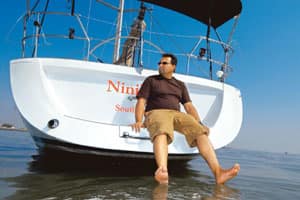 His hospitality and catering business in Mandwa, near Mumbai, is growing but Mongia is acutely aware of the heavy financial burden cancer has left him with. His average monthly expense, he says, is around Rs2.2 lakh, which is subsidized by a pharmaceutical company. Finances are also important to pursue his medal hopes: in the match-racing category of the Asian Games in Guangzhou, China, in November and in the 2012 Olympics in the Finn class. The latter, which is a solo event, will require sponsorship.

The optimism that saw him beat the illness is currently missing. Mongia, whose next big challenge is immediate (the Asian Sailing Championship in March in Shanwei, China, for which he and Mahesh got selected with two others), says it’s tough to find sponsors for “someone participating out of the country".

Then, with typical dispassion, he stands up, shrugs and says it’s time to move on.