The Guerrilla Girls and other aliens land in Kochi

The port city of Kochi welcomed aliens this week.

The first female curator of India’s largest biannual art event, Anita Dube, has climbed a high watchtower, seeking out those working in spaces far beyond what is visible of the contemporary art world.

As might be expected from an early member of the Indian Radical Painters and Sculptors Association, 60-year-old Dube’s curatorial theme references the French Marxist theorist Guy Debord. For the ongoing fourth edition of the Kochi-Muziris Biennale (on till 29 March), she has actively sought women with no formal training in art, people from the queer community and Dalit artists, among others, and welcomed these aliens of the art world to share space alongside celebrated giants such as William Kentridge and Jitish Kallat.

At a preview earlier this week, Dube called attention to Bapi Das, a former autorickshaw driver from Kolkata, whose fine threadwork needs a magnifying glass to be appreciated. She has been particular about including artists from countries such as Indonesia, Kenya, and Egypt in an attempt to balance the American and Euro-centric skew of the international art world.

But at a breakfast talk hosted by BMW, when asked what her singular wish for the art world would be, Dube exclaimed to the audience: “Give it to the women."

The Guerrilla Girls are Dube’s dream come true. It is a collective founded with a mission to fight racism and sexism in the art world, highly relevant in the age of #MeToo and especially in a year when a cloud of uneasiness hovers over the biennale as a series of anonymous allegations of sexual misconduct against its co-founder Riyas Komu haven’t been formally addressed so far. And allegations against one of India’s most valued artists, Subodh Gupta, have also surfaced this week. The shifting collective of around 50 anonymous women artists was founded in New York in 1985. They hide their identities behind gorilla masks and each member takes the name of a dead woman artist as a pseudonym.

I had been mailing “Frida Kahlo" to set up our meeting in Kochi. When we finally meet, I have to first ask who all know their identity. I’m meeting “Frida Kahlo" and “Käthe Kollwitz", both founding members.

A sense of humour, more often than not, goes a long way in negotiating contemporary art. There were two women sweeping the room in which the Lebanese artist Walid Raad’s work is displayed when I visited. A group of visitors asked me if the sweeping was part of the artwork. I told them it was.

What really works in favour of the Guerrilla Girls is that alongside their hard stance on gender rights, facts and raw data to make their point, their art is hilarious. They are provocative not prescriptive. The story goes that they were originally meant to wear ski masks to hide their faces but when one of their gang accidentally spelt guerrilla wrong and wrote gorilla, they thought it would be funny to wear monkey masks instead.

“From the very beginning…we have tried to twist an issue and say it in a way you haven’t heard before. Prove it with facts and make people change their minds," says Kahlo. The group uses the mechanism of political activism and advertising (statistics, bold colours, bold language). At the biennale, their posters are on view in outdoor and indoor spaces in the event’s main venue, Aspinwall House. One of their iconic posters titled “Don’t Stereotype Me" has even been adapted to a local context. The Malayalam version lists popular gender stereotypes hurled at women in Kerala, from thevidichi (slut), randanamma (stepmother) to monchatti (pretty one).

One video, titled The Guerrilla Girls’ Guide To Behaving Badly, instructs women to “Be crazy, be anonymous—it helps focus attention on the issue and not on personality, be an outsider, look for subtext, look for the understory. Fight tokenism. Be a creative complainer. Be a professional complainer…."

In recent years, they have had mainstream intersections, including shows at UK’s Whitechapel Gallery and the Tate.

One of the posters on view here is pro-choice. Some women’s issues are universal but some are specific to a culture. In India, a pro-abortion stance is complicated given the high incidence of female foeticide, I point out. “While the collective has a diverse mix of women, including South Asian women, our concerns are primarily North American because that is what we know," Kahlo says. “We can’t presume to speak for other cultures. We might be a model for feminist movements in other countries and we would love to assist them in dealing with the issues that they know about."

“But then you don’t need to be a Guerrilla Girl to do the kind of work we do. We travel around the world and do workshops with people sharing our crazy strategy of combining facts and humour," says Kollwitz.

Their ongoing project investigates the art world’s links with money and power and corruption. “There is money laundering, smuggling, tax evasion, insider trading… all sorts of things have been going on for a long time," says Kollwitz. While the Guerrilla Girls maintain their private practices outside of their anonymous identity, this has been a particularly remarkable year for the collective.

True to their aura of anonymity, Kahlo and Kollwitz say they met Dube for the first time this week after they arrived. Are they allowed to tell their family that they’re a Guerrilla Girl? “We kind of have to," says Kollwitz. “How do I explain going to India for a week with a gorilla mask in my suitcase?"

The Guerrilla Girls are inspirational in everything they stand for. A group of people attending the biennale were emboldened enough to use the Q&A time after the artists’ lecture performance on 14 December to present a questionnaire to the biennale management about their handling of the Riyas Komu case and the general complicity of the art world. The Guerrilla Girls pledged to amplify these efforts. It was a dream of a platform. One that birthed many more guerrilla girls this week. 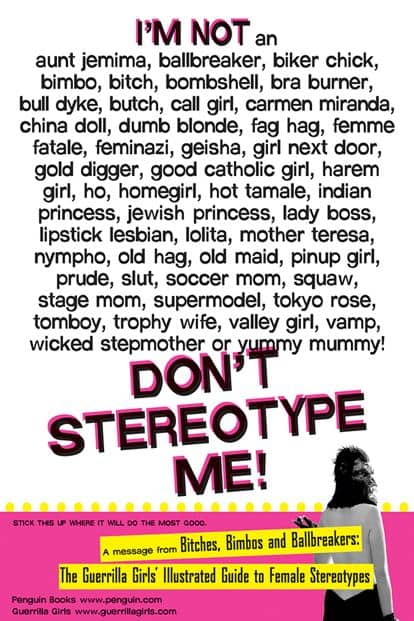 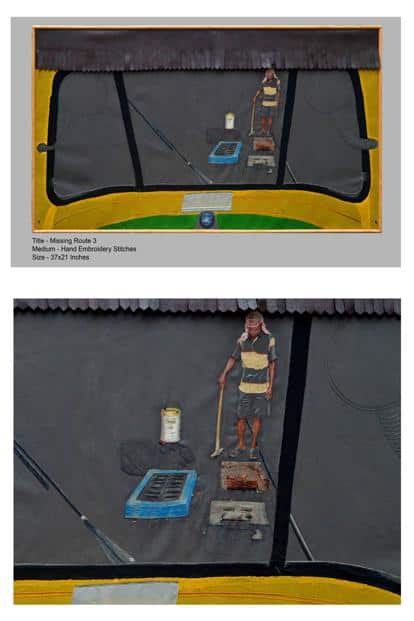 Bapi Das: Till last year, Das worked as an autorickshaw driver in Kolkata. The tableaux he depicts in fine threadwork are perspectives through a windshield.

Vinu V.V.: Born to a Dalit family in Kochi, Vinu’s art engages with social injustice. On view at the biennale are three totem poles with hundreds of wooden figurines nailed through and an axe-wielding worker with his head covered in black cloth. The sculptures are made with wood of Odollam tree, known as the suicide tree as it yields poisonous fruit.

Aryakrishnan: Aryakrishnan presents Sweet Maria Monument, an ode to Maria, a transgender activist who was brutally murdered. The installation is a response to a call for making spaces for the queer community: there is a bed, a coffee table. It is an interactive, living archive where viewers are encouraged to sit, make a cup of tea and engage.