Videocon's new smartphone is a rare device which excels beyond its specs, but is still not at par with its rivals 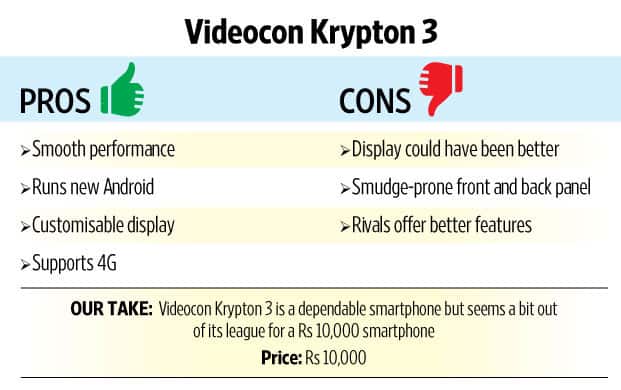 Better known for its TV and home appliances, Videocon is trying to establish itself as a serious contender in smartphone business as well. It is one of the few phone makers who have set up their manufacturing units for smartphones in India. Their latest smartphone, Krypton 3, priced at ₹ 10,000, is one of their first made-in-India smartphones, and is competing against the popular Chinese-made Redmi Note 3 ( ₹ 9,999) and the Lenovo Vibe S1 ( ₹ 12,499).

Design is a key area where many Indian phone makers have yet to find the right balance between good looks and user comfort. The Krypton 3, despite its plastic exterior, feels solid and handy. We are not very impressed with the choice of material though. The glossy blue finish on the back smudges a lot while the metal band along the side panel looks so shiny that you can’t really tell if its gold plated or some other colour. At 143g, it is pretty handy and at par with other 5-inch smartphones. Even though the volume and power/screen unlock button is placed higher up along the side panel they are still easily accessible. The Krypton 3 comes with a 5-inch display with screen resolution of 1280x720p. The navigation keys are placed outside the screen which means users have access to a bigger screen. The display looks good and handles colours well. Visibility under bright light is poor, however the wide viewing angles are solid. The phone allows users to customise the colour and contrast levels, which is impressive. It also comes with a layer of scratch-resistant DragonTrail glass. Though it didn’t pick any scratches, it is quite susceptible to smudging. Though the display doesn’t suffer from any major inconsistencies, at this price point we have seen better displays. One of the key selling points of the Krypton is the latest version of Android (Marshmallow) it runs with two UIs. The default UI follows the same layout as plain Android but with a redesigned app drawer and app icons. While the secondary interface looks just like stock Android UI. Videocon has added a few gesture controls which you can customise to unlock the phone by double tapping on the screen or open the camera by drawing C on the lockscreen. These work well and can be handy for getting on what you want instantly. Videocon has bundled 6 months of free access to premium movies from Eros Now. Usually Eros Now charges ₹ 99 a month for them.

Though the device runs on MediaTek’s MT6735 quad-core processor with 2GB RAM, it was able to handle most tasks and games without any hiccups. Even games such as Asphalt 8 and FIFA 16 played out well with no heating up on the back. Switching between apps and even the usual navigation is quite smooth. The smartphone offers 16GB of storage and can accommodate another 64GB via micro SD cards. The phone’s dual SIM slots support 4G networks and you can also make 4G VoLTE calls over it. The 13-megaixel camera is a mixed bag. While it scores in terms of detailing and sharpness, colours look washed out even in outdoor shots. Indoor shots look noisy and washed out too even with the flash on, which makes it a weakling in low light. The 5-megapixel camera on the front is wide and takes crisp-looking selfies under good-light.

The Krypton 3 doesn’t really impress with its specs and doesn’t have any standout features. But in terms of day-to-day performance, it is very consistent. Besides that, there is nothing that really makes it better than its rivals. The Redmi Note 3 offers a bigger and better display, packs in a bigger battery, better design, superior camera and offers a fingerprint sensor as well at the same price. If you want a small screen phone, the Vibe S1 is a better bet on account of its display, better design, superior interface and camera.