On the face of it, it causes no bodily harm, only mental discomfort. But that is because we tend to accept that the mind is different from the body. And surely, this has nothing to tell us about our man-made environment, the focus of this column?

We may well be wrong on all counts. In particular, the body’s response to seeing may govern our attitude towards, say, minimalist or ornamental design.

Seeing is obviously a bodily process. But does visual pleasure or discomfort have bodily implications? I don’t plan on answering that question. However, exploring the idea leads to valuable insight into the design of an environment and our approaches to it.

What the eye sees

Sight involves at least two steps. First, the image of the object is formed on the retina. Second, the brain has to process the image and decide whether it represents an apple or an abacus. The processing part is where things become interesting.

Take the classroom punishment. Some well-regarded research suggests that our cognitive apparatus (which makes sense of the retinal image) needs some amount of complexity in the visual field. Our brain also likes to be able to organize what it sees into some basic structure, which starts explaining the nature of the ordeal the punished child goes through.

With the blank wall in his face, the child’s brain receives an image that has very little complexity (how many differences can you find across the expanse of a blank wall?). The lack of any visual “incident" also denies the child’s brain the opportunity to “break up" the wall into a pattern of discrete parts (though the desperate child might start noticing patterns in the cracks in the paint). Much like an adult faced with a page of dense writing not broken into paragraphs, the child experiences great cognitive discomfort. Since any discomfort the brain faces has a physical aspect, the punishment is, ultimately, to the body.

What does this have to do with design? Quite a bit if we accept that the same mechanism is in play when we look around on the street or inside a building. 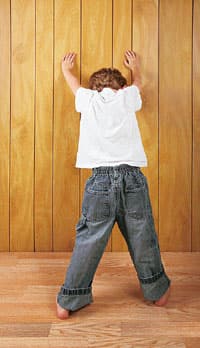 One reaction to this chaos outside may be to try for complete calm inside buildings. This route often leads (though not necessarily) to minimalist design.

Modernist architecture created a new approach in the early 20th century which banished all “chaos" (ornaments, intricate shapes, shadows and colours). It believed in a monotone architecture of unadorned spaces and surfaces. The slightest bit of ornament was considered “dishonest" because it “hid" the real construction material or detail. Chandigarh, designed in the 1950s by French architect Le Corbusier, is an example of a modernist city. Corbusier’s dream was a city with regularly spaced and similar buildings in the same material: unadorned, exposed concrete. This offered little complexity with lots of order.

Ever since, good design is often expected to be minimalist. Hushed empty spaces and minimal visual incident are valued — for good reason. It can also provide a calm compensation for the city.

But take it too far and the blank white wall can give you a headache (from a running cognitive apparatus, with nothing to process). Talking about physical pain here may be stretching things. But if the public today votes for what purists call over-decorated confectionery, at least a part of the blame lies in the way the mind’s eye has been wired. Another part lies with architects who have disconnected from that circuit. The simple is, after all, difficult to make profound.

The author is a Goa-based architect and writer.

Write to us at bodylines@livemint.com