In Goa, a state rarely associated with handlooms, lies a compelling story of the reinterpreted Kunbi weave

Last month, when a small consignment of Kunbi saris arrived at the Wendell Rodricks Design Space in Panjim, Goa, an offbeat story from 2011 got updated. Rodricks had showcased the Kunbi saris on the ramp as part of his Spring/Summer collection at that year’s Wills Lifestyle India Fashion Week (WIFW) in New Delhi.

In the late-2000s, Rodricks decided to undertake a Kunbi weaving project to revive the almost-extinct traditional sari that used to be worn by the Goan tribal Kunbi women before the advent of the Portuguese in the 16th century. But since the WIFW show four years back, he had been refusing to take orders since the project was suspended owing to challenging logistics.

Then last month, Rodricks sent out a missive on Facebook about their renewed availability. At his store, however, only five Kunbi saris were on sale, the remaining 35 waited in the studio as pending orders. I was also on that waiting list as the first 12 pieces of Rodricks’ reinterpreted Kunbis had gone to prominent sari enthusiasts, including Congress party president Sonia Gandhi and her daughter Priyanka Gandhi.

At the 2011 WIFW, senior textile art historian Jasleen Dhamija and actor Nandita Das, a sari enthusiast, had addressed the audience about the Kunbi project minutes before Rodricks showed his collection, which included other garments in global silhouettes using the same matrix of stripes and checks. But it was Lisa Ray, personally photographed by Rodricks, who became its fashion face. British designer Vivienne Westwood once spoke about how punk was rooted in the need to “f*** everything up" and destroy to create something new. Comparing loud and rebellious punk with an ignored tribal weave that originated in India’s favourite beach destination may sound outrageous. But think of Kunbi saris’ re-emergence now since its total disappearance during the Portuguese rule when the dressing styles underwent a considerable change. It is fascinating to reignite a past reality with new fuel. That’s what Rodricks did.

“While researching my book Moda Goa, I found that the only accepted aspects of Hindus in Portuguese ruled Goa were Brahminical symbols. This red and white drape of Kunbi tribals had disappeared over time due to caste discrimination. It deserved a revival, it was the only symbol of Goa’s weaving heritage," says Rodricks.

This is how he embarked on his Kunbi weave project with the help of two people. Poonam Pandit, a student of textile design from New Delhi’s National Institute of Fashion Technology, and the Pernem-based Baburao Babaji Tilve, fondly called Kaka, a weaver now in his late 70s, who is ailing and has handed over the work to his two sons, who weave when they get time off their day jobs. Traditionally, the Kunbi is a cotton chequered sari in red and white with a sturdy weave good enough to be worn for farming. It is worn short above ankles with a knot on the shoulder. Chequered cloth is considered sacred among many communities. In Ayurveda, white stands for sattvic or pure, and red for rajas or fiery and powerful. Explanations on Indian traditional costumes often dwell on these connects. But since this nomadic tribe lived on the economic and social margins, their handlooms disintegrated over time with no patronage for their costumes and weaves.

The weave disappeared from Goa from mid-19th century till 1961, the time the Portuguese left India, says Rodricks. Clearly, there was a gap in documentation after that. Until Rodricks refashioned the drape, thus creating something new by “detaching" it from its old constructs.

He changed the colour palette, reconfigured the patterns of stripes and checks and did away with the dobby border—a silken flat inset in the original Kunbi. He also diversified the weave beyond saris to handwoven textile for stylish resort wear. But the most intriguing part of this redesign was rejecting the traditional red and white combination for other naturally dyed hues. The blue is indigo, the red is manjistha dye and the black is iron fermented with jaggery, explains Pandit. Then there are drapes in onion pink and grey—all on a white field. 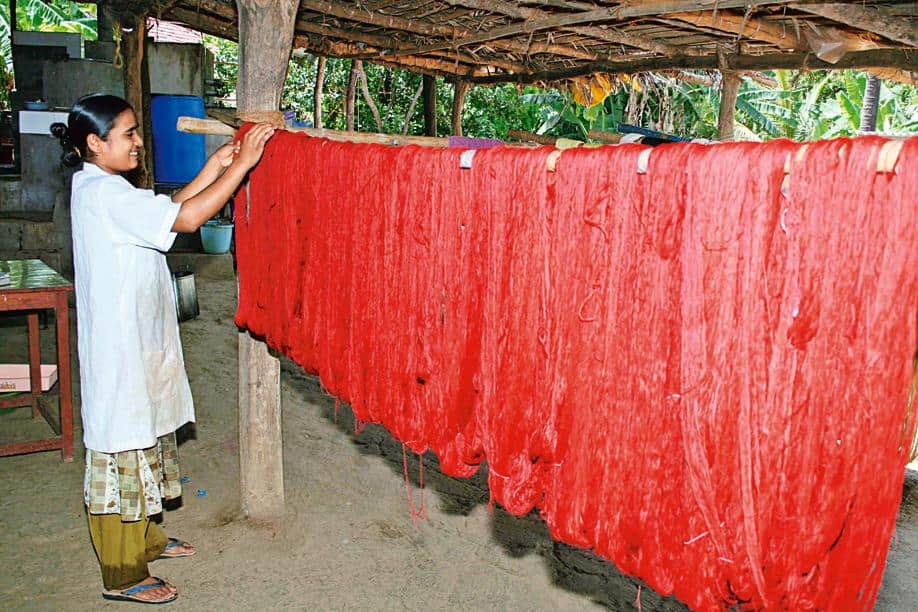 In effect, the Kunbi sari, which disappeared in Portuguese Goa, is today a sought-after garment among the fashion elite. Who says destruction as a liberating idea only defines the punk movement?

The revival took time. In Pernem, Kaka was familiar with the old Kunbi but only wove it for dhotis and kashtis (loincloth). Pandit says it took months to establish a rapport with him. She urged him to implement his skill in newer directions, began documenting the whole process and brought in weaving and design interventions under Rodricks’ guidance. Kaka, then 72, agreed to follow Pandit’s graphs of warp and weft, try the redesigned matrix of stripes and checks in natural-dyed cotton yarn. It took two years of Pandit’s constant work with Kaka for Rodricks’ Kunbi collection to be ready. The new weave was softer and mesh-like. They made saris, scarves, stoles and dress fabrics to create beautiful garments in easy, flowing silhouettes. “Kaka’s last creations before he got a severe paralytic stroke were for that collection. Before that he would eat and sleep near his loom," says Pandit wistfully.

From there on in 2012, the project was handed over to the Goa government. The state’s directorate of higher education, which approved a proposal sent by Rodricks and Pandit, released funds for the project to be continued at the Goa College of Home Science in Panjim. Pandit was hired as a consultant by the college to facilitate the setting up of handlooms and organize weavers—students and a master weaver is sometimes brought in from Karnataka. It’s at the college where the current lot of saris selling at Rodricks’ store has been woven.

Pandit now has her own label, Kalakar, where she interprets Kunbi stripes and checks for scarves, stoles and casual garments in subdued colours. She sells from a dozen-odd stores in Goa and abroad.

Bringing back a lost weave is a multidimensional journey that links artisanal skill, customs, bridging rural-urban divide and fashion. But it is worth asking if the Kunbi really has a commercial market. Graphic and minimalist in appearance, always on a white field, it is hardly the kind of textile that most Indians would pay for, beyond a select few who love anything that is limited edition. On the other hand, the Kunbi is unlikely to travel full circle and be available and affordable for the tribals themselves.

It is now a precious drape, to be looked after in urban wardrobes. “Take care of the Kunbi. Cool wash on low spin short cycle. And don’t tear the manjistha strips for a wound. Wear with the happiness it was woven with…" Rodricks writes in his email.

Kunbi saris are available for ₹ 6,500 at the Wendell Rodricks Design Space in Goa.

This five-part fortnightly series explores the linkages between new-generation weavers and the fashion and luxury market.