A template from the past revised, and a super light running shoe

The running shoe is no longer just about two layers of sturdy soles or complex foam layering. Reebok’s ZPump Fusion and Nike’s Free 3.0 take shoe science to the next step. Reebok improvises with a template from the past, while Nike has come up with a supremely lightweight invention.

Anyone who grew up in the 1990s would remember pump shoes—a small button on the side of the shoe could be pressed to inflate a thin chamber on the inside. Actor Martin Lawrence mentions them affectionately in the 2003 movie National Security. It was a fashion statement, though its usefulness was perhaps difficult to grasp.

The concept is back, with a modern twist.

The ZPump Fusion weighs around 278g. The air-filled cage sits around the ankle and the mid-foot. The idea is to create a lock-in feel around the contours of the foot—most useful while walking or running. Press the pump button on the shoe and 10 pumps later, you’ll see a noticeable inflation of the cage on the sides. Another 10-12 pumps and the mid-foot portion will feel well-cushioned. After 32 pumps, cushioning near the shoe’s tongue will be noticeable. You can safely do 60 pumps, but the sweet spot is at 40.

So the visual difference between an inflated shoe and an un-inflated one will be most visible on the sides, just below the ankle joint.

After 24 hours, you’ll notice some loss of pressure, so you will need to pump again. The air escape valve, located next to the pump button, can be pressed to deflate the air cage in one go.

The ZPump Fusion is comfortable to wear all day. The feet feel pampered and cushioned. The Fusion Sleeve, which is the entire top part, is a single-piece design. The reason for doing away with the sewing and stitching is because it can cause skin irritation and blisters. The air cage is integrated into the sleeve. You just need to be careful that the fabric doesn’t start tearing, since it tends to get stretched by the outward push from the toe at certain angles.

The foot sits on a moulded non-gel layer, which is attached to a geometric design midsole. It’s different from any of the other insoles Reebok has used. However, it doesn’t provide any bounce-back—this actually improves acceleration, but it can be disconcerting initially when you’re walking.

The ZPump’s outsole is inspired by car tyres and follows a similar tread design, angles and spread. The material offers great traction and allows for quick turns without the foot slipping. The conventional design ensures you can also wear them for the rest of the day without feeling out of place. 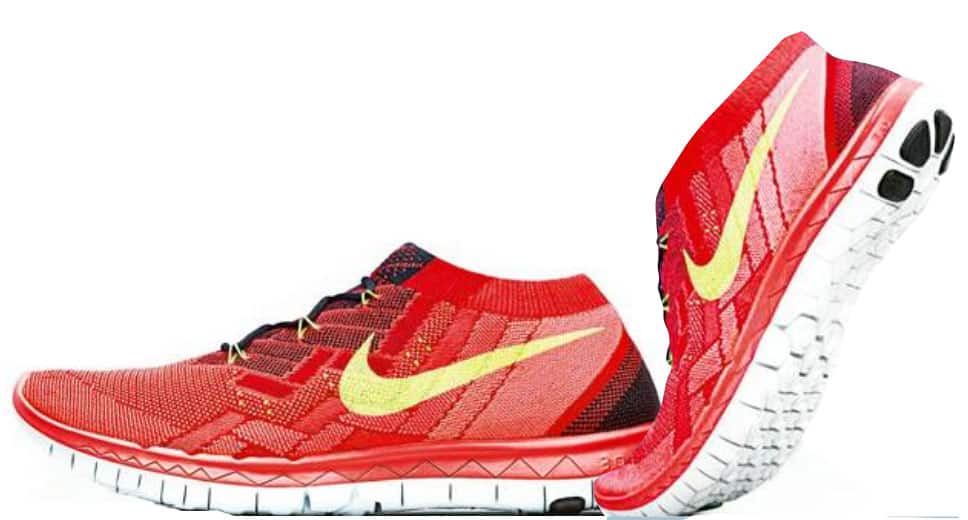 Nike tried to understand the foot contours of a group of male and female athletes, with pressure-measuring insoles taped to their feet. High-speed cameras were used to capture images of the foot in motion to understand the stress points, the foot’s natural landing angle and toe position.

Nike’s Flyknit technology is responsible for the Free collection’s sock-like fit. The trick lies in the computer-assisted knitting method used to assemble the seamless upper shoe. This method, which involves combining strands of stretchable polyester yarn, allows designers to optimize use and reduce wastage. The colour combinations include the attention-grabbing black/university red/bright crimson/volt, the hyper jade/electric green/volt/black, and the subdued black/anthracite/dark grey/white.

The shoe weight, depending on size, is around 178g. It fits so snugly and the ventilation is so good that it’s easy to forget you are wearing a shoe. Even in summer, sweating and heat will not be a problem.

After heavy use and twists at various angles, the Free 3.0 doesn’t exhibit any potential design flaws, nor does any particular part of the upper shoe show any unnatural stretching. The tongue doesn’t stick out, there’s an easy-sitting dual-layer fabric lining in its place. It’ll take some getting used to if you are used to pulling the tongue while tying your laces.

While walking and running, the foot doesn’t move in a perfectly straight line, and even though the body is moving forward, the feet tend to roll slightly when they land on the ground. The outsole has hexagonal grooves, rather than straight lines or intersecting treads. These adapt to the underfoot better. The heel-to-toe switch while running is quicker, and there is no flexing in the middle—something quite noticeable with the straight tread design. The phylite foam midsole is a combination of phylon (60%) and rubber (40%). It is much lighter than the traditional rubber midsoles. The solid rubber inserts in the front and back part of the outsole further improve grip, and unlike most shoes, there is enough filtration to let the runner know the levels of traction.

The Free 3.0 Flyknit’s sock-like ultra lightweight design takes getting used to. The foot sits very close to the ground, which works well for runners. But these cannot be used on uneven or rocky terrain. You can’t run in these on a hard surface for too long—calf soreness is a likely outcome.

They are, however, perfect for daily jogs in the park or on the treadmill.