"storyDirectUrl"
OPEN APP
Home / Mint-lounge / The young and the restless

The young and the restless

The young and the restless

With beads of perspiration running down his face, 18-year-old Harmeet Desai returns from a straight game loss to a higher-ranked Chinese opponent in the team event at the 17th Asian Junior Table Tennis Championships at Thyagaraj Stadium in Delhi. Having beckoned fellow paddler and friend Soumyajit Ghosh, 18, to a lower row in the spectators’ section, he proceeds to slump into a seat. 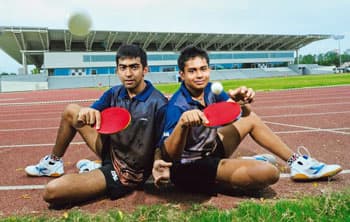 Future perfect: Harmeet Desai (left) wants to represent India in the 2016 Olympics; and Soumyajit Ghosh hopes to become one of the world’s top 50 table tennis players. Photograph by: Priyanka Parashar/Mint

“At best, we can compare the efficacy of our training techniques with those practised in Sweden and other European countries," continues Desai. The two attended a camp in Sweden organized by the International Table Tennis Federation immediately preceding the World Junior Championships held in December. “No one seems to know what goes on in the Chinese training sessions. They are several steps ahead of everyone else," he says in a tone that is almost reverent.

At this juncture Ghosh, who is usually more vocal during his matches—prancing around the table and punching the air after clinching crucial points—dissipates the atmosphere of high praise for the Chinese with a few words of admiration for Jan-Ove Waldner of Sweden. “He is my favourite player of all time, not least because he was one of the few players who stood up to the Chinese domination of the sport."

Desai is a fan of China’s Zhang Jike, the current world champion.

Born a few months apart, Desai and Ghosh— fast friends off the TT table and competitors across it—can be seen preparing to wrest the baton from players like Sharath Kamal, the current national champion. Ghosh won a bronze at the World Junior Table Tennis Championships in the mixed doubles event at Bratislava, Slovakia, in December. Desai notched up his first major international junior pro tour win when he triumphed at the Austrian Open 2011—he trounced Ghosh in the final.

The first time Desai and Ghosh faced each other was at the National Ranking Table Tennis Championships in Vadodara, Gujarat. They were 10 at the time. It was Ghosh who beat Desai then, without expending much energy. “He is good when receiving the serve, and I am always trying to learn to block as well as him," remarks Desai.

Ghosh waxes eloquent about Desai’s serve and fluid backhand—both of which were on display when he came out trumps against a top 10 Chinese Taipei paddler in the deciding rubber in the quarter-finals of the team event in the Asian junior championships, held between 20-24 July. “He played a brilliant game with resilience. It was an important match and he handled the pressure expertly," says Ghosh. He then turns introspective, touching upon a match he veritably gifted to a Taipei player even after winning the first two games. “I have this bad habit of losing matches after having played almost flawlessly to gain the initial advantage. It has cost me a lot of matches." Desai nods in agreement.

Ghosh was nudged into the game by his father at a club in Siliguri, West Bengal, at the age of 5. In Desai’s case, it was his stubbornness and willingness to play that led his father to let him knock around at the TT table they had acquired when he was 6. Within one year, Desai had enrolled at the Petroleum Sports Promotion Board in his home-town of Surat, Gujarat, where he played for a year.

Even before the boys had turned 8, their parents’ support had them on their way to becoming professional paddlers. Ghosh had already pocketed two consecutive under-10 district titles and one at the state level by 2001. That year also witnessed Desai winning the national ranking under-10 tournament.

This year finds them in college—both studying commerce—after the rigours of balancing school education with playing the sport professionally. Ghosh says he just about managed to study for a month for the senior secondary board examinations. Desai has a similar tale. “Although I have been able to balance studies and sport, the class XII examinations gave me a difficult time. I had to finish the entire course in less than 20 days," he says.

Playing more tournaments means more exposure, more chances of playing quality opposition, and opportunities to improve their ranking (Ghosh is currently the No. 24 junior player in the world and Desai is ranked 36).

“The corporates are not interested in table tennis," rues Desai. “But there has been a revival of interest in the sport with the appearance of Sharath Kamal. We are hopeful." He proceeds to talk about many young, talented players who gave up the sport for various reasons. “But we are not going anywhere anytime soon," says Ghosh. “We love this game and have a lot to achieve." This time around, both of them nod, their gaze wandering across the playing tables.

“The 2016 Olympics, that’s where I see myself representing my country. And, hopefully, winning a medal," says Desai. A few months away from turning senior players, the two are aiming high. “It is the top 50 for me," adds Ghosh.

“Man, those Japanese are going to be massacred by the Chinese in the final," Desai chuckles as he prepares to leave. With a swift nod, Ghosh follows Desai to where the rest of the team is seated.