Getting fit with technology

Getting fit with technology

I’m trying to shed about three kilos of weight. This is the excess I picked up through a combination of more-than-moderate snacking after I quit smoking, frequent junk food binges and pints of beer. All this surplus fat got parked around my waist.

I tried to jog in the park but got bored and gave up after a couple of months. Some two years ago I signed up for the neighbourhood gym where I work out on the treadmill and the cross-trainer for about 45 minutes at least four times a week. I also swim occasionally, and try and cycle to the local market over the weekend. And yet I haven’t lost an ounce. In two years! 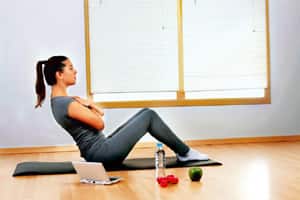 Making headway: Monitor your progress with the help of simple apps.

I visited the WebMD site (www.webmd.com/diet/calc-bmi-plus) to check where I stand on the BMI chart, and it said, “Your body shape indicates take action." I’m not fat; I just need to shed a few kilos around my waist. And since I haven’t despite regular visits to the gym, there’s obviously something wrong with my workout drill, my calorie consumption, or both.

There are many interesting strap-on gadgets you can buy on the Net to monitor your workout, but I’m not interested in them because I am not a serious runner. I have a limited target and I want to try out some simple apps to monitor my progress and also have fun doing it.

Friends abroad recommend the hugely popular RunKeeper, and though it’s essentially an outdoors app, I have downloaded it to check how well it works in the gym. While going through the reviews of health and fitness apps, I found one that I think might suit my requirements—the Nike Training Club. It’s got built-in videos for every exercise, and is good for those who don’t have a trainer. Though it’s geared towards women, there’s no reason why a man can’t use it. Another app I like is iTreadmill, a pedometer with many extra features, including a pacer to set your goals and a calorie counter.

They say gym gets easier once you get into the rhythm of it but personally, I don’t think I can survive a single workout without the music on my phone. I wouldn’t know where to look. Earlier this year NPR (National Public Radio—a network of public radio stations in the US) came out with “The Ultimate Workout Mix" and based on that I compiled my own list (visit www.npr.org and search for the ultimate workout mix). These days, however, I tend to tune in to Absolute Classic Rock radio. It’s the kind of music I can relate to; when you’re bored on the treadmill and the radio plays Paint It Black, you automatically pick up speed.

You feel good when you reach home after a good workout. You open the fridge and wonder what has more calories: a small bottle of beer (335 ml) or a vodka-tonic. I’ve searched the Net a few times but haven’t found the definitive answer. There’s a simple calorie calculator called “Two Foods" (www.twofoods.com) but it works better with items such as mangoes (65 calories in 100g) and peaches (39 calories in 100g) than with alcohol, where the size of the drink and brand matter. According to it, a 330ml can of beer (our small bottle) has 135 calories and a 35ml vodka shot 123 calories (not including the calories in tonic water).

I did a similar comparison at Calorie Counter by FatSecret, an app I just downloaded: 150 calories in a bottle of beer and 85 in a shot of vodka. I’m still confused whether I am better off drinking beer after a good workout, or vodka-tonic.

My friend and columnist Aakar Patel once wrote an article on losing and gaining weight, and I was chatting with him about it when he told me, “The only way to lose weight is to go to bed hungry at night." Perhaps it’s worth a try.