The last time Chris Rock hosted the Oscars, in 2005, he started his monologue by noting that there were four black nominees. This time, he began like this: “Man, I counted at least 15 black people on that montage. I’m here at the Academy Awards, otherwise known as the White People’s Choice Awards. You realize if they nominated hosts, I wouldn’t even get this job."

That was just the start. Rock went on to skewer the Academy’s (and Hollywood’s) lack of diversity. After years of bland monologues full of in-jokes and self-congratulation, it felt vital and dangerous. On why protests over industry whiteness were a recent phenomenon, he pointed out that, in the early decades of cinema, “We had real things to protest; we’re too busy being raped and lynched to care about who won best cinematographer."

It was no small fortune that someone like Rock was hosting this year; it’s difficult to imagine many others being able to plainly state, “Is Hollywood racist? You’re damn right Hollywood is racist." (Also read Chris Rock re-imagines nominated movies with black actors)

The last time a woman won for Best Editing—Thelma Schoonmaker for The Departed—was 10 years ago. But this wasn’t the only reason Margaret Sixel’s win for Mad Max: Fury Road (directed by her husband, George Miller) was refreshing. As she pointed out in her acceptance speech, there’s a sexist assumption in the industry that women can’t cut action, an assumption that the varied careers of Schoonmaker, Dede Allen and Sally Menke make a mockery of.

.@kesharose I'll be thinking of u 2nite. This is not over we'll stand by u until you are free to live a HAPPY life. Everyone deserves that.

It wasn’t just the multiple calls for racial equality in American cinema. Hollywood’s liberal bent was front and centre at this year’s awards. US Vice-president Joe Biden asked people to take a pledge to end the silence surrounding rape. Lady Gaga dedicated her performance of Til It Happens to You to Ke$ha, whose allegations of sexual assault against her producer weren’t enough to get her out of a contract with him. Leonardo DiCaprio, Best Actor winner, talked about climate change. Sam Smith dedicated his win to “LGBT people all around the world." And the Spotlight team called on the Vatican to end sexual abuse by its members.

All roads lead to ‘Mad Max’

They will ride eternal, shiny and with Oscar gold. Congrats to the team from #MadMax: Fury Road. #Oscars pic.twitter.com/FXQaUweLwM

Mad Max: Fury Road emerged as the biggest winner, picking up Production Design, Editing, Costume, Hair and Makeup, Sound Editing and Sound Mixing. This near-sweep of the technical categories notwithstanding, it couldn’t make enough headway to fight off Spotlight for Best Picture or Alejandro Iñárritu for Best Director. Still, this was a dream showing by a film with few pretensions to awards-season artiness, but which was nonetheless art of the most memorable sort. 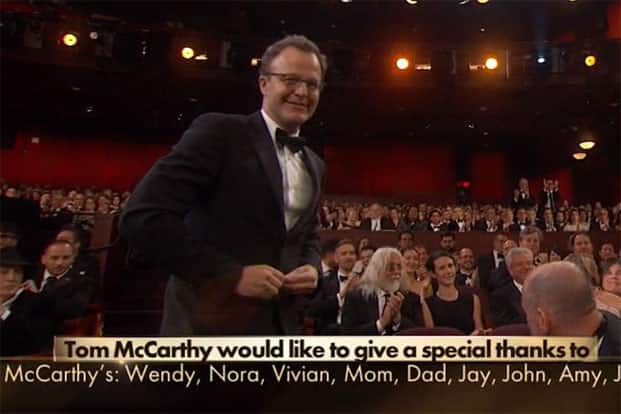 "This is what happens when determined women get together." Bravo, Sharmeen Obaid Chinoy! #Oscars pic.twitter.com/TqqKhY3HXK

Though the whiteness of Hollywood was the evening’s dominant theme, it was interesting to note how much non-American talent made its way onto stage. Australian accents were heard giving thanks every time Fury Road won something. Chile won its first Oscar, for Live Action Short (Gabriel Osorio and Pato Escala’s Bear Story). Pakistan’s Sharmeen Obaid-Chinoy won her second Oscar (for Documentary Short) for A Girl in the River: The Price of Forgiveness. Ireland’s Benjamin Cleary won for Best Action Short, Sweden’s Alicia Vikander for Best Supporting Actress, and Italy’s Ennio Morricone for Best Score. And the Mexican duo of Alejandro Iñárritu and Emmanuel Lubezki repeated their Best Director-Cinematographer sweep of last year.