What did luxury powerhouse Louis Vuitton (LV) see in a (relatively) small Indian leather goods manufacturer? How did the French brand even think of setting up a factory—its first in Asia and one that will likely end up being its largest in the world—in Puducherry of all places? Why did the intensely private company buy a stake in Hidesign, an Indian company that began as a hobby in 1970s Auroville, India’s French hub?

Dilip Kapur, 60, president of Hidesign, the free spirit who began his life as an entrepreneur with Rs25,000 (for a sewing machine, some leather and a worker, all accommodated on a thatched shed on his roof) and who now has a Rs100 crore turnover, can’t answer these questions. 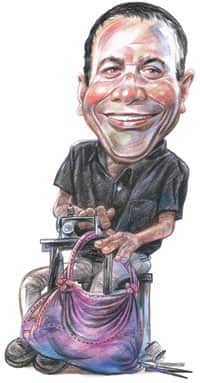 Detail therapy: Hidesign’s straps take as long to design as the rest of the bag, says Kapur. Illustration: Jayachandran / Mint

If you were Louis Vuitton, looking to settle down in India after decades of flirting with the country’s affluent set, and you needed someone you could trust, someone in your area of business, a guaranteed good investment, someone with whom you could converse fluently in your language, Kapur’s would be a name that came to mind.

For one, Kapur is quality conscious. His Hidesign outlets sell nicely crafted, natural leather goods; I know because I’ve been buying their bags since the company opened its first Indian store in 2000 (before that, Kapur was mostly an exporter). Trendier consumers would say the designs are boring/predictable; I think it’s refreshing that a local brand focuses on quality and detailing rather than on imitating the latest global designs.

“You’re a typical customer," Kapur says, over Sauvignon Blanc at Trident’s Tiffin in Mumbai (his knowledge of good wine has grown exponentially, thanks to his connoisseur French partners). “She studies a lot, reads a lot, travels a lot; like you, she’s very natural," he says, pointing to my slightly crumpled cotton shirt and messy hair. I tell him I’ll wear a business suit to our next lunch appointment, and he informs me that he changed quickly from a T-shirt to a Just Cavalli navy shirt—purchased by his German wife Jacqueline—for our meeting.

Incidentally, Kapur swore off suits after he graduated from Phillips Academy, a private school in the US, but recently Jacqueline bought him one from Gianfranco Ferre for all those meetings he now has to attend.

But then, Kapur has always been open to reinvention. In 2000, just as he was beginning to get bored of his rollicking export business, India saved him. “It was one of the best things that happened to me. I think I would have sold the company but then I rediscovered myself and my Indianness." If you had lived abroad for more than a decade, been married to an American and then a German woman, and grown up at the Auroville ashram, where each of your notebooks came inscribed with the maxim “There’s a great beauty in simplicity", you would talk this way too.

At that point, Kapur decided it was time to retail in India and diversify into the hotel business. Eight years later, he has 45 stores in the country (18 more are scheduled to open in the coming year) and two boutique hotels, both in Puducherry.

Kapur and Puducherry have a history. He was born in New Delhi and moved to Auroville when he was nearly six years old after his father sold his shoe business, donated the money to the ashram and “happily became a modern sadhu".

Then there’s the comfort factor. Kapur is someone you can relate to. He teaches current affairs to 14-year-olds at the ashram (all of Kapur’s four children have done stints at this school) and worries about the fact that they don’t care for much beyond sports and music. He has just come from a meeting with his store managers where he spent some time explaining that Hidesign did indeed have an exchange policy and that the customer was not their adversary.

Unlike most Indian leather sweatshops, Hidesign’s 7.5 acre factory in Puducherry could actually make it to the pages of a magazine. Of course, as Kapur points out, an average Hidesign worker still has only 4 sq. m of space against his European counterpart’s 11 sq. m.

Recently, he found himself competing against another international brand, Coach (which also has plans to produce its bags in India), for a job applicant—and winning. “He’s going to be the structural engineer of my bags. He joined us because he would be involved in building an authentic brand rather than just implementing international specifications," Kapur says.

Which brings us to what Kapur gets out of LV’s investment (besides the money to implement his dreams, of course). After all, he already does business in more than 20 countries. For a guy who has always maintained that he was not terribly interested in running a company, he hasn’t done too badly. “When I began, one of my biggest weaknesses and strengths was the fact that I really didn’t care. I didn’t care if the company flopped or if it survived because that was not what was driving me," he says.

It was exactly this attitude, he believes, that allowed him to take risks and do things that he wanted to do rather than things that he thought would work. “It took me many years to realize that doing your own thing is making your own brand."

Now, LV will help him do just that.

For one, he’s already learnt the French phrase de rigueur.“In terms of quality, we are only 30-40% of where we want to be," says Kapur, who will spend the next two years getting the back-end of the business right. In between building two factories and boosting his HR department, he has to figure out a way to improve productivity (a Hidesign bag takes 11 hours to make against a European bag that takes just 3 hours) without compromising on detailing.

His two older sons will do their bit. Vikas, a 29-year-old Stanford graduate and lawyer-who-would-rather-not-be-a-lawyer, will spend six months training at Louis Vuitton in Paris before returning to India and working on the development of Hidesign. Akash, 31, a Rhodes scholar, Harvard graduate and soon-to-be published author, is helping his father build a third hotel, a beach resort, in (where else?) Puducherry. Indian Hotels Co., which runs the Taj group of hotels, will manage this property. Kapur’s younger son Milan now studies at the Kodaikanal International School, and Ayesha, his precocious, talented teenage daughter, (you saw her in the 2005 film Black) still studies at the ashram.

Jacqueline has her own 12,000 sq.ft lifestyle store in Puducherry and is passionate about the horse-riding school she runs. “She keeps the standards of our hotels from becoming pedestrian and helps me with leather garments but the minute she gets involved in the core, we totally disagree," Kapur says. “We have lots of fights when we work together." Sounds like the perfect partnership.

Education: Schooled at Auroville and Phillips Academy, Massachusetts, US. Graduated in international affairs from Princeton University and earned a PhD from University of Denver

Work profile: While doing his PhD, he worked at a leather company. He returned to India in 1977 to live in Auroville and started Hidesign a year later

What’s on his iPod: Pink Martini, Cesare Amora and lots of hip-hop, courtesy his son, Milan. “I used to be crazy about the Grateful Dead but now find them boring."

Food fetish: “I find it really hard to eat a piece of meat, I don’t like the idea of it, the physical chewing, and you know I’m a leather guy." Enjoys seafood. “I also love my mother’s old Punjabi hick desserts — ‘gajar ka halwa’, ‘gud ki sewiyan’, kulfi."