A Ganpati image crafted out of the Telegu script letters is a stunning frame amid the 150 artefacts in the exhibition titled Akshara: Crafting Indian Scripts, currently on at Mumbai’s Chhatrapati Shivaji Maharaj Vastu Sangrahalaya. It is an adorably rotund form of Maharashtra’s most revered Hindu deity, made by the Hyderabad- based handloom weaver Gajam Govardhan. This frame was commissioned for the Mumbai edition of the Akshara project.

Hours of telephonic interaction and instructional exchanges on WhatsApp between Govardhan and Dastkaari Haat Samiti founder Jaya Jaitly (who conceptualised Akshara in 2006) resulted in the figure—Ganpati vandana in Telegu letters. Jaitly says she could not locate a Marathi craftsperson who would have made the idol in the Devanagari script. Jaitly’s optimism stems from Akshara’s journey so far. It started as a loose assembly of craftspersons, mostly school drop-outs with highly evolved traditional craft skills, attending workshops on the innovative ways of expression through the art of lettering. The exhange between calligraphy instructors, a majority from Mumbai and Pune, and craftspersons resulted in friendships and further flowering of ideas. The art took shape and form in different ways for different artistes. The patachitra painter from Odisha Apindra Swain depicted the fortune teller parrot as a new motif, whereas the Srinagar-based Nazir Ahmed Mir zeroed in on newspaper reports to express the idea of peace. The hand block printer from Rajasthan Santosh Kumar Dhanopia took shelter in the Kannada script alphabets for his saris.

The Kutchi dialect came to the rescue of Khatri Mohammad Razak whose Ajrakh print bed covers (which have gained considerable market in and out of Gujarat) are decorated by customary Kutchi greetings. Ideas were borrowed, shared, dissected, tweaked and the resulting products placed for sale at 26 stalls in the museum’s Coomarswamy hall.

“This is the first time we put the artefacts on sale. It was necessary because the museum exposure had to bring in financial gain for the artist. A true crafts bazaar experience had to end with good sales, which manifests in empowerment of the karigar (artisan)," says Jaitly, who has started working towards Akshara’s next stop in China. By combining economic benefit with literacy, livelihoods, calligraphy and local cultures, Akshara has opened new pathways for non-urban craftspeople. It has defined true empowerment in three ways. First, the realisation that formal education in terms of a basic understanding of a script can work wonders in an art. Second, there is a vibrant life beyond English communication and computer skills; native heritage skills are good enough to lead a successful life.

Third, empowerment means a learning of coping strategies in a savvier world. Jaitly says the Dastkaari samiti cannot and should not solve all the logistical problems like hassles over Octroi duty charges or security challenges during transportation, the pricing structure and the damages. 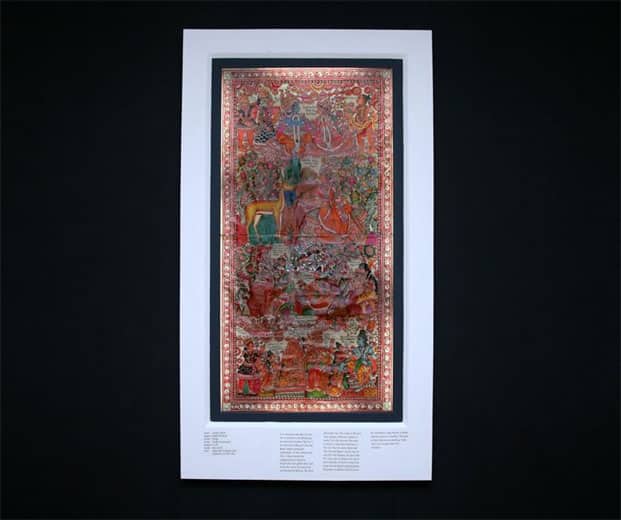 Mumbai provides a cultural context to Akshara, the credit for which goes to the cultural programming company called First Edition Arts (FEA). It has curated complementary material for Akshara like a play in four languages, a music concert, a seminar on language identity and cultural expression, a design workshop, a conversation between a contemporary artist and a traditional artiste.

As FEA director Devina Dutt says, “Akshara matches our interests‎in the arts across genres. It addresses aesthetics and the making of meaning. Some of the exhibits show traces of humour of varying inflections from gentle satire to irony and a deliberate social comment. Akshara is also a unique perspective on how the non urbanised craftsmen live and think and feel."

The subtlety of ideas in exhibits like the Kavad art or Kani sozni embroidery or Sanjhi art lamps is breathtaking. It shows how urban Indians take pride in crafts without appreciating their complexity.