So you know your way around Avenue Montaigne blindfolded and call SoHo your second home. But are you sure you’re getting the best of Paris and New York? Are you certain you aren’t overlooking the quirky, avant garde designer who set up his boutique away from the retail hubs? Or that artisanal cheese-maker, who prefers to work out of a hole in a dreadfully unfashionable wall? 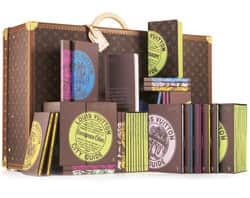 Lest you think that the guides are merely boring lists of expensive boutiques, Pierre Léonforté, editor-in-chief of the guides since 1998, says: “The City Guide is not about luxury shopping. It is a compilation of the very best addresses, at all price points, that we have found in a given city." Also included are hotels, bars, restaurants, cafes, shops, museums, cultural attractions and must-see sights.

So, which addresses make the LV cut in Mumbai? Drop in at one of the four Louis Vuitton stores in India (Emporio mall and The Oberoi in Delhi, UB City mall in Bangalore and Taj Mahal Palace and Tower in Mumbai) for a look-see. The European Cities guide set costs Rs5,800, the individual volumes are Rs1,600.