The art of detritus

What remains after revelry and festivity end? Artist Dhruv Malhotra captures it in his new show

The occasion is Durga Puja—but the celebrations are over. Instead, what we see is the aftermath of the event and the festive paraphernalia being dismantled. Rather than gracing the stage, a series of idols stand in a row just below it and seem to oversee the dissolution of the event: white plastic chairs and a ladder arranged horizontally, ready to be transported.

This surreal image of the aftermath of a function is a recurrent theme in Dhruv Malhotra’s new exhibition, After Party, which continues his preoccupation with nocturnal cityscapes. “Everything is different at night—the light, the absence of people, the silence," says Malhotra. “A lot of these things are what drove me to photograph at night, especially working in the quiet without people. If you are a landscape photographer who wants to shoot cities without too many people, then the night is a good time to shoot it."

From personal portraits to action-packed street scenes, urban photographers have found many ways of narrating stories about cities. Malhotra trains his lens on the urban landscapes that lie just outside our vision. Shot at night over seven years, from 2007-14, After Party, together with Malhotra’s first two exhibitions, Noida Soliloquy and Sleepers, concludes his After Dark trilogy. Together, they offer rare glimpses of how urban spaces change dramatically between day and night, while revealing what the absence of people at night says about our cities.

The seeds for After Party were sown in 2006-07 when Malhotra was chronicling the changing topography of Noida, adjacent to New Delhi, by wandering through its streets, parks and construction sites. His next exhibition, Sleepers, focused on sleeping figures in public spaces across the country. “Noida Soliloquy was looking at this vehement urban development and expansion in the most direct fashion," says Malhotra. “With Sleepers, it became more about our relationship to the environment. With this project, it is becoming abstracted. It is almost forensic in terms of looking at the remains to get to what it was."

This investigative approach is evident in the camera’s careful scrutiny of the temporary architecture that is built and rebuilt for social gatherings. Though no locations are mentioned, After Party comprises marriages, conferences, banquets and religious festivals in cities like Delhi, Jaipur (where Malhotra currently lives), Mumbai and Kolkata. While the photographs refrain from passing any judgement on the opulence of these celebrations, they carry an undercurrent of critique. 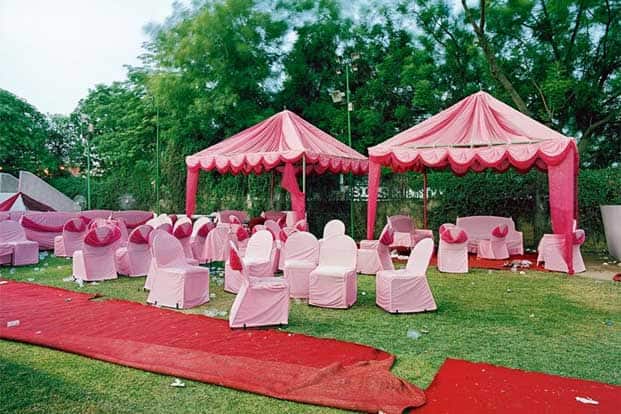 In contrast to the ephemeral nature of these structures, the process of making these photographs is long-drawn and almost meditative. All of the three night-time series have been photographed with a Mamiya RZ67, a medium-format analogue camera, using film and a sturdy tripod. “That gave me the language that I was after to look into the heart of darkness and to see what the darkness is holding inside it," Malhotra adds. “It is a natural process—when you walk into a darkened room, your eyes can’t make anything out. If there is even a tiny fraction of light, then your pupils dilate and they can see."

It is possible to speculate on the numerous clues embedded in the lavish movie-like sets in these photographs: a lone statue encircled by chairs in a garden, a man resting on a table at the entrance to a gate, and a group of people chatting under a palatial facade. The make-believe element in Malhotra’s photographs is not incidental, but a result of his love for fantasy fiction, especially Steven Erikson’s 10-book series Malazan Book Of The Fallen. “I love colour. My colour is very strong, saturated and dynamic. It is almost hyper-real, there is an element of fantasy to the palette because I am a science-fiction buff."

In contrast to the itinerant process of making images by wandering and stumbling upon his subjects and landscapes in Noida Soliloquy, After Party is considerably more premeditated and well thought-out. Yet, in several ways, the exhibition completes the circle started almost eight years ago. Malhotra plans to move away from night photography in his next project. “With Noida, I wanted to look at spaces which are half-seen and easily forgotten," he says. “After Party is about this space that’s been created, to look at and register it before it vanishes. It is in the registration of these spaces that we realize something, otherwise it’s a flickering moment and it’s gone. That space hardly ever leaves a mark."