Caught between neglect and gentrification, Jakarta's old town is an oasis for locals, a place to escape a relentless city

The traffic is so horrid I almost think I am back in Mumbai. But the roads are whole, and there are no auto rickshaws trying to get into non-existent spaces, so that cannot be. No, in fact, I am in Jakarta, the teeming, heaving capital of Indonesia.

As a frequent corporate tourist to this city, I have come to accept that it is charmless. More than any other South-East Asian capital, Jakarta has been ravaged by its rapid economic growth. It is now a petri dish of skyscraping office towers poking their heads through air thick with pollution, malls that are each the size of a mini-city and grotesque traffic jams. So, to be told that there exists another version, a gentler, quainter version of this urban ogre, was to seek it out.

The promise was credible. I had been directed to the Dutch colonial part of town, Old Batavia, or as the Indonesians call it, Kota Tua, literally Old City. I was hopeful because old towns are universally charming, their architecture pleasant and picturesque, and usually sit in an ecosystem that is designed around tourists, which in Jakarta would be rare enough for it to be welcome. There were other reassurances too: In February, Indonesia nominated Kota Tua as its candidate for Unesco’s World Heritage List, picking it over contenders such as the spectacular Raja Ampat Islands in West Papua, and Trowulan, a former capital of the Majapahit Kingdom (1293–1500 AD) in East Java. So, when I arrive in Kota Tua, it is not without a quiver of anticipation. The disappointment is instant. To start with, there is the garbage. I suppose, as an Indian, I have no right to crinkle my nose, but the Ciliwung is inside it and it is foul. I make my way through the crumble of buildings, the centuries heavy on their shoulders, and reach Taman Fatahillah, the main square, which spreads itself out like a large dhurrie in front of the Jakarta History Museum. And yet, as I walked about the square, I couldn’t help getting caught up in its mood. This was rush hour on a weekday evening, and 100m away in any direction was a city choking on itself. But here, in this tiny little area, was a semblance of open space and the possibility of relaxing, unwinding, slowing down. All around me, hijab-clad women held aloft their selfie sticks and smiled into them like they were in some other-worldly landscape; couples and families and children rode gaily painted bicycles, frilly white bonnets on their head; street-side hawkers sold snacks and trinkets, handmade art and printed T-shirts; a medley of mime artistes did their thing, amusing children and posing for “groufies"; and buskers serenaded shy lovers. As the evening deepened, everyone gathered around a band of local boys to cheer their impromptu concert of Bahasa songs. 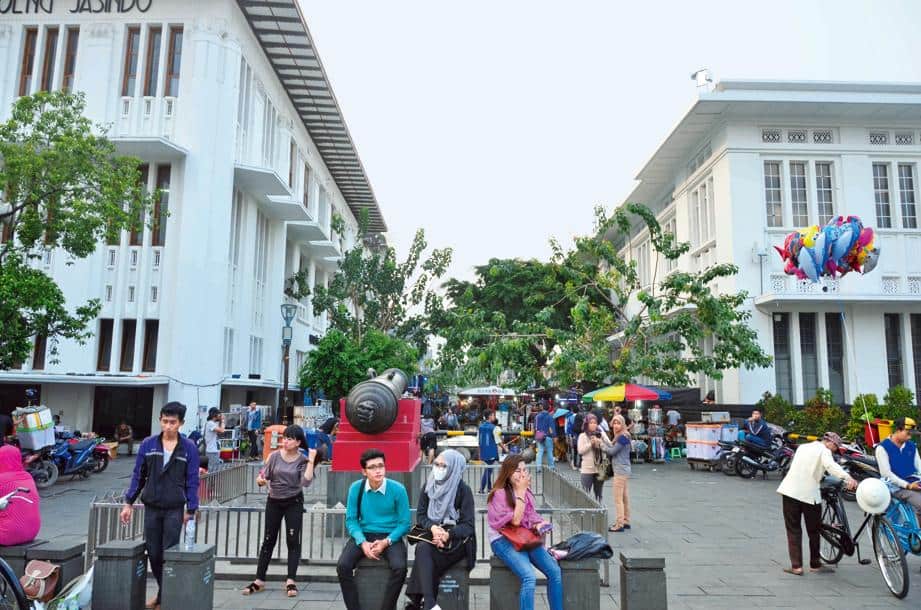 Gentrification, undertaken in the name of cultural conservation, has often led instead to more erasures—of livelihoods, of habitats, of communities—and there is a fear that a “revitalized" Kota Tua will cater to the middle and upper classes, and exclude or marginalize others. “They only want us to sell art to the tourists," grumbled a street hawker, who sells clothes in Kota, to the Jakarta Post, a local paper. Jakarta deputy governor, Basuki Tjahaja, told another local paper, Kompas, “We have to shape Kota Tua as sophisticated and expensive. A five-star hotel will not be exclusive if it sells a cup of coffee for Rp5000 ( ₹ 24). The same metaphor applies to Kota Tua."

One can only wait to see what direction such a project will take, but till then, don’t come here to see what the Dutch left behind. Don’t come for museum tours or a packaged Old Town experience. Instead, come to Old Batavia to see Jakarta unwind, to see it slow down, ride a bike, eat an ice-cream, take a selfie. Come here to see how a relentless city digs back into history to catch its breath.

There are no direct flights between Indian cities and Jakarta. The most convenient option is to connect in Singapore. You can get a visa on arrival for $35 (around ₹ 2,200).

The interiors at Café Batavia transport you to the past century, but through its windows you can look out on to local residents completely owning this once colonial space. The Prohibition Chophouse & Speakeasy Bar (Plaza Senayan Arcadia, Jalan New Delhi, Senayan, Jakarta Selatan) is an unlikely but terrific choice to see the cool side of contemporary Jakarta and drink wicked cocktails. Choose the French 75 if you are in for a long night.