"storyDirectUrl"
OPEN APP
Home / Leisure / Why she is turned on by power, he by beauty

Why she is turned on by power, he by beauty

Why she is turned on by power, he by beauty

I have a game I have been trying out at parties for a decade. I ask women to give it a thought, and then choose the order in which they would be attracted to the following types of men as their partner: a) Good-looking b) Powerful c) Stable. 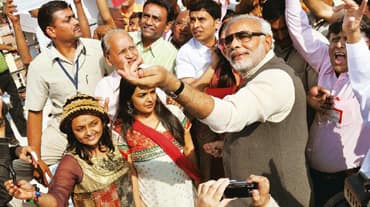 I ask men to choose from the following:

We are uncomfortable with accepting the extent to which our instinct, formed over tens of thousands of years as hunters-gatherers, dominates our intellect. But it is true that our sexual instinct is not entirely in our control, and women are drawn towards the powerful male.

A wealthy man, no matter how ugly—Aristotle Onassis—will bed the most desirable women in the world: Jacqueline Kennedy, Maria Callas. Given that fact, powerful men often practise what is called serial monogamy, monopolizing a beautiful woman for the best years of her beauty and then moving on to the next woman. That’s why rich men often have many divorces—Larry King is on his eighth wife, Johnny Carson had four, Mickey Rooney eight.

Other powerful men have a different model, a stable family life but constant sexual relationships on the side: Tiger Woods, David Beckham and Bill Clinton.

Evolutionary psychologists attribute this behaviour not to sex addiction but the instinct to spread genes. Man has an unlimited number of potential offsprings because of his ability to generate sperm. And so the most important aspect of whether or not he will mate with a woman is not love or even attraction, but opportunity. Most males will accept this if asked, and any number of studies show it to be true.

One study, a few years ago, had a beautiful woman on a college campus approaching strangers to have sex with her. Every single man she approached agreed. When an attractive man did the same with the campus women, not one agreed. Again, the reason for this is thought to be primal, and it is this. A woman will have three or four and a maximum of perhaps a dozen or so children (Mumtaz Mahal was rewarded with the Taj Mahal for producing 14). So, in a species where man is provider, she must be more careful in selecting her mate because she has to ensure he is capable of protecting her limited offspring. This explains the female attraction to power.

Gujarati women find Narendra Modi very attractive sexually and, even more than the man, it is the urban Gujarati woman who has made Modi a heroic figure in that state. An ageing woman does not have appeal in society because man is instinctively trained to see that her utility is low. This is why women hide their age more than men. It is because of her declining fecundity that age is unattractive on a woman though it’s irrelevant in the rich man. This is not to preclude that a man might find a beautiful woman of older age sexually attractive: He will (remember the opportunity rule). But this will be a relationship of casual sex, because man is first drawn to the nubile woman. Exactly how nubile? The male preference for shaved pudenda offers an indication.

The idea that women are drawn to power opens up doors that many men would rather be left shut. The myth in health literature that penis size does not matter is subscribed to primarily by men. Women would actually have been attracted genetically to the large organ before the use of clothing, which is quite recent. This is because a larger organ is more efficient at depositing sperm, thus ensuring fertilization.

We know that organ size matters because it conditions the unusual behaviour of males in the toilet. In the men’s room, when a urinal is open between two standing men, a third man entering will avoid the spot in the middle and head for the fifth urinal so as to keep one open space between him and the next man. This is because he is conscious of his neighbour sizing him up.

Indian men are particularly insecure and toilets here have a wall—often as high as a standing man’s head—between each urinal.

Incidentally, this competition among men for women is a clear indicator that the anti-homosexual sentiment of Christians and Muslims is Old Testament prejudice. Instinctively, all heterosexual men should like homosexuals because they are not a threat. Often we send out sexual signals that we think are effective, but are actually meaningless. The man who colours his hair black does so without understanding that his youth isn’t what women primarily find attractive in him. It is important, however, for a woman to colour her hair, and the defiant woman who doesn’t, finds it difficult to get men to view her in a sexually attractive light.

Despite the male obsession with large motorcycles, and the advertising that suggests that women find them alluring, an expensive car, say a Mercedes-Benz, is much more effective at communicating a man’s quality. Money power being the key here, and not mechanical power. Similarly, the female predilection for handbags is unfathomable to men, though wearing stilettos is a good idea. Women should wear high-heeled shoes. They make a woman physically vulnerable, teetering, and that makes her attractive to a man, because he likes to think of domination. The heels reform her posture forwards, and that also has its appeals.

Nail polish and lipstick are most appealing to men when red, because it indicates health and vitality, and that was the original purpose of cosmetics. Brown, blue and black and such other colours are quite useless in attracting men.

So can we escape our instinct? Yes, but only episodically. It keeps coming back and it’s always lurking in our head if we observe it. Our prejudice is quite marked and women who are both gorgeous and intelligent are remembered for their beauty. A man who is striking-looking and intelligent is noted for his brains, even by women.

It’s banal but true: To improve their odds in the love market, men need to focus on making more money and women on looking more beautiful.