In early modern Europe, explorers dreamed about it as a direct sea route to the fabulous wealth of China. An 18th century story goes that the English ship Octavius sailed eastwards, off the coast of Russia, into its freezing waters; it was discovered a decade later, afloat, with the macabre cargo of the bodies of its entire crew frozen to death. For ages, the Northwest Passage, a sea route through the Arctic Ocean which connects the Atlantic and the Pacific, was the stuff dreams were made of—but it was only crossed for the first time in 1906. 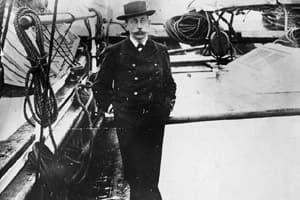 Amundsen’s record of this landmark early journey, Nordvestpassagen, appeared in English as The North West Passage in 1908.

Amundsen had the body and soul of a Viking, and a literary style for which writers of British boys’ school stories would have given their right arms. Reading the book today gives us a sense of a man more charming than any frostbitten polar adventurer should have the right to be. Full of sniffy asides, benign racial paternalism (“My sincerest wish for our friends the Nechilli Eskimo is, that civilisation may never reach them.") and an unflappable good cheer about three winters of death, deprivation and sub-zero temperatures, Amundsen’s storytelling can make his achievement sometimes sound like a boyish quest fantasy. Perhaps all great explorations are a bit of both.

(The text of Volume II of Amundsen’s book, The North West Passage, can be read online athttp://www.archive.org/details/roaldamundsensth02amun) 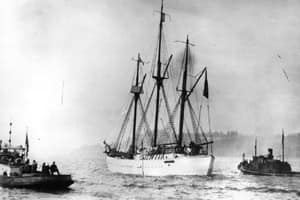 Journeyman: One of Amundsen’s later ships, the Maud , found in the Arctic two years after it was lost. Topical Press Agency/Getty Images

He bolted again immediately, and I was alone. The North West Passage had been accomplished —my dream from childhood. This very moment it was fulfilled. I had a peculiar sensation in my throat; I was somewhat overworked and tired, and I suppose it was weakness on my part, but I could feel tears coming to my eyes. “Vessel in sight!" The words were magical. My home and those dear to me there at once appeared to me as if stretching out their hands—“Vessel in sight!" I dressed myself in no time.

...On the appearance of the unknown vessel we hoisted our Norwegian flag. It glided slowly up under the gaff, every eye watching it. Many pleasant words were whispered to the flag, it seemed as if everybody wanted to caress it. It had become a bit worn and ragged, but it bore its wounds with honour.

“I wonder what he’ll think when he sees it?"

“He’ll think it is a venerable old flag."

“I shouldn’t be surprised if he were an Englishman."

“Oh, yes—he will see we are boys from good old Norway!" 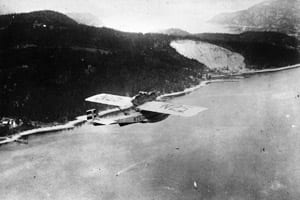 An early flight over the polar regions. Amundsen would eventually lose his life when a similar plane crashed in 1928. Topical Press Agency/Getty Images

Of the bowhead whale, the whalebone alone is used; all the rest goes to the fishes. But then the present average value of the whalebone taken from one whale is 10,000 dollars. Whale hunting is not by any means easy or free from danger. The bowhead whale is very wary, and is scared away by the least noise. As soon as a whale is sighted, the propeller is stopped and sails alone are used. While the whale is still a long way off, a boat is lowered to begin the actual hunt. Oars must not be used; It must be propelled by sails only. The little boat is steered direct to the huge monster, the harpooner standing in the bows ready to throw his harpoon. Shooting is out of the question, as a shot would scare away all the whales for miles around. Tonite is used as an explosive. If the whale is not killed by the first throw, he darts off madly, and ample rope must be given him if the harpooners are to follow him, just as in hunting the bottle-nosed whale between Jan Mayen and the Faroes. If there is ice in the fairway, the hunters must be on the alert. If it becomes necessary to cut the harpoon line, this means an absolute loss of something like L1800. When killed, the whale is towed to the vessel. The head is cut off and taken on board, and the carcass is sent adrift. Then the whalebone is taken out and the head is hove overboard.

…I inquired what this costly material is used for, and I learned that it is chiefly used for the manufacture of corsets. A ladylike figure is an expensive thing but I think that, after my experience as a Polar resident, I would vote in favour of dress reform.