Thanks for Visiting Mint
You seem to have an Ad Blocker on. Please turn it off in order to continue, or whitelist Mint
HOW TO TURN OFF AD BLOCKER
OR
REFRESH IF YOU ALREADY TURNED OFF THE AD BLOCKER
Home >Mint-lounge >Features >The truth behind 5 fad diets

The truth behind 5 fad diets

The truth behind 5 fad diets

In a world full of concave abs, we are constantly bombarded with new miracle diets. Shikha Sharma, doctor and wellness consultant, considers diets a great way to start a healthy routine. She says, “They help start a behavioural change, make you disciplined and focused, but it’s only a method to start that change and not a way of life." Be it Jennifer Aniston’s baby food diet or Beyoncé Knowles’ cayenne pepper and water programme, diets are getting crazier by the minute. Our panel of experts—Dr Sharma, Sheela Krishnaswamy, managing partner and founder, Nutrition Information, Counselling and Health Education (NICHE), and Ishi Khosla, clinical nutritionist and director, Whole Foods India—spill the beans on five popular eating plans.

Listen to the Lounge podcast.

The Facebook for dieters, SparkPeople is free and comes loaded with diet and exercise information. On joining, you are asked your weight and height to determine the correct body mass index (BMI) and only healthy goals are allowed. Calorie recommendations are set on whether you choose moderate or aggressive weight loss. Progress is recorded via SparkPoints that are rewarded according to activities done to track your health goals. You can eat carbohydrates such as rye dinner rolls and reduced calorie bread. Dairy in the form of cottage and cheddar cheese is also allowed. A lot of importance is given to exercise, with various suggestions and a large directory of recipes you can select from on the website www.sparkpeople.com

The recipes and exercise tips are free. Krishnaswamy says, “It seems like a sensible calorie distribution, also encourages physical activity and water intake." Dr Sharma says it works positively to sensitize people towards healthy eating and to “learn so much more". 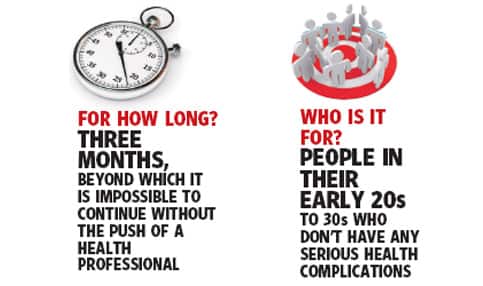 Dr Sharma considers it a little too safe. She explains, “I tweak diets according to an individual’s personal constitution, sometimes with a mix of Western science and ayurveda." Diets that are too generalized can be a bit too safe and, therefore, sometimes ineffective. Dr Sharma suggests that SparkPeople should be viewed more as an information portal for health than as a diet.

Khosla warns that this diet isn’t good for people with insulin imbalance. The recipes must be read carefully by diabetics to check for hidden sources of sugar. Teenagers who have a tendency to go to extremes mustn’t be allowed on this diet.

According to this diet, all forms of sugar are toxic since it produces insulin that results in weight gain. The original book, published in 1995, has since attained a large number of followers. It particularly discourages refined sugars in food and also includes the removal of high glycemic food such as white breads and pasta, along with hidden sugars such as corn syrup, honey, dextrose, fructose and molasses, among others. Even certain fruits and vegetables such as potatoes, corn and carrots are banned. Along with weight loss, the diet also claims to lower cholesterol, increase energy and help treat diabetes. Like the Zone, this programme follows a set ratio but uses 30% protein, 30% carbohydrates and 40% fat. Only red wine is allowed in alcohol. 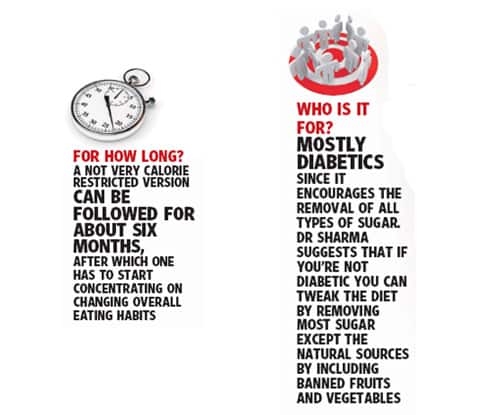 Most nutritionists are in agreement about the harmful effects of sugar on the body. Says Dr Sharma, “There’s absolutely no problem in giving up sugar forever; it causes inflammation, hormonal imbalances, acidity and obesity." Krishnaswamy likes it because it encourages the removal of refined sugars without barring any particular food group. She adds, “Excess sugar intake can lead to an increase in triglycerides and dental decay, it also leads to fluctuation in insulin levels which, in turn, increases cravings for more food."

Khosla isn’t a big fan of the diet because it also eliminates some valuable minerals and nutrients, isn’t suitable for vegetarians and restricts some fruits and vegetables which are essentially healthy. The complete removal of sugar makes the diet regimental, with no room for treats. While it is fairly effective for weight loss, the results could be on the basis of severely calorie-restricted meals, a maximum of 1,200 calories per day.

Says Khosla: “The plan’s emphasis on monitoring precise proportions of fats, proteins and carbohydrates is inappropriate since it results in eating disorders." The diet is also extremely low in carbohydrates; therefore, there is a risk of ketosis, and its related perils.

A huge craze in Japan, this diet, as the name suggests, is simply about eating bananas in the morning. You can eat as many bananas as you want for breakfast but not so many that you get a tight, full feeling in the stomach. Eat the fruit with room temperature water, which is the beverage of choice in this diet. You can eat whatever you like for lunch, dinner and snacks, as long as you don’t eat after 8pm. Restrictions include no ice cream, dairy products, alcohol or dessert after dinner, although one sweet snack is allowed mid-afternoon. Another important aspect of the plan is the lack of emphasis on exercise. You can exercise if you want but only do the least strenuous workouts. “Bananas are best had in the morning because they energize you," says Dr Sharma. “According to ayurveda, bananas are loaded with kapha, which is a cold and heavy energy; if eaten at dinner, they can mess up your metabolism." Krishnaswamy agrees about the myriad advantages of the fruit and believes that the discouragement of ice cream, alcohol and dessert after dinner could be the real reason for weight loss.

Khosla calls this diet nutritionally imbalanced and considers it bad since it discourages exercise. Krishnaswamy says, “There’s no definitive diet plan after breakfast, a free reign to eat what you want can be mistaken as permission to eat junk food. No substitute has been suggested after disallowing dairy." Some people tend to put on weight with bananas, which can make the diet counterproductive.

Not all dieticians recommend this diet but they do give a thumbs up to the addition of bananas at breakfast.

Peter D’Ádamo, the author of Eat Right 4 Your Type, suggests that a chemical reaction occurs between your blood and the food you eat, caused by a factor called lectins. These are proteins found in food that have agglutinating properties that affect blood. According to his theory, if food with incompatible lectins is consumed, they can target a body part and begin to agglutinate blood cells in that area. The blood type diet claims to be in rhythm with your genetic pattern, with food groups divided into three categories—highly beneficial, food allowed and food not allowed—according to your blood group. Common vegetables and fruits such as spinach and apples are allowed for all types. 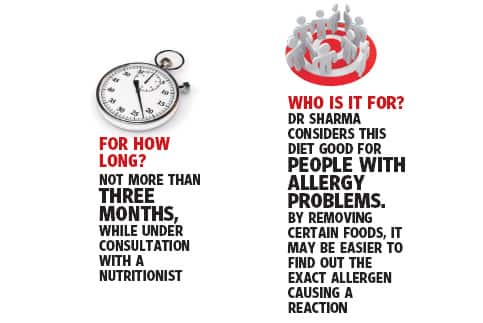 While most dieticians are sceptical about the concept, Dr Sharma says the upside to this diet is that it forces one to think about one’s body and what works for it. “It matches with some ayurvedic theories. Somewhere, this diet pattern has potential but it is premature to be effective."

The main risk in this diet is of deficiencies. Says Khosla: “For example, the diet plan for O and A blood types limits dairy products. Consequently, the diet becomes low in calcium and other nutrients." It’s also confusing for most people because lists of restricted and allowed foods make it unsustainable. Also, it’s not focused on weight loss.

Because there’s an obvious risk of nutritional deficiency, this diet should be followed under the supervision of a nutritionist.

A softer version of Atkins, the Zone diet was devised by US-based biochemist Barry Sears, and is a low-carbohydrate, high-protein diet. It advocates that food should be treated like prescription medicine—the right combination helps you enter “the zone". So, 40% of your daily calories must come from carbohydrates, 30% from fat and 30% from protein. It also encourages you to eat unlimited amounts of fruits and vegetables. According to Sears, such a diet promotes optimum fat-burning conditions. Says Khosla, “The amount of food eaten is an important factor in this diet and clients are encouraged to monitor their food portions." The diet consists of three meals and two snacks which are scheduled for late afternoon and late evening. Another key feature of the diet, introduced in his later books, is an intake of a particular ratio of Omega-3 and Omega-6 fatty acids, thereby popularizing the intake of fish oil supplements. Dr Sharma considers the Zone more nutritionally balanced than other diets, while Krishnaswamy appreciates the importance given to omega fatty acids. It also causes less fatigue than Atkins since it allows some amount of carbohydrate intake.

Compared with other diets such as Atkins and GM, this results in slower weight loss. “This isn’t completely a bad thing since slower weight loss is also more sustainable over time," says Dr Sharma. Since there many calculations involved, this diet will only suit those who are committed. It’s tough to follow for those who don’t want to spend too much time thinking about their choices in food, making it time-consuming and expensive. Krishnaswamy warns about the perils of all low-carbohydrate diets—they can cause renal failure and constipation.

Dieticians warn about the temptation of swinging between Atkins and Zone while following this diet. “People start by following this diet correctly but have the tendency to completely cut out carbs for short periods in between which spoils the balance that is so important," says Dr Sharma. Diabetics must avoid this diet since they must weigh and measure according to their own personal blood sugar.