This collection of essays by Nilanjana Roy documents the birth of a habit, of how Indian English writing turned from curiosity to comfort

That a Bengali should write a book titled The Girl Who Ate Books seems like the most natural thing to do. Bengalis, after all, eat everything. Khai, the all-weather verb for eating, unites such disparate things that the distinctions between what constitutes food and what cannot be eaten seem not to exist at all. Bengalis “eat kisses" (chumu khelam), and one could, just on the basis of that, categorize their lives as overwhelmingly erotic had they also not eaten the proverbial opposite of the kiss—the kick. Laathi khelam—the Bangla equivalent of “I was kicked" is “I ate a kick"; lathi jhaata khelam, meaning “kicked and beaten with a broom", being a modified version of the same; maar khelam, “I ate up the beating"; thappor khelam, “I ate a slap"; chimti khelam, “I ate a pinch"; pyaak khelam, “I was teased". But Bengalis also eat good things, like lyadh, their “leisure". The most outrageous thing in the Bengali’s diet would certainly be “False"—“False khelam", “I was duped" or “I was cheated". Giving it close competition is “Case khelam", “I was fooled" or “I was booked for a mistake". 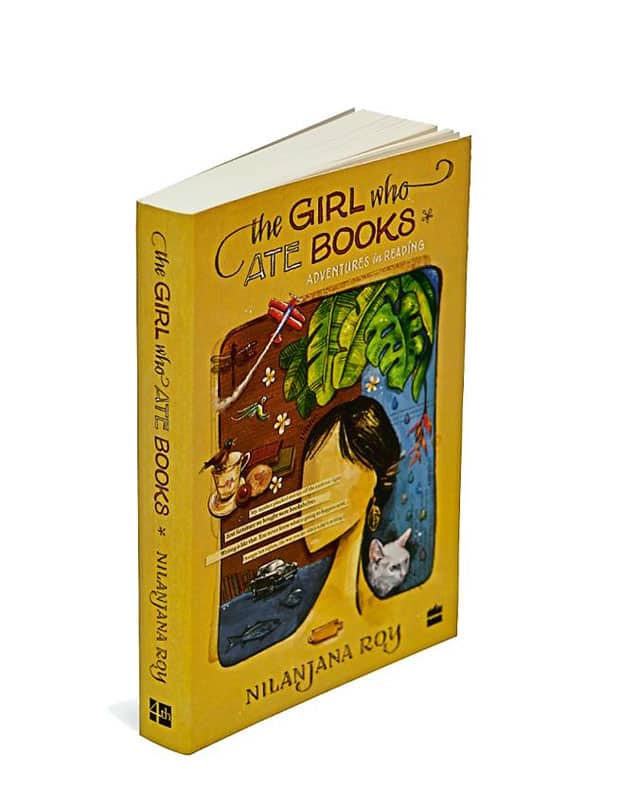 The difference between eating food and eating books, then, must be only in the directions of digestion: food moves southward through the gullet; the books northwards to the head. I found myself using these words as a joke in an examination hall conversation with a student in Darjeeling: He would put his “cheating material", tiny pieces of paper with helpful notes in them, inside his mouth when the invigilator walked past.

Nilanjana Roy, who has edited an anthology of food writing, A Matter Of Taste: The Penguin Book Of Indian Writing On Food, talks about this difference in the last line of her introduction to this collection of essays, written over a period of nearly two decades: “... despite the title of this book, I can guarantee from personal experience that reading books will cause less heartburn and acidity than eating them. If you remain undeterred, choose books with crisp pages and matt rather than glossy covers, and remember that hardbacks (and poetry) are better for your health than pulp fiction". Better advice on nutrition is hard to find.

Eating books turns ordinary life inside out: To begin with, the library turns into a kitchen and bookshelves into utensils. “The Holy Grail of bookshelves, the ultimate shrine, the sanctum sanctorum, the point where every booklover and hoarder’s pilgrimage ends: an empty shelf." This is from the opening paragraph of this book, and it’s a treat to see how “an empty shelf" has the ring of an “empty plate". Reading the Prologue, I had a sense of Roy writing about the inheritance of bibliomania helping me to understand my marriage—how the growth of bookshelves, acquiring them and repairing their tired feet and spines, arranging books like the ingredients of a salad, had annotated marriages like mine.

The book is divided into seven sections—a seven-course meal if you will—on poets and writers at work (a part of it is titled, unsurprisingly, the “Coffee Break" series), on books and book-lovers, plagiarism and what Roy calls “Expression", the last section which contains the quite delightful essay titled “Empty Chairs" (to continue with the metaphor of the “empty shelf"—from shelf to chair, their empty status, tracing the trajectory from reading to writing, almost mimicking Roy’s career).

My favourite, however, is the first section, titled “Early Days", which is inaugurated by the essay that gives the book its title. It’s a beautiful essay about her early arrival into the technology of reading and has fantastic asides about the invisibility of the woman reader in the public space. I must quote this bit/e from it: “Tentatively, I licked the page. I would discover later, through a process of trial and error, that Bengali books seldom tasted good, that paperbacks were dry and crumbly, and that exercise books were watery and disappointing. ... Close up, the paper smelled a little like cookies, or like the waxed paper frill around loaves of plain cake. I let my teeth slide over the edges, stopping when Romen, the chef, came in and rummaged through the cutlery in the sideboard."

Also delicious are the essays on poets and poetry that are bound to remind the reader of Mark Strand’s famous lines—“Ink runs from the corners of my mouth .../I have been eating poetry."

This collection of essays documents the birth of a habit, of how the thing we casually call Indian English literature turned from curiosity to comfort—this is literary history told as observer and participant, and it is the latter that will make this book stand out among the many that I imagine being written many years later, studies of a literature coming into its own, seemingly gaining in confidence but not quite, a literature of proud broken bones and minor fractures. This is insider history narrated with critical affection, studies of writers at work and at lunch (how can “eating" be kept away from reading and writing in a book such as this one, after all?), at home or in the world as studio.

The metaphor of eating in relation to literature must not strike one as odd any more, and Roy’s long years as an observer and critic of our culture would, quite obviously, stand as part of the backstory behind the title. Cakes shaped like books and libraries are now fiercely common—last year, a friend, who goes by the pseudonym “James Joyce" on Facebook, received a birthday cake resembling the first edition of Ulysses. Struck by its beauty, I was left wondering whether this cake would be as difficult to consume as Joyce’s novel. Cafés offer popular novels as “free" accompaniments with a latte and cappuccino, and I sometimes look at these coffee drinkers and wonder whether eating books might also cause indigestion. If yes, what is the cure? Is it possible that Desh, Bengal’s most reputed literary magazine, had this problem in mind at least partially when its marketing department began gluing sachets of antacid on its cover page as a free gift to subscribers.

Eating often leads to indigestion. “My conscience was troubling me, and so was my stomach, though this would hardly be the last time I would find the printed word difficult to digest," writes Roy.

We await a sequel to The Girl Who Ate Books.

Sumana Roy is a writer and critic based in Siliguri, a small town in sub-Himalayan Bengal.