A walk through the ruins of Tughlaqabad Fort

A walk through the ruins of Tughlaqabad Fort

Early on a bright and hot, sunny Friday morning a couple of weeks ago, Sohail Hashmi—writer, film-maker and conservationist—led a heritage walk through the ruins of Tughlaqabad Fort, situated on the southern outskirts of the Capital. Ten-odd artists—from outside India and from other Indian cities, all of whom are in town for a summer residency organized by the Religare Arts I gallery—followed Hashmi. 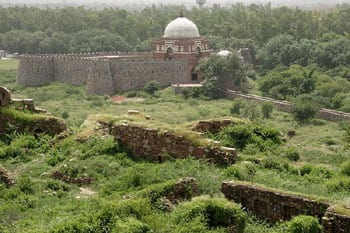 Mausoleum of Ghiyas-ud-din Tughlaq, founder of the Tughlaq dynasty of the Delhi Sultanate, in Tughlaqabad, Delhi. David Haberlah

The first stop was the Adilabad Fort which is part of the complex and was built by the heir-apparent and crown prince Muhammad bin Tughlaq for himself. Muhammad, of course, is infamous in history for his many purported follies, including shifting the entire population of Delhi to Daulatabad in the Deccan and then back again to Delhi. This was followed by a stop at Tughlaqabad Fort, which lies across the main road from Adilabad and probably lay across a massive lake when it was constructed.

The walk was rounded off with the third and final halt at Ghiyas-ud-din’s small but elegant mausoleum.

Hashmi later spoke with Lounge about heritage preservation and related concerns. Edited excerpts from the conversation:

What are your views on the conservation efforts at Tughlaqabad Fort?

The Tughlaqabad and Adilabad forts are under the purview of the Archaeological Survey of India (ASI). ASI didn’t have any money until (a) few years ago and their efforts at preservation were limited to installing a signboard proclaiming that the fort is a protected monument. Until about seven years ago, there was just one guard to protect the Tughlaqabad Fort and one for the mausoleum. Large parts of the fort were taken over by people living in it; some parts are still occupied. But a lot of restoration work has been done over the last four-five years. Unless repair work is done on all the four sides, the fort will be vulnerable to encroachers.

Discount the average citizen completely. As far as heritage conservation goes, there is Intach (Indian National Trust For Art and Cultural Heritage) and the Aga Khan Foundation, which are both working with ASI. And now, there are groups which have started heritage walks at the fort for people—Intach, the India Habitat Centre, college departments and some individuals like me.

Usually when people start visiting a site, the ASI tends to wake up. I recall this episode where restoration work was going on at a step-well that had recently been discovered inside Tughlaqabad Fort. I happened to be there and saw labourers breaking large stones that had obviously fallen into the well and had to (be) put back up in their original position. Since they had no equipment to haul them, they were breaking the stones into smaller sizes. Some of them were red sandstone blocks with Quranic inscriptions on them! I had to ring up people and media folks to put a stop to it.

The local populace has been using the Tughlaqabad Fort as grazing grounds for their cattle for the last 700 years. To stop this practice calls for political will. Ultimately, the people of the city have to develop a sense of ownership.

Any lessons that present-day city planners can take from Tughlaqabad?

To the north of the fort was a huge lake and at the time, Ghiyas-ud-din’s mausoleum was actually situated on an island. Now, of course, the way we have cut up the city, the lake is gone. The main stream that fed the lake still flows, but it has Mehrauli’s sewage flowing in it. All over the city we have ignored the natural slope of the land from the Aravali Hills to the Yamuna river. All the drains of Delhi used to be tributaries of the Yamuna. The sewage flowing into the drains should be trapped and treated, and all the streams of Delhi should be revived. It will clear up the stink that the open drains carry. Instead we are covering them up with concrete, and sewage will continue to flow underneath and pollute the Yamuna. There is a massive water treatment plant coming up on the banks of the river, but that won’t clean up the city. What we need is small treatment plants along the course of the drains.

Sohail Hashmi conducted the heritage walk, Tughlaqabad: 2 Forts and a Mausoleum, on 9 July as part of the ongoing The WhyNot Place residency organized by the Religare Arts I gallery. For details, log on to www.religarearts.com