Shilpa Gupta is not an easy artist to navigate. Her works, which span the gamut of media, from videos, to photographs, installations to drawings, demand viewer attention and participation. It is not easy to coast through a Gupta exhibit, casting a mere glance or two before carrying onto another work. With BlindStars StarsBlind, her current solo at Bodhi Mumbai, Gupta has taken this to varying lengths. Here, the viewer is more than a passive observer; we listen, participate, and in one instance, even create the work of art. Her installations In an untitled video installation, viewers become the unwitting creators of motion censored art. Falling objects, mere shadows against a white screen, chase shadows of the viewer; we walk in one direction, and the objects, sometimes vaguely recognizable as toy dolls and broken shards, follow us around. Eventually as more viewers crowd into the room, our shadow selves are buried under a mass of objects. The objects we chase, Gupta seems to say, end up chasing us, burying us in a garbage heap of useless debris.

In another, three security guard caps hang suspended in mid air, festooned in a curtain of whistles so often seen hanging around the necks of building gatemen. Without human bodies to lend them gravitas however, they hang like decorative ornaments, colourful but hollow emblems of the people employed to protect us. 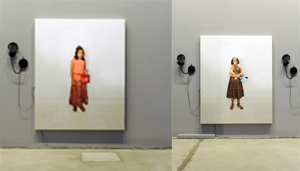 Gupta is adept at juggling several notions at once — the war on terror, labour, security, territory, militarization — she weaves them through works that though lacking in commercial value, are unsettlingly incisive: A yo-yoing microphone oscillates in broadcasting speeches by Muhammad Ali Jinnah and Jawaharlal Nehru, a string of fairy lights declares: “Everyday I wake up to find the world change while I sleep", a photographic series of little girls is accompanied by audio interviews of them explaining what they want to be when they grow up.

The works are spread out across two locations, Bodhi Art, and Bodhi Space, with 20 works separated into two capsule collections. Most are not likely to make it to the second location, which curiously doesn’t really matter. Even with just a few works, and half a show, Gupta is able to convey her intent clearly, making the effort of being an active observer well worth the visit.