PV Viswanath, professor | The unity of all existence

PV Viswanath, professor | The unity of all existence

PV Viswanath, a professor of finance at the Lubin School of Business, Pace University, New York, grew up in Mumbai and migrated to the US in 1975. He visits Mumbai every summer to catch up with friends and family. But last winter, even as he went about his routine in New York, he got involved with Mumbai’s terror attack. Viswanath, or Meylekh as he is known among his Jewish friends, acted as an interpreter in the negotiations between Imran Babar, the terrorist who held five hostages at the Jewish centre of Nariman House, and Rabbi Levi Shemtov, a Chabad emissary in Washington. Viswanath told Lounge about life after the 12-hour negotiations. Edited excerpts: I visit Bombay every year. When I come to Bombay, I try to go to Chabad House at least once. I met with him several summers in this way. Then, in 2007, I came in March with my daughter and spent a Sabbath in south Bombay. I ate Sabbath meals at Chabad House and got to know his family as well.

Can you narrate the sequence of events that night?

On the Wednesday night before Thanksgiving, I was in my office in New York, preparing notes for a finance class I was set to teach the next week. I got a call from my nephew, Naftali Ejdelman, who told me that Chabad was trying to find Indian language speakers to help them deal with the terrorist crisis under way in Bombay at that time.

I contacted them. It transpired that Levi Shemtov, a Chabad rabbi, had managed to contact Imran, one of the terrorists at Chabad House who was in possession of the cellphone of Holtzberg, the Chabad emissary in Mumbai. Over the next 12 hours or so, I acted as an interpreter while Shemtov spoke to Imran. The main demand Imran had was to be put in touch with somebody in the Indian government. Unfortunately, we had difficulties finding such a person, and even when we did locate an Indian official willing to speak to the terrorists, technical reasons made actual conversation between him and Imran impossible. I tried to be only an interpreter and, hence, as dispassionate as possible. There was no time to think of personal feelings.

How do you look back at that night now?

I didn’t feel hatred — just sorrow for the loss of the lives of Holtzberg and his wife, whose mission was compassion and helping others. At the same time, many other people died in the terrorist attack as well — not one of them deserved to die in that way. I felt, and still feel, a kinship with each one of them as a fellow Bombayite.

You visited the place in March.

It was strange standing outside the partially destroyed building, a building that was full of warmth and helpfulness and charity.

The title story of Jhumpa Lahiri’s ‘Interpreter of Maladies’ is about a man who translates people’s ailments to a doctor who doesn’t speak their language. It’s a forced parallel, but what is it like understanding what someone is demanding of you and what is the role of language in all this?

The reason the protagonist in the Interpreter of Maladies is able to do a good job is that he not only speaks Gujarati, but he comes from a Gujarati-speaking background; he understands the culture of Gujaratis.

I think I was able to do a reasonably good job of interpretation because I am familiar with the culture of India, Pakistan as well as that of the Ashkenazic Jews (I speak Yiddish as well, though this language was not used that night) and also with the culture of modern America. And, of course, I speak Urdu/Hindi and English. Still, some of the terms Imran used were not immediately accessible to me (though I don’t believe this at all affected my ability to understand him) and I perhaps used more circumlocutions in my translations from English to Urdu than a born Urdu speaker would have used.

Nevertheless, I was able to speak a language that Imran would have felt at home with; my framing of the sentences should not have seemed foreign to him. Of course, whether this made any impact on him or not is not possible to say. However, judging from the unsettled nature of some of the gunmen in their conversations with their handlers, it’s possible that they were more impressionable than hardened criminals might have been (brainwashed though they seemed to have been). 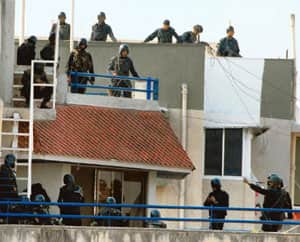 In the Jewish daily ‘Forward’ you’ve written that you were spiritually recharged during the Thanksgiving dinner the next day. Why?

The events were definitely tragic, but it is not often that one feels a connection to something larger in the universe. Each person performs a certain role in the world, and my role included interpreting from English to Urdu. It was extremely unfortunate and tragic that our efforts did not succeed in preventing the death of Holtzberg, but I was given the opportunity to play a part in a larger, spiritual context. Vedanta teaches that there is only Brahman and that our feelings of independent existence are misplaced. Jewish tradition teaches the oneness of God. My participation in these brought me closer to the understanding of the unity of all beings.

How else did it affect you?

Every event has to have an impact on a thinking person’s life. My feelings about the importance of doing good, contributing to the general well-being of people, helping people in need, have become stronger.

Have you used your skills as an interpreter since?