It was long overdue. Since 2001, the menu of Masala Art, the contemporary Indian cuisine restaurant at Taj Palace, had not been upgraded. In keeping with the concept of healthy and pre-plated Indian food in vogue among select chefs these days, Masala Art’s menu gets an overhaul. We got a preview before the menu was officially launched.

The new addition is the option of dining at the open kitchen counter where you can have a degustation menu. This is a great idea as it allows you to try many dishes rather than sticking to a few. There are three options here: all-vegetarian, all-meat and all-seafood three-course meals. In each, you can choose from about 14 items, with a soup, entrées, the main course and a dessert. The degustation menu is available only if you dine at the kitchen counter. 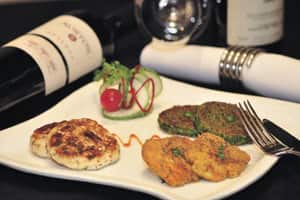 These appetizers were a refreshing change from the usual tandoori aloo, paneer tikka and hare kebabs vegetarians have to suffer meal after meal. The curd in the Tikki was tangy, with a hint of lemon, and the boiled peanuts added crunch. The yam and lentil patty was subtly flavoured and a great substitute for starters made with potatoes.

In the main course too, the vegetarian dishes stood out. If there is one recipe we would love to get our hands on, it is Chilgoza aur Phalli ki Sabzi. One rarely gets to taste innovative dishes with green beans. This dish, with celery, pine nuts and green beans tossed together with just a hint of garlic, was simple, but layered in flavour. Among appetizers, the lightly grilled John Dory fish in mustard sauce, a speciality at the restaurant, was soft, succulent and delicious.

If you have a sweet tooth and like coconut, don’t miss the Coco Gulla, which is a mishmash of rasmalai and rasgulla (sweetmeats). The cottage cheese dumpling is drowned in sweetened coconut milk and topped with fresh coconut shavings. A special mention for the Khubani Badam ka Halwa, which thankfully was not artificially sweetened and retained the slightly sour taste of the khubani (dried apricot).

Don’t miss the restaurant’s signature sugar-cane juice. It is not a new addition to the menu, but is a refreshing change from the usual nimboo pani or aerated drinks, and makes for a great accompaniment to both vegetarian and non-vegetarian dishes.

Perhaps sitting at an open kitchen counter can be exciting and fun for cuisines which lend themselves to interactive cooking, but we did not see the logic of an open cooking counter in an Indian cuisine restaurant. We couldn’t really see what the chef was doing as the glass divider separating the counter from the cooking area is opaque and too high. Secondly, most of the ingredients are pre-prepared, so all one can really do is ask the chef to lower or increase the spice or oil content. The chef assured us that one could request a special dish to be prepared in a way that one likes, but really, how many people would want to do that?

One dish we were looking forward to was the Mathania Mirch ka Murg, made with fiery chillies sourced from Rajasthan. We couldn’t taste anything special in it—the chillies were neither pungent nor flavourful. Boneless pieces of chicken were drenched in a very ordinary red gravy.

Lounge always pays for the food we review, except when we are invited for a preview, as in this case, when the menu has not been officially launched and the prices not finalized. Exclusive of taxes, the all-vegetarian meal from the degustation menu costs Rs1,500, the all-meat meal costs Rs1,900 and the all-seafood, Rs2,400.