Home >opinion >The rewards of a Montessori task

The rewards of a Montessori task

The rediscovery of a lost 'pulao', a bloodthirsty God and a 44-year-old hit song

This is the task our daughter’s Montessori school has given us, the wife and I. The children are being introduced to India’s states, and the school has said parents must present these provincial profiles.

Oh, so you think nothing could be easier, especially because we have Goa? You try explaining the concept of a state to a kindergarten’s formidable inhabitants.

“India is in Bengaluru, right appa?" the five-year-old asks.

So, now I have to explain that Goa is my home state, that it is in India but not in Bengaluru, which is the capital of Karnataka, which is where we live.

“Karnataka? What’s that?" she asks.

I stare at her.

“I did not. Anyway, Bengaluru is the capital of Karnataka…"

You understand? To this child and her friends, we have to explain culture and traditions. To make it worse, word starts trickling in of other—triumphant—presentations. On the school’s WhatsApp group, we watch nervously as the first mother off the blocks sets an extraordinarily high bar by roping in five others, dressing them in traditional Kerala saris and choreographing a Malayali dance.

“I am not doing that," the wife declares.

The children love it, and gradually we watch our daughter’s horizons expand as she comes home talking of the Taj Mahal (Uttar Pradesh), brandishes a kite (Gujarat), carries home a kollam design (Tamil Nadu) and various edible goodies from Punjab, Odisha and god knows where.

As our day nears, our tension grows. These parents are younger than us by a generation or more and clearly more enthusiastic and creative.

“Please send your children in swimsuits for the Goa presentation tomorrow," the wife nervously jokes on WhatsApp.

“Are they supposed to wear swimwear inside their regular clothing or just the swimwear?" a mother asks.

I clutch my forehead. As if we didn’t have enough problems. After hasty clarifications are issued, we work late into the night, trying to come up with a half-decent presentation and not embarrass ourselves.

We rack our brains and research my origins. I find several windows of recollection forced open, especially—and inevitably—those around food. Of course, this Goa presentation will mention beaches—after all, most of these children have probably been there on holiday—but as I recall my history, I am reminded of how strongly the past has shaped what I eat.

On one of our charts, showcasing Goa’s diverse religious heritage—the Safa mosque, the Our Lady of the Immaculate Conception church, the Mangeshi temple, all with origins in the 16th century—I stick on an image of Vetal, our family deity, or kul devata. Now, Vetal is a deity of tribal origin, subsumed into the Hindu pantheon. In modern times, many priests drape him with a lungi, but he is traditionally naked, a dagger in hand, a garland of human heads dangling across his chest, wine or blood dripping from his impressive canines. In Pernem taluka, where my home village of Halarn sits, animal sacrifices to Vetal were once common (I don’t know if they still are). This bloodthirsty image of the family deity—there he is, on my mother’s puja stand—I believe, provides some explanation of my family’s omnivorous habits. As I cut out Vetal’s image, the nervy night before the presentation, my mind drifts through all the things we once ate and have not for so long. I remember my grandmother, a “strict vegetarian" who confounded Kannadigas by heartily eating fish. I remember one of her daughters, my aunt, who made this exceptional fish biryani, and I remember that nearly three decades have passed since I last ate it.

With food on my mind, I continue with the presentation. One chart showcases the animals of Goa’s eastern forests—panthers, Malabar giant squirrels, tigers, sunbirds—that tourists almost never see. Another focuses on song and dance—the dekhni, the mando. The next day, summoning raw courage, I even demonstrate Goa’s famed lamp dance, jigging with an unlit brass lamp on my head as the children stare impassively.

The wife remains firmly seated, only getting up to talk, while I indulge in the required tomfoolery, shuffling my feet for wide-eyed five-year-olds while an iPad belts out an old Konkani dance favourite (Ye ye Katrina, if you must know, and if you do know it, I admit it is not strictly from Goa but a bit south). We couldn’t find raw cashews, so the children don’t get any snacks from us. Speaking of cashews, I did briefly consider telling them of feni, but quickly abandoned the idea.

Eventually, the presentation is quite a hit. They finally chortle when I dance to this old mando from way back:

The wife ends it with a bang, distributing little packets of seashells to all the children. If you can’t win them over, bribe them. Apparently that was successful because many children tell their parents that they want to go to Goa.

Happy—and relieved, really—that the presentation is past us, I continue mining the memories it uncovered, determined to track down and recreate that fish biryani. My mother helps greatly, digging up my aunt’s version from a family recipe book and translating it from Marathi (the family speaks both Konkani and Marathi; the book was published in Marathi to reach a larger audience). As you can see from the recipe, I was reasonably successful, substituting white rice with brown. I don’t know if Vetal would approve, but he would hopefully be happy that I tried. 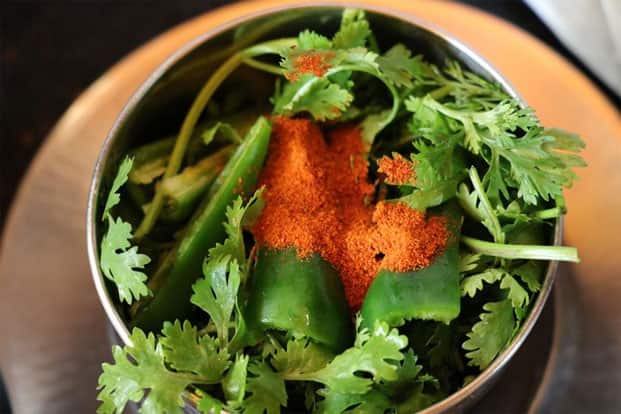 2 cups rice (basmati would be ideal, but I used healthier red rice)

A handful of coriander,

Grind all the ingredients for the marinade into a paste, adding a little water if required, and marinate the fish for at least 30 minutes.

In a large, flat non-stick pan, gently heat 1 tsp oil and sauté the tomatoes for 2 minutes. Add the fish and cook on each side for around 3 minutes, until half-done. Remove from fire and set aside.

Cook the rice with salt until-half-done. Move to a large dish and let cool.

In a large vessel, heat 2 tsp oil with the dry masalas (peppercorns, cardamom and mace) and sauté the onions until golden or dark brown. Remove and set aside.

In the same vessel or in a rice cooker, layer the half-cooked rice at the bottom. Spread out the fish over the rice as the next layer, reserving some of the marinade masala. Finish with rice as the final layer and sprinkle with the remaining marinade masala. Squeeze the lime juice over the pulao. Close and cook until done. If you are doing this the first time—as I was—it might take some poking around and lifting of the lid to see if the rice is done. The fish is likely to cook quickest.

Sprinkle with onions and coriander and serve hot.

This is a column on easy, inventive cooking from a male perspective. Samar Halarnkar also writes the fortnightly science column Frontier Mail for Mint and is the author of the book The Married Man’s Guide To Creative Cooking—And Other Dubious Adventures. Samar tweets at @samar11.