Home / Mint-lounge / WEE is the champion

WEE is the champion

WEE is the champion

Last month, I took my 11-year-old boy to our favourite toy store, Souvenirs (phone: 022-2288 4066) at Colaba Causeway, Mumbai. It’s a great place for boys and their toys, packed to the gills with the latest consoles and games, Spidey stuff (I know Lounge is partial to Superman, but wearing underpants over your tighties is not cool) and stuff such as telescopes, table football, invisible ink and itching powder. And yes, they have a pretty good collection of books too, in case some reader wants to flame me for my non-literary pursuits.

We were there to check out the Nintendo Wii gaming console (Rs22,000). With its innovative motion-sensing technology, and despite its relatively primitive game graphics, the Wii (pronounced WEE) has managed to bloody the nose of the much-hyped Xbox 360 and the PlayStation 3 consoles. The Wii has been selling twice as fast as Sony’s PlayStation 3 in Japan. In the US market, the Wii’s market share was 40% at the end of February, compared with 33% for Microsoft’s Xbox 360 and 18% for the PS3, according to a Google search. 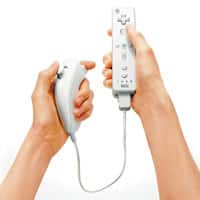 An Internet search reveals that a lot of people have the same idea. Video games and weight loss are rarely seen side-by-side, but the Nintendo Wii has enticed gamers the world over to get off the couch. In fact, researchers at the Liverpool John Moores University’s school of sport and exercise sciences believe Wii consoles are a good thing and could be used to help fight rising obesity rates among British youngsters. Using an ‘active console’ burns more calories than a classic one, because it forces the player to reproduce the same movements they would make if playing for real. A young person burns 60% more energy using a classic console than being inactive. Using the Wii for the same period increases that rate to 156%, according to the university’s study of a dozen 13- to 15-year-olds. Based on an average weekly use of 12.2 hours, 1,840 calories would be burned with the Wii console—40% more than with the classic one. That translates to 12.24kg over a year, they calculated. And with Wii, the heart rate leaps to 130 beats per minute compared to 85 with the traditional console.

Mickey DeLorenzo, a Nintendo fan in Philadelphia who, for six weeks, played the Wii’s sports games every day for 30 minutes, but made no other alteration to his diet or exercise habits, lost nine pounds (about four kg), down from 181. At his personal fan site, http://wiinintendo.net/2007/01/15/wii-sports-experiment-results, DeLorenzo documented his experiment and posted before-and-after photos, weight-loss charts and funny videos about his progress, where he poses triumphantly, Rocky-style, the Wii remote in his hands, on top of the famous steps. He’s got a book deal out of his experiences—The Wii Workout—and garnered many column inches in publicity. He’s even partnered with Traineo.com, a website that helps people track their weight loss and fitness goals, to create a Wii workout.

With the Nintendo Wii mania sweeping the world, the venerable British Chiropractor’s Association (BCA) has stepped into the act. According to its website, www.chiropractic-uk.co.uk, “Gamers should treat a ‘Wii session’ as any form of exercise and warm up adequately beforehand to prevent stiffness and possible injuries. Any unaccustomed exercise or activity lays you bare to problems that could occur from prolonged periods of active movements, so treat it as a gym workout—warming up and cooling down." The BCA has developed a ‘Wii Warm Up’ to help users retain nimble fingers, but avoid overexertion:

Shoulder shrug: Slowly shrug your shoulders towards your ears. Hold for two-three seconds, and then relax. Repeat three times. Because it is easier to relax a muscle after you’ve tightened it, you will relax the muscles in the shoulder and allow the blood to flow into the arms.

Make a fist: Hold the arm at right angles from the elbow. Make a fist and tense it, and the whole of your arm. Hold for two-three seconds, then relax and let the arm flop to your side. Repeat three times. This will help the blood flow and tone the muscles.

Neck muscle stretch: Try to make a double chin, to stretch the muscles at the base of the neck. Hold this position for two-three seconds and repeat three times. Always stretch very slowly.

My son’s Brazilian team regularly kicks my Argentinian team’s butt in Fifa 2007 on the PS2, and I’m getting tired of it. Perhaps it’s time to get the Nintendo Wii home and show off my double-handed Jimmy Connors-like cross-court service return that he’ll have no hope of reaching. Or, teach him to box, just like my old man did when I was his age. I may even get my wife off my back to join salsa classes if I get Dance Dance Revolution: Hottest Party. Gotta go. Gotta stretch those hamstrings.

Send your feedback to Harsh at gizmoguru@livemint.com