The only occasion on which I spoke to Shoaib Akhtar was at the Blue Elephant discotheque in the Hilton at Colombo, Sri Lanka. I was part of ESPN’s Hindi commentary team and one night decided to join the members of the production crew to shake a leg.

Several players were around too. There was no match the next day so there was no breach of curfew. Shoaib walked in well past midnight in a shimmering, body-hugging shirt and jeans I am sure he would have found impossible to peel off alone.

The world’s fastest bowler was quickly on the dance floor, alone, and worked himself into a sweat before taking a breather. When we were introduced, he broke into conversation that seemed to be made up of six words—half of them sounded distinctly unparliamentary. 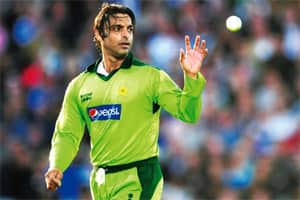 The mystery is finally solved, a full seven years later, in Controversially Yours, Shoaib’s autobiography.

Around 1998-99, Shoaib spent four months in Ireland playing league cricket. There, he stayed with the Patton family. One day the Pattons took him to a restaurant where he noticed a white girl looking at him. The conversation that followed between them is best described by Shoaib himself:

“What have you been up to?’’ she continued.

“Would you like to have a drink with me?" she asked.

She started giggling and asked, “Do you know any other word in English?’’

“Good," I grimaced back.

They became good friends thereafter, which gives a good idea of what Shoaib himself describes as “this unique blend of Irish-laced Punjabi English".

The autobiography runs into 271 pages (approx. 50,000 words), which suggests that Shoaib’s literacy in English has grown by leaps and bounds, even allowing for the liberal help from co-author Aanshu Dogra. One wishes there were more such anecdotes to not only bring some levity to the book, but also spring the character to life.

Shoaib was (is) a combustible, rebellious personality, but the book overloads the reader with laments about his troublesome knees and non-stop whining about the Pakistan cricket establishment, including generals who wanted to rule over players, or fellow players who tried to be dressing-room generals. 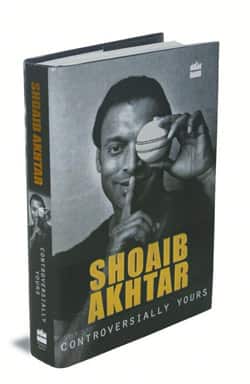 Ironically, he qualifies his criticism of Tendulkar by complimenting him, saying that for several years the Pakistan team knew that if they got him, India were sunk. He also says that in the past three years, Tendulkar has been able to bat freely and win more matches because of the arrival of players like Virender Sehwag et al, which pretty much stymies his original premise.

Test cricket demands different players perform different roles. It is only a stereotype that a batsman who goes helter-skelter for runs is a match-winner; a “defensive" Dravid might be a match-winner simply because of the manner in which he has coped and the time he has occupied the crease. Shoaib’s argument about Tendulkar and Dravid panders to a populist—not expert—belief of how Test cricket is played, which I find preposterous. But even more preposterous is to deny him the right to say this.

Controversially Yours tries hard to live up to its title but provokes only mildly. It moves in fits and starts and disappointingly falls short of full realization of potential—much like Shoaib’s career itself. The overall tone is sanctimonious, and the frequent use of Punjabi lines begins to jar. The scourge of match-fixing—in which he incidentally remains one of the few players untainted—is largely glossed over.

Where the book does score in bringing out his personality is in describing Shoaib’s growth into international cricket, overcoming the hardships of an underprivileged background and of a loner’s existence in a dressing room full of volatile players not averse to chasing drugs, women, or each other with bats; or when he debunks the so-called “religiosity" during Inzamam-ul-Haq’s captaincy when players practised their faith everywhere—from playing field to hotels to airplanes—for fear of being dropped.

I reckon the last point of view Shoaib could find more problematic—especially back home—than coping with the imagined slight against Tendulkar and Dravid.

Ayaz Memon is a sports columnist and commentator who writes the column Beyond Boundaries for Mint.