We Indians are proud of our democracy, and with reason. Over six decades, we’ve enfranchised hundreds of millions of people who were long excluded from the most basic of civil and social rights. Starting with the 1950 Constitution’s electoral set-asides for the lowest in the social order, extending to reservations for BCs and OBCs in other realms, and coming back to expanded electoral quotas now for women, we’ve used legislation to give a wide range of citizens a real voice in our political democracy. In this respect, we’ve leapfrogged ahead of some of the older, self-satisfied democracies —Germany, for instance—where minority racial groups, the poor, and women are still rarities in public office.

But perhaps we too are becoming a little intellectually lazy about our version of democracy. The thought crossed my mind as I considered the impending legislation that will triple the number of women MPs currently in the Lok Sabha to one-third of the available seats, and which will maintain that level by law for at least the next three general elections.

There is no doubt we have far too few women in decision-making positions, and this measure offers a swift remedy to that problem. But like most remedies, this one too comes with side effects. While some of those effects have received a good deal of attention in the debate over the new legislation, other, more insidious consequences may require more thoughtful attention than we’ve yet paid. 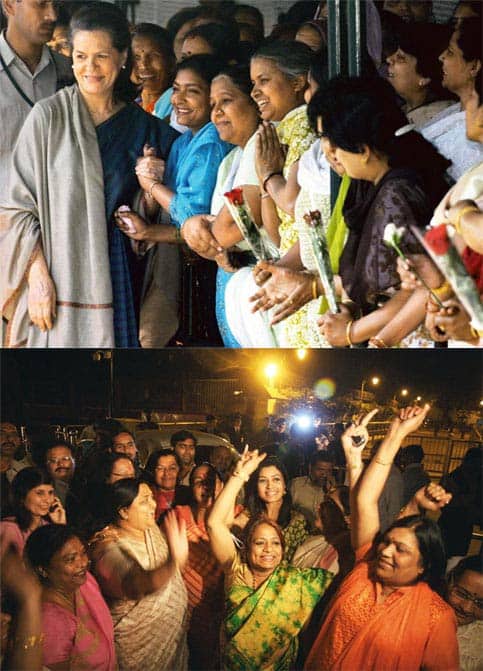 Victorious: (above) Congress president Sonia Gandhi greets supporters; and women celebrate after the passage of the women’s reservation Bill in the Rajya Sabha in March. Photographs by Vijay Joshi / PTI and Vipin Kumar / Hindustan Times

A second line of criticism couches its objections in terms of institutional design. This group accepts the utility of quotas, but it disagrees about the mechanisms chosen to give women greater representation. They argue cogently that the Bill’s adopted means—reserved constituencies, which are rotated every election—weaken both accountability and political parties. Indeed, with constituency rotation, elected candidates will represent their constituencies for just one term—so nullifying the only real form of sanction that electors have over whom they elect: to reject them when they stand again. Since two-thirds of all constituencies at each election would be such movable feasts, the attempt by such means to remedy a representational deficit will in fact create a massive accountability deficit. Instead of slapping a “Women Only" sign for candidates in certain constituencies at election time, such critics argue, we should require political parties to field a specified number of women candidates—but leave it to them to allocate constituency tickets.

The third line of objection is the line I find probes most deeply into the heart of the problem. It’s more philosophical than political, and it also happens to be the core reason our founders rejected separate electorates: because such electorates are premised on the idea that only like can represent like. In this view, conceding the principle of quotas and reservations in the electoral process, in whatever form, serves ultimately to entrench identities, and fragments efforts to build a community of individual citizens. While the principle serves expedient purposes, long-term it undermines both unity and individuality.

For better or worse, India has long relied on legal and legislative fiat, rather than politics and economics, to bring about social reform. But as we weigh the great positive gains of having more women leaders against the problematic ways in which we hope to accomplish this, it’s useful to step back from the current debate over legislation, to ask how electoral reservations fit into the larger picture of our democracy’s evolution.

Currently, 131 parliamentary seats are already reserved, for candidates from the scheduled castes and scheduled tribes. If one then adds the 137 general seats to be reserved for women, at the next general election, in just under half of all Lok Sabha seats (268 to be precise) the social and gender identities of candidates will be predetermined by law.

Dissenters: (above) Bahujan Samaj Party president Mayawati; and (from left) Mulayam Singh, Lalu Prasad and Sharad Yadav are among the prime critics of the Bill. Photographs by AFP and Arvind Yadav / Hindustan Times

Yet now, as we install an order that we imagine mirrors our society, we are replacing the idea of political representation with that of social reflection. Motivating this shift is an implicit belief that an order which more directly mirrors society as it is will be more legitimate than one that attempts to articulate a vision of what it could be.

I wonder, though, if we are being clear-headed about what sort of democracy we are building.

Democracy, wherever it has appeared, has been an answer to a particular local problem. As it emerged in England and America, it was an attempt to restrain the power of the crown or of a federal executive, and as such it tried to reconcile a conflict between the claims of state power and the rights of individual citizens. In France and continental Europe, on the other hand, democracy was seen as a means to reconcile a society at war with itself: where there were fierce divisions along partisan lines, marked by revolution and civil and religious wars. Democracy in those countries offered a way of resolving conflict between groups who sought to capture the state and to turn it to their own purposes—to build a revolutionary future, for instance, or restore a usurped monarchy.

In each case, distinctive forms of political representation were invented. In the Anglo-American model, a random mix of citizens in a defined unit of territory were asked to choose a single person to represent their interests. Once elected, the representative was expected to exercise judgement not just in favour of all within his territory but in the interests of the nation as a whole. This model, organized as parties of government and opposition, worked to check overweening powers accruing to the executive.

In many parts of the continental European model, the idea of representation was somewhat different. Here, the elected assembly was supposed to reflect, in proportional measure, the political affiliations, social composition and religious beliefs of the electorate. Electoral systems were not designed to represent mixed territorial constituencies—rather, they aimed to entrench in the political system the existing antagonisms of the social order, and so to mitigate their destructive capacities.

In the Indian case, representative democracy served to legitimise an inherited, largely undamaged colonial state. But, and more importantly, its purpose was also to politicize a social order at once rigid and riven by local loyalties. The problem Indian democracy had to address was the idea that certain forms of identity—whether of religion, of caste, or of language and culture—were primary and could trump other claims. By drawing such groups into political and electoral competition, the founders hoped to make those groups more malleable, and thereby neutralize their potential to corrode India’s unity.

Still, they immediately qualified the model of territorial representation that they adopted—single members representing geographical constituencies—by creating reserved seats for the lowest castes. Electoral democracy alone could not lead to the social justice to which the founders were committed, and so from early on they used law and administrative means to balance democratic numbers.

What we seem to have forgotten, 60 years on, is that those special provisions were conceived as temporary ones—expedients that the founders never envisioned as permanent features of the system. And indeed, reservations can make sense if thought of as something like a stimulus package—to kick-start participation in public life by excluded groups.

Yet not only have we failed to devise exit strategies from such stimulus measures, we’ve actually gone on expanding them further—with the result that we are fundamentally redefining the nature and purpose of our representative democracy.

Political representation is by definition a claim to speak on behalf of others. As such, it is an inescapably political idea, since it is always open to active dispute. When Gandhi declared, ‘‘I am a Harijan", when Nehru claimed to represent all Indians, Muslim and non-Muslim, their claims had to be sustained by arguments and actions. And their claims were vigorously disputed, by men like Ambedkar and Jinnah: men whose own arguments invoked their identities (to bolster their claims to be more authentic spokesmen) but also appealed to reasoned views about social justice and minority protections.

We are now unravelling that idea of political representation. We have embraced a politics in which claims have to be prefaced by the locution: “As a…" after which one inserts one’s caste, gender or cultural identity in order to silence other arguments. This “As a-ism" marks the triumph of an idea of democracy as expressive of social voice rather than representative of political vision.

In such a democracy, if one can assert an identity between leaders and followers, then leaders no longer need account for their actions. Thus, when an elected Dalit woman leader arranges to have herself festooned with a wreath of thousands of Rs1,000 notes, merely the latest display of her amassed illegitimate wealth, she relies on her identity to absolve any need to explain her actions. Her wealth avenges the past oppressions of “her" people. As the most important decision maker in India’s largest state, she doesn’t have to actually do anything—just be. At her worst, she exemplifies our new national motto: not “Just do it", but “Just be it". Reasoned action has ceded place to stupefied being.

But in far more places across our land, we seem to have moved from a view of reservations as a necessary if regrettable supplement to the workings of representative democracy to one where reservations are the basic operative principle of the system. And with that comes a troubling irony. The great achievement of 60 years of Indian democracy has been to politicize the social order: to transform apparently age-old social allegiances—of caste, religion and culture—into allegiances of political choice. The great risk, now, is that we will accomplish the reverse: socialize the political order, and entrench within it social identities and divisions.

Sunil Khilnani is the author of The Idea of India and is currently working on a new book, The Great Power Game: India in the New World. Write to him at publiceye@livemint.com