Michael Perschke has been married twice…to the same woman. In 1998, when Perschke was a general manager with Mercedes-Benz in Pune (1997-2000), he went home with his then girlfriend Kathrin to Garmisch, a village on the border of Germany and Austria, to get married. When they returned to Pune, his colleagues in India insisted on taking Perschke shopping for a kurta. “They told me to wear it the next day and be at Koregaon Park. When my wife and I arrived, we found that they had arranged for a traditional Maharashtrian wedding for us—complete with a priest and rituals such as kanyadaan.

“I wonder, if I were ever to get divorced, would I have to do it twice—the Indian way and the German way? Nobody has been able to answer that for me," he says with a laugh.

India is a country of relationships and warm people. At least that is what Perschke, 42, says he and his wife believe, thanks to lovely memories and some good friends made in India during their first stint in Pune, a decade ago. In July, Perschke returned to India for the second time as the head of Audi India, based in Mumbai. He did not hesitate to take up the job, just as he had not hesitated when he left a consulting job in Germany in 1994 to move to Hong Kong to be with Kathrin. “We had visited Asia earlier and had liked Hong Kong. So when Kathrin moved there for a six-month project, I followed, giving myself a month to secure a job there."

After many cold calls to every German company in Hong Kong—from banking and insurance to cars—he landed a job in the finance department of Mercedes-Benz. “I always knew I was better at sales or marketing, but I also wanted to stay in Hong Kong, so I took that job." Two years later, he got a chance to work in sales, but in India. Once again, Perschke seized the opportunity. 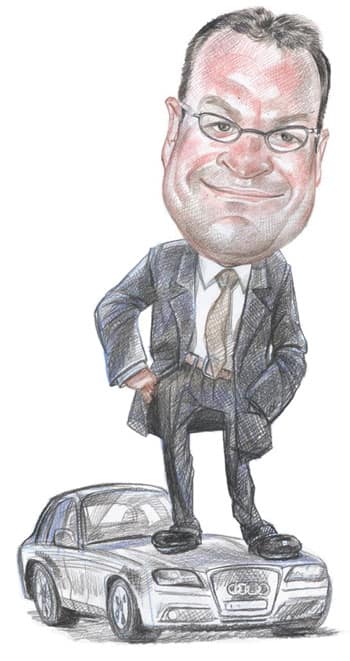 Been there, done that: Perschke has worked for Mercedes-Benz as well as BMW—Audi’s two main rivals. Jayachandran/Mint

“India is all about that—knowing people, building relationships. It’s a networking thing. Besides, our business model is also not so much activity-based as it is relationship-based. If you want to reach out to a certain target audience, you have to be in the same clubs as them; you have to meet them on the golf course in their city."

Yet Perschke does not believe that the way to woo an Indian customer is to hot-tail him. “India has the strong silent strength to resist if you push too hard. It is like a shy animal in the woods. If you run after it, it will flee. If you stand still and let it come to you, there is a much bigger impact."

Perhaps it was this thought process, the cautious approach, that went in his favour when his name came up for the India posting. “The car market, especially the luxury segment, is in an embryonic stage. India is not China; you still sell more motor scooters and bikes than cars. The Chinese are 8-10 years ahead of India in terms of car-buying decisions. That is why I always press for a cautious approach here." Though Perschke agrees that Audi currently holds the bronze position in the Indian market, he adds confidently, “I have just started in this competition." Being a sportsman—he used to be a ski instructor, claims to be an above-average mountain biker and trekker—Perschke enjoys the challenging position he is in.

In the last 13 years, a lot has changed in the luxury car sector. “Twelve years ago, whenever youngsters wanted to buy a new car, an official blessing from the head of the family was a must, maybe from the father or grandfather. Earlier, children could not drive cars bigger or more expensive than their parents. All that has changed now. I find all these people take their own decisions and want newer models."

Audi has that advantage, being the new kid on the block, so it represents “new toys for boys". The latest car on offer from its collection is the super sports car Audi R8 Spyder, which Audi India launched at the Mint Luxury Conference in Mumbai in March. The car was launched internationally in the first quarter of 2010 in Germany.

India, says Perschke, is strong on word of mouth, or a customer-to-customer endorsement system. Yet Audi does not subscribe to the brand ambassador approach to selling cars. Perhaps that’s why it believes in gifting its cars to top performing cricketers. “The Audi voyage to India started when Ravi Shastri won the Audi 100 (in the 1985 cricket World Championship in Australia). I don’t think there can ever be a better unofficial ambassador than Ravi for us." In line with collecting “unofficial brand ambassadors", Audi India announced that it would be gifting an Audi (the model is yet to be announced) to Yuvraj Singh, the Man of the Tournament at the recently concluded ICC Cricket World Cup.

According to the Society of Indian Automobile Manufacturers, between April 2010 and February, BMW sold 6,052 units compared with the 5,839 and 3,528 units sold by Mercedes and Audi, respectively. As Perschke begins work on increasing the Audi share in India, one thing he is keeping a close watch on is the management of expectations. “When someone buys an expensive car, they expect it to be flawless. People think that a car with the biggest wheels in India can run on full steam over potholes from Delhi to Chandigarh and come out unscathed. Sometimes, expectations are just too high, and you have to be able to tell your clients that in spite of the superior technology, even an Audi is bound by the law of physics and cannot perform impossible feats.

“I always tell my people, don’t over-promise and under-deliver."