It’s not a trek meant for unfit, city-bred people, especially if they are not nimble-footed. From Suyalbari, the last point till which a car can travel, the only way to get to Bhadyun village in the Nathukhan district of Uttrakhand is on foot. The 3km walk to the hamlet involves a steep incline, an uneven rocky path and narrow pagdandis (tracks) that run through the forest and are usually less than half a foot wide. Bhadayun has around 12 families, living in three clusters. 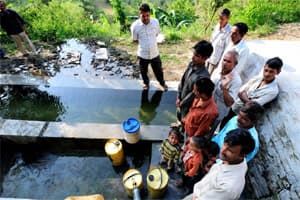 Spring of life: The revival of this water source at Bhadyun has stopped families from migrating. Pradeep Gaur/Mint

With the growing water shortage in the hills, water conservation has become a pressing concern. According to Chirag, irregular rain and changing land use patterns are the principal factors contributing towards the mountain springs drying up.

“We knew springs were drying up in the hills and (we) believe that if you want to address the issue of water in the mountains, and even in the plains (because springs do end up feeding the rivers), then you have to look for ways to recharge mountain springs," says V.K. Madhavan, executive director, Chirag. Put simply, it means creating conditions which allow more water to seep into the soil and hence add to aquifers (a wet underground layer of water-bearing permeable rock).

“We knew very little about water that goes into the soil. We always thought of ground water in context of the plains; we never wondered what it means in the mountains," says Madhavan. “When we started to think that mountains also have aquifers, we wondered how does water from rainfall get fed into these?"

Bhadyun was chosen because four years ago, a spring that had been dry for a few decades, came alive following a good rainfall. Dhanawati Devi, around 70, recollects that when she came to Bhadyun as a bride, one of the best things about the village was the spring. It meant no walking around the hills for miles just to get two pots of water. In fact, there was enough water, she says, to even take care of the livestock. But two decades ago, the spring dried up. Families started migrating because of acute water shortage. Her son, Ramesh Singh, a mason by profession and a part-time farmer, was also contemplating moving to the plains near Haldwani. “We had been asking the government to give our village a water pipeline connection, but that was taking a long time. I had almost decided to move out of Bhadyun when the saroot (mouth of the spring) came alive in 2007-08," says Singh.

“Two years ago, the Chirag people approached us and talked about recharging the spring. The plan included creating taals (pits) in certain areas in our farms, planting certain kinds of shrubs and fodder plants, and changing the slope of our farms. They said this may help our spring never to dry up," he says. Creating percolation pits at certain points near a spring helps accumulate rainwater and gives it a longer time to seep into the soil rather than gushing over the surface. Strategically planted vegetation and correct sloping of farmlands also does the same job.

Everywhere Chirag works, the onus of ensuring that the project goes ahead lies with the villagers. Chirag moved ahead only when the residents of Bhadyun were convinced. The villagers agreed not just to get their land surveyed by geologists, but also worked at digging the pits, etc. “Our belief has always been that whatever work we do for the community, it must be in partnership," says Madhavan. The Bhadyun project cost ₹ 53,300 out of which ₹ 16,600 was collected by the villagers and the rest was given by Chirag. At present Chirag has worked on recharging 30 springs in Uttarakhand and 14 more are being looked at. After that they will stop for a while to assess the results. Kaushal and Madhavan both say it is too early to say if their efforts have be successful. “We need to assess the data for at least another year," says Madhavan.