It is simple to set up and use, but misses out on the strength of its video streamer sibling Google decided that one Chromecast wasn’t enough—the one which focused on video streaming and connects to the TV and projectors through the HDMI port. Which is why there is now also a Chromecast Audio meant for music lovers.

Set-up: Round pegs, round holes

The Chromecast Audio streamer requires you to download the Google Cast app on your smartphone (free on Android and iOS). Once you do that, the entire process is rather simple—you get the step-by-step guide through the app to connect Chromecast Audio to the Wi-Fi network at home. The device is compatible with both 2.4GHz and 5GHz Wi-Fi networks, the latter providing better bandwidth and the former better range—take your pick, depending on the placement of the Wi-Fi router in your home. Once that is done, connect it using the 3.5mm audio cable to the input of your speaker music system. At this point, the streamer is ready to accept audio stream from various apps on your smartphone. 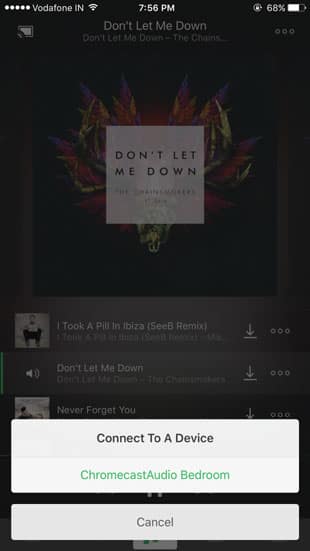 The Chromecast Audio’s small circular design, 2 inches in diameter and about half an inch in thickness, is what immediately catches the attention. The black colour has been spruced up with a groove pattern on one side, while the other has a smooth finish. There really isn’t much action on this tiny streamer, except one micro USB port for power, one 3.5mm port for connecting to a speaker and a button to reset the device in case there are performance issues or you need to connect to a different Wi-Fi. What you will get with Chromecast Audio is a yellow coloured 3.5mm audio cable, but if you need to connect to an optical audio input in an audio-video receiver or a soundbar, you’ll need to invest in a “mini-Toslink" to optical cable.

What Chromecast Audio brings to the world of music is the sort of simplicity and reliance on third-party apps that its elder sibling, the Chromecast Video, offers. We connected the Chromecast Audio to multiple speakers, including the Yamaha PDX-31 and the Marshall Kilburn. Detection was smooth, and depending on how good the Wi-Fi signal is, the playback from streaming apps begins.

The direct comparison in terms of audio quality is with the Bluetooth wireless standard, which is now a default option in many standalone speakers as well as audio receivers. Chromecast Audio can now stream up to 96KHz/24bit lossless audio from compatible devices, which makes it even more relevant if you have a massive library of higher resolution (or bitrate, in audio terms) audio files. And all through, the same tracks sound better using Chromecast Audio because of the availability of greater bandwidth than what Bluetooth allows.

We did notice an unexplained static which showed up occasionally for a few seconds—no connections were at fault.

Despite the strong foundations, things aren’t as rosy as they seem. Unlike Chromecast Video, which will certainly support a lot of your favourite video streaming apps, that isn’t the case with Chromecast Audio. For example, in India, what you get is compatibility with apps such as Saavn and Wynk Music. But for someone who perhaps has their entire library of music on Apple Music, they are out of luck, for the moment. Chromecast Audio does not work with all audio playback and streaming apps on your smartphone, and that is its biggest limitation compared with Bluetooth, which just simply works.

Verdict: Price glosses over the shortcomings

At ₹ 3,399, it might perhaps not be an entirely outlandish idea to pick up a Chromecast Audio and plug it in to one of the speakers at home which doesn’t have built-in Bluetooth. But if you rely on any particular music streaming service to get your fix of the latest tunes, you’ll need to be doubly sure if it currently works with Chromecast Audio.