What is it with mysteries that give us such kicks? At this year’s Jaipur Literature Festival, I tried to get my head around this mystery of mysteries as I drifted between venues like a kayak without its Eskimo, and heard some of the best minds illuminate aspects of fiction.

There was Vikram Chandra, lover of genre literature, expert on detective fiction, co-writer of a Bollywood action film, who described his masterwork Sacred Games (2006) as an anti-thriller. He discussed how the archetypal detective story and its display of rational minds investigating problems, perhaps can be seen as the only genuinely modern literary form, and the literary detectives (such as Sherlock Holmes) are typical post-Enlightenment figures. 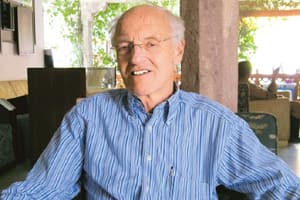 I buttonholed Michael Frayn—the brilliant playwright and novelist—who uses mysteries as an engine for some of his plots. Frayn said: “Everyone is drawn to the mysterious. Wittgenstein said once, commenting on Freud, ‘Beware the charm of the uncanny.’ He suggested that Freud is popular because he seemed to be investigating the realm of the unknown, something Wittgenstein felt one should be cautious about."

It seems to Frayn that a lot of human energy is devoted to answering the mysterious questions in life, as seen in his multi-award-winning novel Spies (2002) about two boys during World War II, who imagine that the mother of one of them is a Nazi agent. Spying on her, they reveal unexpected secrets. In his famous play about the theory behind the atomic bomb, Copenhagen (1998), described by one reviewer as a “cerebral thriller", the scientists Bohr and Heisenberg—stuck in a timeless post-mortem limbo—discuss a mysterious meeting they had in 1941 which has been the focus of much subsequent debate.

In the Booker-shortlisted Headlong (1999), a novel that combines art history with scholarly investigation, the protagonist suspects that he has discovered a long lost, priceless Bruegel painting, with enormous ramifications. So what mystery triggered that story?

“That question is often hard to answer, but in this case, I can tell you absolutely precisely how it started. I was in the Kunsthistorisches Museum in Vienna, where they have one of the best Bruegel collections, looking at Hunters in the Snow, one of the world’s greatest paintings. Then I looked at the painting next to it, Return of the Herd, and then The Gloomy Day, but when I read the signs I realized that they belong to a series illustrating the seasons and there was a season missing! Immediately, I felt a novel coming: Where could the missing season be?" Frayn’s conclusion was that it wouldn’t be in any established collection, but in the hands of someone who had inherited it and couldn’t recognize a Bruegel. “So if you saw that picture on this man’s wall, what would you do? Would you just say: Oh, I think you’ve got the missing Bruegel? The problem for the protagonist is to find out if it really is the picture he thinks it is and also to get hold of it. There turns out to be more opposition to him than he supposed at the start."

There perhaps lies part of the answer: Like their readers, great writers are attracted to mysteries and that is what makes their books so mysteriously alluring.

Zac O’Yeah is a Bangalore-based writer of crime fiction. Write to him at criminalmind@livemint.com