To celebrate World Dance Day on 29 April, a series of festivals have been organized around the country. We bring you the details of the three of these events:

Dance and camera—two visual forms of communication—so different in terms of the impact on the audience, yet so intrinsically woven together. These are the permutations and combinations that this year’s edition of Danzlenz is hoping to explore.

/Content/Videos/2009-04-28/Lounge280409.flv55470d6c-330e-11de-b0d4-000b5dabf636.flvPart of the three-day World Dance Day Celebrations by the Kri Foundation and the Prasidhha Foundation, Danzlenz 2009 is a compilation of five short films on dance by Chennai-based documentary film-maker Soudhamini. “I was inspired by the Dance on Camera Festival when I’d gone to New York, and started Danzlenz here in 2006," says Arshiya Sethi, managing trustee, Kri Foundation. Sethi believes dance to be the most fragile of Indian arts and thinks the cinematic medium will aid people to experience this art form in more ways than one.

Soudhamini, a visiting faulty member at the Film and Television Institute of India, Pune, intends to take a look at dance as a complete performance. The presentation will take the audience on a journey exploring the different facets such as: * Analysis (an in-production work on the concept, rehearsal and performance extracts from Adishakti, a Puducherry-based theatre group)

* Insight (Soudhamini will show an extract from her most famous work Saga of a Poet, on the Tamil poet Subramania Bharati. “The lens replicates the stage or classroom and the particular focus on the poetic text," she says)

* Spectacle (an extract from her 35mm-film Pitru Chayya, it explores the notion of how even while performing the secondary role of recording and preserving, film can add a further dimension—that of enhancing the spectacle aspect of stage performance)

In an email interview, Soudhamini spoke about her films and her thought process behind the presentation:

What is the basic premise of your five-part presentation on the relationship between film and performance?

(It) has been a conscious decision to align my work with our traditional arts and develop as it were an indigenous aesthetic for my cinema. Also, my current work Solo is very involved with theoretical questions about documentation and creativity, which are in a way the two ends of the spectrum, so I really started to articulate—in seminars and stuff—about this “range" of responses one can take through film towards performance.

You’ve mentioned how most of the times a film is reduced to just a tool, yet you will showcase it as a means of making a spectacle of a performance. Isn’t that contradictory?

Maybe contradictory, maybe not. I think when by shooting you “reduce" it to mere record, then you’re not making full use of the film medium, and also not doing full justice to the performance aspect. But if you can enhance the spectacle aspect... then that is one direction you can take in the translation or adaptation to a different medium.

Is there any such video/film/documentary that you have seen, which you think has not only done justice to the feel of a live performance, but possibly even enhanced it?

I can’t speak of other work as I’m engaged in the struggle myself… The film I’m showing in entirety (Vettaikkoru Magan—A Son for Hunting) is the closest I’ve come in this relation between performance and film. I’ve also been told by some audiences that it was better than seeing it on stage. 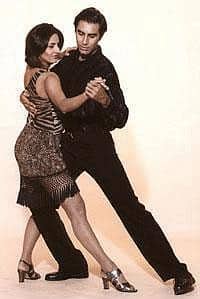 Bharatnatyam dancer Geeta Chadran is organizing a two-day festival at the India International Centre, New Delhi, on 2-3 May. A seminar which will focus on strengthening the global footprint of Indian classical dances, while chalking out strategies to promote the dance styles will also be held on 2 May. It will be moderated by choreographer and cultural activist Anita Ratnam, and the speakers include author Shanta Serbjeet Singh, chairperson of the Asia-Pacific Performing Arts Network; Jayant Kastuar, secretary of the Sangeet Natak Academi, and Sanjoy Roy, MD, Teamwork. The seminar will be followed by dance performances by Bharatnatyam dancer Ragini Chander Shekar and Mohiniattam dancer Jayaprabha Menon, among others.

Sandip Soparrkar is organizing a star-studded show at Tequila Lounge, Andheri, Mumbai, where celebrities will shake a leg. “The theme of the show is to bring people from different walks of life and have them converse in the universal language of dance," says Soparrkar. The hour-long show will feature 18 dance styles from across the world by couples such as pop singer Anaida and photographer Vicky Adnani. Soparrkar himself will pair with model Jesse Randhawa for Bahai Bossa Nova number and a Russian classical dance; with actor Kitu Gidwani for a Spanish Paso Doble dance; and with actor Sonali Kulkarni for the Brazilian Samba. “People don’t know anything about international dances, beyond Salsa. So this is a great way to let them know about the different styles," says Soparrkar.