Tallinn | Reaching for the Skype

Tallinn | Reaching for the Skype

Molly Malone may be quite a distance away from the roots of her name, but she attracts a jolly crowd nonetheless. This Irish pub opposite the town hall in Tallinn’s old town square draws tourists and locals alike to its outdoor seating, especially on a sunny day. Tables are packed closely together and buxom waitresses bustle about cheerfully, slamming down a tankard here or clearing a table there. 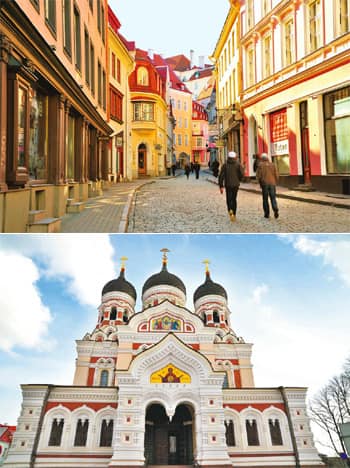 I was sitting at a table that was shared by two others—a student from Moscow and a tourist from Rostock, Germany. The former was chewing on life and chunks of marzipan while waiting for his beer. The latter had her laptop out and was taking advantage of the free Wi-Fi floating about by having an animated conversation via Skype.

Sitting between the two, I was caught in a classic moment: Both were enjoying Estonian inventions in the heart of its capital. Estonia gave the world Skype, the revolutionary peer-to-peer software that has redefined Internet telephony. In the medieval town setting that wouldn’t be out of place in a Brothers Grimm work, pioneering software and Wi-Fi networks could seem like faces of a very distant future. But its cobbled streets and medieval skyline notwithstanding, Estonia has firmly set its sights West. Ever since it woke to a capitalist dawn in 1991 after decades behind the Iron Curtain, Estonia—a tiny country in the Baltic region—has been in a hurry to catch up with the rest of the world. Which is why Estonians were the first citizens anywhere to use the Internet to cast their vote in the legislative elections in February 2007 and why they routinely pay their parking fees from their mobile phones.

Marzipan, on the other hand, was born out of a master’s terrible cold and an apprentice’s fussiness back in the Middle Ages. Legend has it that an apothecary at the Town Hall Pharmacy once prepared an elaborate medicine to cure a town alderman. But since a nasty cold had affected his taste buds, it fell on his lackey Mart to taste the medicine. This being the time when medicines weren’t considered effective unless they tasted supremely ghastly, and Mart being something of a sweet-snob, he apparently replaced all the bitter ingredients in the concoction with more palatable ones. The new medicine was delivered to the alderman, who not only made a full recovery but also loved the sweet pill so much that he ordered vast quantities of it, never mind that he was fit as a fiddle.

The fame of this preparation grew around Tallinn and beyond, and the sweet bread-like confection came to be known as Mardileib or Mart’s Bread or Marzipan. Today marzipan shops in Tallinn do brisk business because making colourful marzipan in all kinds of shapes has become a finely honed art.

From my vantage point, I could see the Town Hall Pharmacy, the very same building where marzipan had had its momentous birth. Functional as a pharmacy since 1422, it has not always doled out such pleasant medicine. Among its stomach-churning remedies were burnt bees and powdered unicorn horn. Today it sells modern medicine but a room at the back displays a collection of medicinal bric-a-brac from the days gone by.

My coffee downed, I set off for a walk around this predominantly pedestrian area. With no fixed agenda, I strayed into St Catherine’s Passage, easily one of the most photogenic lanes in the old town. The street is home to craft and flower shops and also a medieval glass-blowing outfit. Amid the very medieval architecture—complete with walls serrated to facilitate archers—of the old town, one monument stands out. The Alexander Nevsky Cathedral, with its colourful onion-shaped domes, is very Russian-looking and quickly became hated as a symbol of czarist power when it was completed in 1900. But post-1991, when Estonia broke away from the Soviet Union, the church was carefully restored in the original style and today serves as the main place of worship for the Russian Orthodox faithful—besides, of course, filling in as an excellent backdrop for photographers.

The previous evening, I’d been at Kadriorg, a neighbourhood east of the old town, developed by another, better-loved Russian, Peter the Great, in the 1700s. The elaborate baroque palace he built for his wife Catherine is an art museum today and the estate around it stands amid a lovely area with upscale residential mansions and parks with trees in full flower.

The economy of Estonia, too, is beginning to bloom. Even though they still aren’t rich enough to warrant the currency changeover to Euro (though it’s accepted readily enough), Estonians certainly don’t have a Second World look about them. Their manner is self-assured, some of them drive flashy cars and most of them dress sharp, the cobblestone streets an unfriendly but not incongruous backdrop for their designer heels.

Standing outside the Rotermanni Keskus, a flashy shopping centre just outside the old town, it’s hard to believe that less than two decades ago, running hot water was scarce and sporting Western apparel could have seen you hauled up for questioning by the KGB. Locals still joke about a Soviet-era hotel called the Viru: It was the only hotel allowed to accommodate foreigners, and the KGB allegedly embedded microphones in all the walls and ceilings—so much so, locals say, it could be built of “micro-concrete".

The hotel has been taken over by Finnish group Sokos Hotels and is now a flashy place to stay, but the Estonians have long memories—reinforced by the discovery of a KGB listening room by engineers from the new company. While studying floor plans, they are said to have come across a mysterious unmarked door. On tracking it down, they found the room as it was when the Soviets left hurriedly in 1989. Stepping into it takes one, well, back to the USSR.

During Soviet times, Estonians weren’t even allowed inside the hotel or the restaurant unless they bribed the doorman with a few roubles. Today, in Tallinn, you are spoilt for choice for restaurants, as also entertainment, with clubs, wine bars, pubs and lounges jostling for space with “gentlemen’s clubs", easily identified by the silhouette of a woman dancing behind a curtained window.

Estonia is still discovering capitalism and in Tallinn it shows in its exuberance and inclusiveness. The country is old but the mood is new—an infectious combination. In Tallinn, the party’s just begun.

Estonia is now part of the European Union and a Schengen visa is required to visit the country. Procure one from the Finnish embassy in New Delhi (www.finland.org.in) for Rs5,800. However the currency is still the EEK or the Estonian Kroon. One Euro will buy you approximately EEK15. The best way to get to Tallinn—and by far the most scenic—is a Viking Line ferry (www.vikingline.fi) from Helsinki across the Gulf of Finland. The ride takes about 2.5 hours and the boat is like a lovely floating hotel; fares from €18. Tallinn also has an airport at Ulemiste, with regular connections to most countries in Europe. Finnair flies to Tallinn from Delhi; economy ound-trip tickets cost Rs37,172.