"storyDirectUrl"
OPEN APP
Home >Leisure >The long and short of it

The sari, caught in a vicious knot of dropping demand and the slow death of weaving traditions, is Rta Kapur Chishti’s life mission. 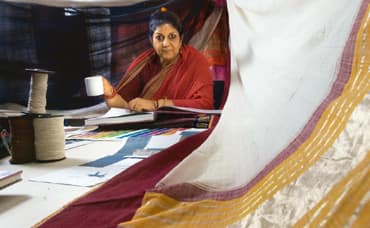 Sari story: During her research and travel across the country, Chishti found that the sari belongs to a region rather than a social strata. Priyanka Parashar / Mint

Chishti, 61, started researching the handloom sari over 20 years ago. She travelled to all the traditional handloom centres and studied the weaving, dyeing and draping methods. She chronicles this in her book Saris: Tradition and Beyond. The book also demonstrates 108 ways of draping the sari, with step-by-step graphics.

When we meet, she is dressed in a grey Ikat, draped without a petticoat, so the bottom is more pantaloon, less sari. That style, she says, is a combination of two or three drapes. “I wear the sari based on what activities I have scheduled for the day. This is the run-around and get a thousand things done drape," she says. Draping it differently and reinventing it to suit modern-day living is Chishti’s solution to reviving the sari.

Travelling to the other India helped bust several myths about it, says Chishti. “One, I was surprised to learn that the sari belongs to a region rather than a social strata. Everyone from the cobbler’s wife to the goldsmith’s wife wears the sari of the region. Second is the notion that the hinterland is unsafe. In all my travels, I have not had a single scary experience. Often, when the local goons find out what we are there for, they position themselves outside the room for ‘protecson’," she says.

We browsed through her book to pick these 20 little-known facts about the sari:

1. The modern urban way of draping the sari was first adopted by Parsis and then popularized by Gyanodanandini, Rabindranath Tagore’s sister-in-law. She went to Bombay with her civil servant husband in the 1870s and adopted the Parsi way of wearing the sari as the local Bengali style of draping was not considered elegant enough for outdoor wear. When she returned to Calcutta, the Bombay Dastur, as the drape was called, was adopted by the society ladies. 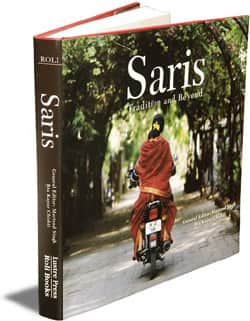 2. The sari is woven with different structures for different parts. The border of the sari is woven thicker because it is subject to a lot of wear and tear. So, technically, a sari should not require a fall, since it is in-built in the border. Most embellishments in saris were originally intended as forms of providing greater strength and were not merely ornamental.

3. The blouse is a relatively newer phenomenon. It is an amalgamation of the British sense of modesty and the Parsis’ adaptation of the local dress. Parsis wore long blouses and pantaloons and when they switched to the sari, they draped it over this. Some elements of the blouse also came from the British corset. When it was adapted for the sari it was initially worn long. With time, the blouse got shorter.

4. In Kanchipuram, the custom of girls marrying their maternal uncle or father’s sister’s son was the solution to a manpower problem. The sizing of the long warp of the loom required the effort of at least 30 people, usually family members. This marriage within the family ensures that members on the paternal and maternal side would be available to work the loom.

5. In Andhra Pradesh, older women only wear coarse, heavy saris in dark, ripe colours. This is because they do not wear a petticoat and the colours ensure nothing shows through.

6. One hand-span is the maximum width of the border. This is measured by clutching one palm over the other and spreading the thumbs. This forms a complete veil over the head, usually known as the ghunghat.

7. The Portuguese banned sari weaving for 200 years in Goa. Many weaving communities went underground and continued to service their clientele, which consisted mainly of fisherwomen.

8. The Neelaha is a white sari with an indigo-dyed border worn by the Devi (goddess). In Chhattisgarh, the Devangans maintain a fast on the day they weave this sari.

9. The secret of the saris from Bihar is that the emphasis is on texture rather than pattern or design. The texture is built up with varying densities in body, borders and end pieces. In hand-reeled tussar, the texture is created as an interplay between dense warp and missing warp.

10. In Jharkhand, weavers used to move from village to village carrying looms on their shoulders. They would install these in open grounds and weave according to the clients’ requirements.

11. Saris serve many purposes. In Bengal, they are used as fishing nets, the vegetable vending communities cover the basket on their head with a wet pallu. It is also worn with a big pouch in the front and used as a shopping bag for vegetables and groceries.

12. In Gujarat, the sari is more dominantly worn as a two- or three-piece combination of the stitched and unstitched. Other than among urban Jains, Patels and Parsis, the sari is worn as a long veil draped over a skirt.

14. In Bastar, the yarn is treated with oil and bleached with cow dung and then dried in the sun. It is washed off when the cow dung turns a particular shade.

15. The Tadap Pata is a specific kind of sari that is presented to the bride’s mother. In Chhattisgarh, it has an ornate outer end piece and three types of temple pattern on the borders. It is typically worn as a drape over the shoulders.

16. In Hatta in Madhya Pradesh, there are only 14 weavers working on the traditional loom. Their saris are known for their well-woven texture, proportions and strength. The saris can take two years of continuous wearing. Because they are strong and worn for a longer period of time, the saris also boast of the double aanchal, which allows them to be worn both ways.

17. The Maheshwari sari has a distinct colour connotation. The departing bride wears green, a pomegranate pink in tonal checks is an auspicious offering at a wedding and combinations of black and red, black and yellow and red and green and black checks are used for everyday wear.

18. In Burhanpur, Madhya Pradesh, the sari-weaving tradition was well augmented by a flourishing market in turbans and dupattas until 1942. That story ended when Gandhi became popular and people switched to Gandhi topis from 40-yard turbans.

19. In Chanderi saris, the buti or the motif in the body was introduced as a way of keeping the weaver’s interest alive. It helped break the monotony of plain weaving.

20. The block printers in Madhya Pradesh’s Mandsaur district use a distinctive flower motif that is placed at the end of the sari. This is a trademark that allows discerning buyers to recognize particular printers. An early form of brand building.

Saris from every state have unique motifs and histories. We cull some of them from Chishti’s book