Farahad Zama’s fourth novel in the series which began with The Marriage Bureau for Rich People welcomes us back to familiar territory. Here is the gently evoked Vizag (Visakhapatnam), where the sun may beat down fiercely during summer and the rain rattles windows in the monsoon, but where the reader is never quite allowed to register the discomfort of either. Here is upstanding and charmingly hare-brained senior citizen Mr Ali, who runs The Marriage Bureau For Rich People (which does what it says on the tin), and his wife, the kindly but overbearing matriarch Mrs Ali. Their wide circle of family and friends occasions plenty of anxiety as well as much affection for the elderly couple. The Alis are the nominal protagonists of the story, but the books are carried forward thanks to the upheavals in the lives of these returning guest stars: Aruna, Mr Ali’s gentle and stoic assistant, now happily married and expecting a child; Pari, the Alis’ widowed niece, and Rehman, their son, an activist and a civil engineer who shares many of his parents’ good qualities, but manages, as children so often do, to be their polar opposite. Added to these are the rotating cast of applicants to Mr Ali’s marriage bureau, headed this time by a millionaire anxious to find a match for his beloved granddaughter, but thwarted in his efforts by the girl’s alcoholic father. 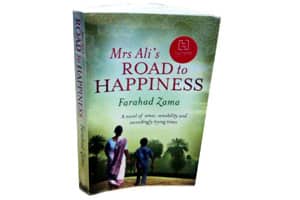 However, in Mrs Ali’s Road to Happiness, Zama’s seemingly unshakeable good humour acquires an edge that cuts closer to the bone than ever before. Zama habitually allows the vicissitudes of life in an Andhra beach town to disturb, but never quite displace, the peace of the Alis. This time around, things have changed. Pari’s adoption of a young boy and her determination to bring him up in the faith of his birth, Hinduism, upset both the imam of the Alis’ mosque and a local Hindutvawadi outfit. The Alis are troubled by government plans to widen the road outside their house, and the fate of Mr Ali’s bureau seems to hang in the balance. Since the Alis appear to have lived a life in which religious tensions have played little part—Mr Ali can still stop at sentimental moments to consider how his watchman embodies the “true values of India: loyalty and tolerance"— the fracas over Pari and her son Vasu creates a new seriousness. Zama’s impeccably even tone cannot quite conceal the bitterness of the plot.

However, this is a series about incurably romantic, warm-hearted souls, and the book remains an essentially comic story. For the first time, though, Zama’s plot is not only thoughtful but thought-provoking. Some of the minor irritations of the previous books are carried over here: Zama’s rigorous explanations of terms unfamiliar to Western readers will still jar Indian readers who know what the urs of a Sufi saint is, and spell the Hindi word for lentils as “dal", not the unhelpful British “dhal". But there is more in this book than the promise of a pleasant afternoon spent mulling over the minor problems of fictional heroes and heroines. Those attuned to McCall Smith’s wavelength will find much to please them in this book. Those already familiar with Zama will be delighted to reacquaint themselves with his best characters, Pari and Rehman (the Alis’ civil engineer son), and the way they grow through the book.