Figures from the past whose ideas and message stand the test of time are christened “great". By this criteria—and beyond the Indian state’s statue-building and road-naming drive over the last 60 years—the Father of our nation seems to qualify eminently. While non-violent satyagraha and universal brotherhood appeal to everyone, some of Mahatma Gandhi’s more “kooky" ideas about machines, factories, khadi and village republics seem a little less outlandish in the age of climate change and persisting poverty on a massive scale. 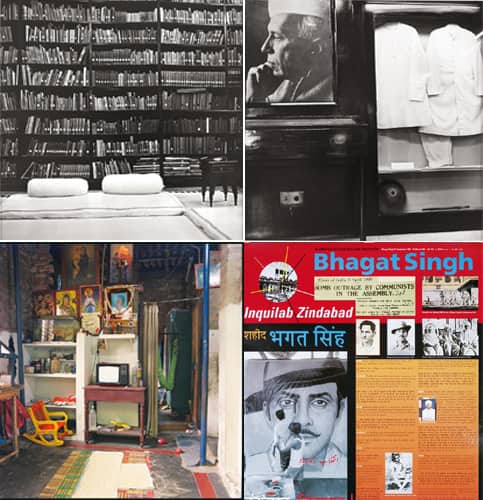 His story: (clockwise from top left) Two images from the Allahabad series by Singh; Bhagat Singh, a poster designed by Rahman for Sahmat; and from the Television series by Jodha. Images Courtesy Chemould Prescott Road Gallery

No wonder then that a hundred years after it was first published in 1909, his book Hind Swaraj continues to provoke discussion and debate—and also gain steadily in readership as well as appreciation for containing some of the ideas that form the foundations of our republic.

Shortly after he turned 40, Gandhi wrote Hind Swaraj while sailing from London to South Africa, outlining in brief his basic beliefs and philosophy. Gandhi always saw his life as a work in progress and consequently never shied away from changing his opinion even if it contradicted something he had said or believed earlier. Nonetheless, a couple of decades after he wrote Hind Swaraj, he said he stood by every word in that slender volume; and it is now widely accepted as a more or less definitive primer on Gandhian thought and philosophy.

Chemould Prescott Road gallery in Mumbai is marking the centennial of the book’s publication by organizing a show of works by five photographers selected by writer and critic Ranjit Hoskote. He calls the show “an extended meditation on Gandhi’s continuing relevance" and has chosen the photographers because they have “mixed practices"—i.e. their field of activity extends beyond photography to include other art forms, and also embraces concerns of larger public good in the form of advocacy, writing and “strong and emphatic political commitments".

The show is, then, an exercise in stocktaking—where do we as a people stand today, a hundred years after Gandhi wrote Hind Swaraj; and where do we as a nation stand today, 60 years after we gained Swaraj (self-rule). It is titled Detours because, as Hoskote explains, “the history of post-colonial India is not a linear progression…and in a roundabout way comes back to Gandhi’s questions."

“(This) is a historical exhibition, both in the choice of its subject and in its treatment," he adds pointing out that most of the works on display are not new and represent “long term commitments by the artists". There are Dayanita Singh’s photographs of Anand Bhawan—the grand ancestral home of the Nehru family in Allahabad that has become a latter-day pilgrimage site; and there are Ram Rahman’s posters and collages, which trace some of the strands that have defined India in the years since independence.

Rahman’s father, the architect Habib Rahman, was among those hand-picked by Nehru to give expression to his vision of India, and his mother was the Kathak dancer Indrani Rahman. His parents, he says, were a part of “Nehru’s renaissance generation", and he a product of that generation. The collages juxtapose images of buildings designed by his father in the 1950s and 1960s with those showing the same buildings in their less-than-pristine state today. To him they represent “the dying of the dream".

There is little overt history in Ravi Agarwal’s and Samar Jodha’s photographs—they are more about today’s India, capturing both its squalor and its enterprise. The history lies in the show’s context—Hoskote calls their works, and those of the other three artists, “position papers on the republic".

In a set of three images titled Scene of Crime, Agarwal depicts his quest for three very Gandhian ideas of “truth, knowing and peace"—though there is no way of telling that from the photos which have an abstract air about them. “I have (always) been driven by a sense of personal location, personal ethics and personal consciousness," says Agarwal, whose art and photography has always been informed by his concern for and advocacy of, environmental issues. Gandhi, he says, is important to him not only because of what he preached but because he “walked the talk". For Gandhi, “the self is the centre—not in a selfish way, but in a responsible way."

Born out of this quest for self- improvement, Gandhian ethics and philosophy of life reach outward to encompass, quite literally, everything—and by that token alone all works on display resonate with his concerns. Detours is a meditation on Gandhi and a look at how far his children have come in their own version of the Gandhian Project.

Detours is on at Chemould Prescott Road gallery till 19 January. For details, log on towww.gallerychemould.com