Thanks for Visiting Mint
You seem to have an Ad Blocker on. Please turn it off in order to continue, or whitelist Mint
HOW TO TURN OFF AD BLOCKER
OR
REFRESH IF YOU ALREADY TURNED OFF THE AD BLOCKER
Home >Mint-lounge >Features >Is your home making you ill?

Is your home making you ill?

Indoor air pollution is killing more people globally than the poor quality outdoor air, and air purifiers meant for homes, are a solution

The moment the word pollution is mentioned, most people visualize the smog over New Delhi, haze over Beijing or the smoky exhaust from your neighbour’s scooter. But, a new research by the University of Surrey released on 21 April points to something almost all of us ignore—indoor pollution. In 2012, the last numbers available, indoor pollution was the reason for the death of 4.3 million people globally, as opposed to outdoor pollution, which was linked to 3.7 million deaths. This is primarily because we are spending an inordinate amount of time indoors. (Read more here).

Pollutants such as cooking residues, fungal spores, indoor smoke, paint fumes, varnishes, pet dander etc. are making more people unwell daily, and causing what is now known as Sick Building Syndrome. While your house may look clean, it may still have a very high concentration of pollutants in the air. Indoor air purifiers do help considerably in such a scenario.

We review the two newest air purifiers in the market—Atlanta Healthcare’s Universal 450 with a built-in Humidifier and the Dr. Aeroguard SCPR 700 by Eureka Forbes. 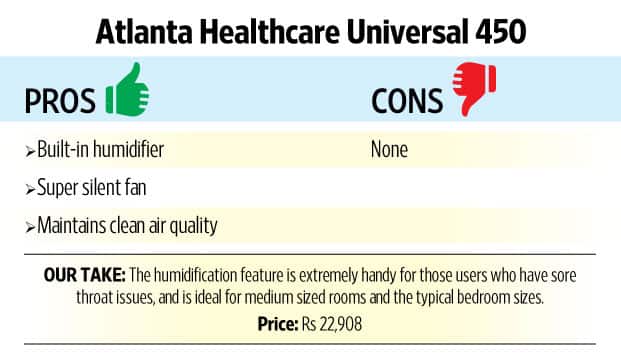 In terms of the design and usability, the Universal 450 is as simple and easy to use as they come. The control panel at the top comprises of clearly marked buttons and a screen that shows you the exact settings. The air intake happens from the sides, and the clean air is pushed out from the top.

A lot of air purifiers meant for homes tend to ignore a very important feature—a humidifier (Panasonic’s FVXF35MAU is one of the few to have that, for example). Ask someone who has a problem of dry throat how uncomfortable it is to wake up with a sore throat every morning. Atlanta Healthcare’s Universal 450 purifier adds the humidifier feature—fill water into the 1.08 litre water tank, and what emerges is a steady stream of mist that adds moisture to the air in the room, which eases breathing, prevents throat ailments and also keeps the skin hydrated. In fact, the Universal 450 also allows for three speed settings for the mist, which will be extremely handy during the very dry peak summer and peak winter air. Even at the highest mist speed, this capacity is enough to last an entire night.

This purifier has a peak power consumption of 65W, has a Clean Air Delivery Rate of 225m³/h and is ideal for rooms around 450 sq. ft. in size. In a 300 sq. ft. room, this purifier reduced the PM 2.5 level from 92% to 45% in 5 minutes, and maintained that around 41% even in the low power sleep mode. The fan is super silent, and even at the highest speed, it is barely audible.

We believe that this purifier is ideal for medium sized rooms, such as a bedroom. The benefits of the humidification feature are tremendous, and it packs in enough power to clean the air quickly, and maintain that level throughout. And adding to the convenience, this purifier also switches on automatically after an electricity cut, something rivals don’t do. 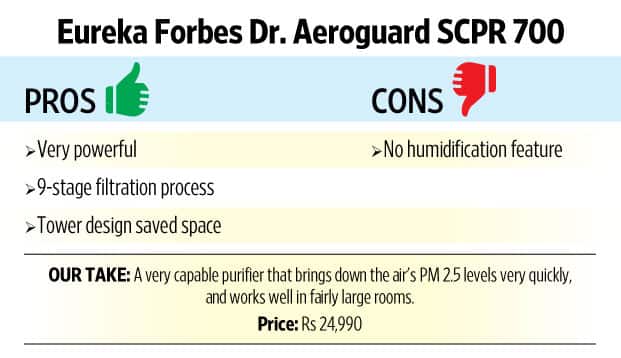 A lot of thought seems to have gone into the design aspect of the SCPR 700. It has something resembling a ‘tower’ design, which means it is vertically taller and isn’t very wide. This does make it easier to place this between pieces of furniture, particularly in modern day apartments which may not be very big. The large air intake vents are on the sides—there are composite filters on either side, and the clean air emerges from the large outlet at the top.

With a maximum power consumption of 45W, the Dr. Aeroguard SCPR 700 has a Clean Air Delivery Rate (CADR) of 360m³/h and can cover almost 699 sq. ft. area. Simply put, this is powerful enough for living rooms, dining rooms and fairly big halls at home. The interesting bit is that while most air purifiers offer three stage air flow control, this purifier is one of the very few that offers five stage air flow control. That means if the air in the room is dirtier than usual, this will be able to get it under control quicker, before switching back to lower speed. During our testing in a 600 sq. ft. room size, it brought down the PM 2.5 level from 89% to 49% in 10 minutes, and depending on how often outside air is allowed in through constantly opening doors, maintains that at around 40% on the lowest fan speed with some outdoor air still streaming in.

There is a 9-stage air purification process. The active filter removes particulate matter such as dust and pet dander, the Anti-microbial nano silver formula traps bacteria, fungal spores and pollen that can trigger allergies and the Cold Catalyst filter eliminates volatile compounds such as methyl aldehyde and ethane thiol. The SCPR 700 also has the vita-ion feature which disperses a mixture of silver ions and nutrient diatoms in the air. Then there is the Therapeutic filter feature, which fills the air with vitamin C, which is known to reduce stress and also helps in deodorization.

This extremely powerful indoor air purifier is an excellent option if you are looking for something that can clean the air of a fairly large room. The rather elegant design is definitely a bonus.