Grow your own food

In late 2014, Mani H.K. from Coimbatore and Mayukhini Pande from Bhopal moved to Bengaluru on work. Within a few months, they started feeling homesick. The duo, now co-founders and business partners at Greenopia, a crowd-funded brand that makes and sells smart gardening kits online, felt there was something missing in the food, the vegetables, they ate in the city. Sure, the produce looked picture perfect in the supermarket crates, almost as if freshly plucked—but it was just not as flavourful as the vegetables back home. Separately, both tried growing mint and tulsi (holy basil) for their tea and, later, cherry tomatoes, but couldn’t sustain this. By May 2015, the two graduates from the National Institute of Design, Ahmedabad, put together their learnings and skills as professional designers to come up with a Self-Watering Mini Herb Garden kit (www.greenopia.co). Urban farmers can buy this kit for ₹ 1,600 and get a self-watering pot connected to a small reservoir, a soil mix and seeds of herbs like methi (fenugreek) and tulsi.

“We started off as failed urban gardeners. With Greenopia, we wanted to make the process easier for gardening newbies," says Pande. Her advice is simple: stay local, and in tune with the season.

Hari Ram P.S., a Bengaluru-based urban gardener who conducts workshops on kitchen gardening, agrees. “It is easiest to stick with the season. And it is also best to source seeds from local farmers, as these varieties are better suited to survive the local climatic conditions," he says.

In 2010, Hari Ram, who works at an information technology firm, started growing his own produce. His motivation was the realization that for his son, “vegetables and fruits came from either the refrigerator or the supermarket". Hari Ram started a kitchen garden on his building’s terrace with simple greens like coriander and spinach. “Because these greens have the quickest cycles—about 20-25 days—and it gives you immense satisfaction as a beginner to see these coming to life," he says.

“As urban consumers, we have grown up with the illusion that growing food is someone else’s responsibility," says farming consultant Kapil Mandawewala. A former Deloitte employee who returned to India from the US in 2010, Mandawewala runs Edible Routes, a Delhi-based farming consultancy that plans, designs and manages organic farms for both private and public projects.

He asks three questions: Who is growing your food? Where is the food being grown? And how is it being grown? In Mandawewala’s experience, not even a handful of people can answer these questions. “If you try to grow at least one vegetable or fruit, you can answer these three questions," he says. A hands-on experience of growing one’s own food is not just satisfying, it also makes one aware of how much effort really goes into growing something we take for granted.

Hari Ram knew it would be tough to start out as an urban farmer, and while setting up his garden, did not fight too hard against pests and bugs. He took it all as a learning experience, letting his son observe the bug life on the plants. “Other than that, the ‘failures’ typically have been about how I sowed the seeds, or questions about seed quality itself. A lot of times, you also have problems because the soil you are using can have inadequate nutrition," he says.

Pande faced similar problems. “When we started, we didn’t realize that things like how deep we sowed the seed, or the quality of the soil mix, could affect our plants."

Initially, even growing a plant as common as the tulsi was tough for Pande. “I knew it needed a lot of light, so I kept the tulsi in my balcony. The Internet told me my plant needed 8 hours of direct sunlight. But I had no way of measuring this. My tulsi ended up getting dry and, finally, it died." 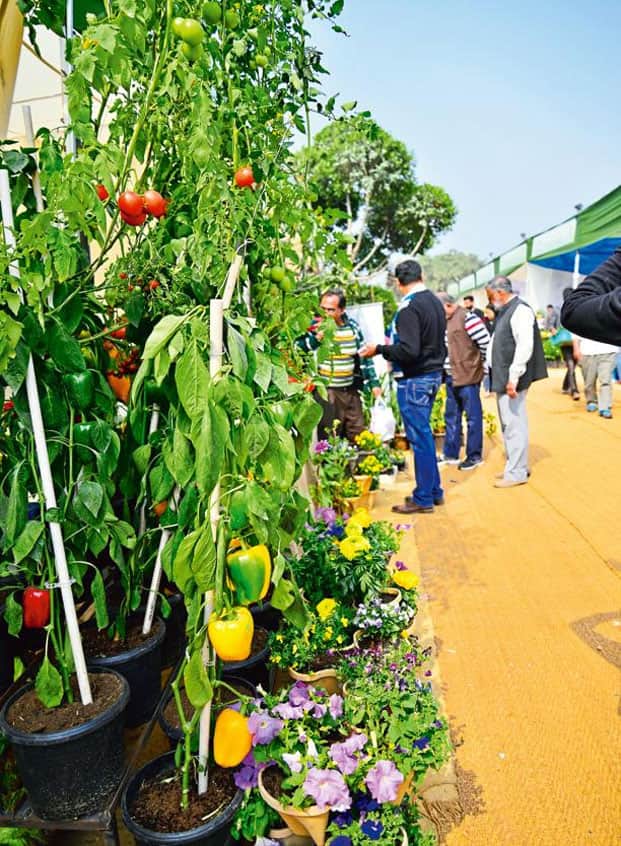 Online forums can be confusing. Sometimes, people had two different responses to the problem of a yellowing leaf: over-watering, said some; under-watering, said others. In reality, it can be both.

Mani and Pande are now developing their basic kit into a more “smart" one. These improved versions will come with a sensor stick and a mobile app that will guide a first-time gardener on caring for his/her garden better.

Sometimes, of course, there is little you can do—some plants, for instance, are born with diseases. “These are things you can do nothing about," says Hari Ram. There were days when he would sit in front of a plant and manually pick out insects one by one. “There are good pests and there are bad pests and sometimes, they come together," he says. “You will only gradually understand how to deal with them organically." He recommends using even organic treatments like neem oil rarely, or in extreme situations.

According to Mandawewala, there is another magical thing that happens: You become more in tune with nature. Without consciously realizing it, you start noticing temperature differences more acutely—the force of the breeze and the might of the sun.

You begin to savour the calming, therapeutic effects of gardening. In a study, Healthy Nature, Healthy People, published by the Oxford University Press in 2005, the authors refer to an early 1990s study which found that an annual gardening competition at a public housing area in New York led to “an increase in community cohesion...a reduction in violence, and an increase in positive attitudes about themselves and their neighbourhood...resulting in personal and neighbourhood transformation".

“Also, when you grow your own produce, you can distinctly start telling the difference between your produce and the produce you get from the market," says Mandawewala.

So far, about 200 households in Delhi have benefited from his consulting service. They now grow vegetables like cabbage, carrot, radish, tomato and okra on terraces and balconies. 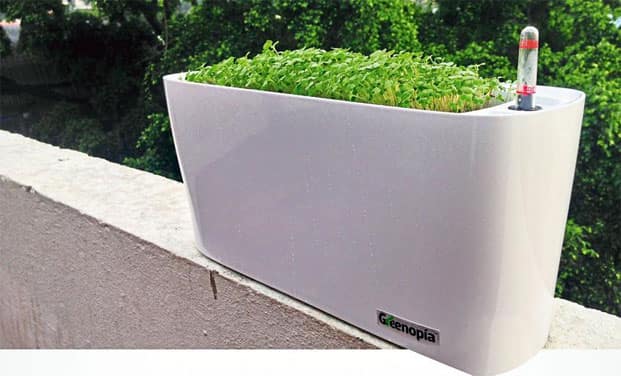 But it isn’t always smooth sailing. For instance, while the interest in going organic and becoming a home-grown farmer is high, the drop-out rate is even higher. Pande says the most common excuse people give when plants die under their care is, “I don’t have a green thumb."

Take the example of Bengaluru-based Anant Agnihotri, who works at the Indian office of a US-based discount-retailer corporation. He moved nine cities as a child because his father had a transferable job. “No matter where we went, we always had a garden at home," he says. “So, having a garden for me is special, but it is difficult to maintain." In late 2015, a relative introduced him to a Greenopia pot after seeing his efforts at growing a tulsi plant fail.

“I just couldn’t sustain the tulsi because it needed everyday looking after," says Agnihotri. His Greenopia pot’s self-watering system took care of the plant through the week, while the mobile app, which he is beta-testing, alerted him every four-five days to refill the water tank. Now, he also grows a tomato plant, a hibiscus plant that would never have survived earlier, and a money plant. “I’m trying to grow methi too," he says.

Urban gardening is not just about sowing a seed, says Pande—it’s about creating an entire ecosystem.

If you want to take the plunge with vegetables, here are a few pointers by Hari Ram, an urban gardener based in Bengaluru:

Sow two-three seeds per slot in seedling trays. Once they germinate, thin them to a single plant per slot and allow them to grow for three-four weeks. Then transplant an established sapling into a larger pot (12-14 inches). The plant will begin growing rapidly, and will flower in less than 60 days. Chillies like a lot of sunlight, so put them in a bright area. They don’t like too much water though, so water them on alternate days.

For a family of four: Two-three plants 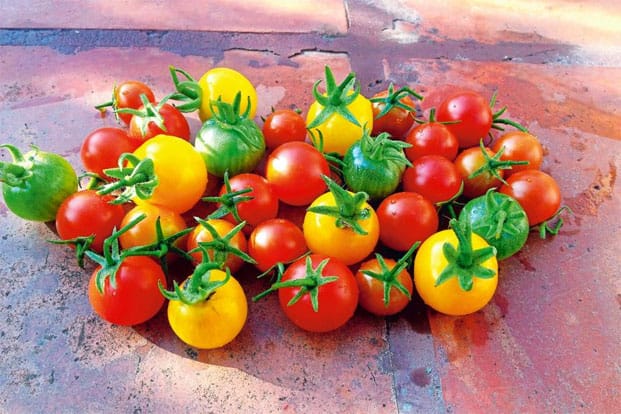 From spaghetti sauces to a quick ‘aloo-tamatar subzi’, this fruit is used in almost everything, and is easy to care for. Sow seeds in seedling trays. Once the plants reach 5-6 inches in height in about three-four weeks, transplant them.

Provide support with long sticks and allow the plants to grow as tall as they can and ripen. Tomatoes love the sun too, so remember to keep them in a sun-lit area.

For a family of four: 10-15 plants. These are short-lived, and best harvested in spring-summer.

There is no need to use seedling trays here, as you can sow okra seeds directly in the soil in a pot. An 8- to 12-inch plant per pot is ideal for good yield. Regularly check on it in the initial 20-30 days. Okra plants love sunshine.

For a family of four: A single harvest from Five-six plants will yield enough okra for a meal. These grow much more quickly than onions—in 20-25 days. Sow small bulbs in the soil and water moderately for the first four-five days until you see the springs pop up. You can witness their rapid growth almost on a daily basis. Pick the yield after a fortnight.

For a family of four: Sowing four-five bulbs regularly will ensure a continuous supply, for they germinate quickly.

Note: All these are summer plants. You can always use them in any other season, but to farm organically, it’s best to stay true to the weather. If you still want to go against the grain, so to speak, you will have to be prepared for less yield and/or more maintenance.