While the “UNAIDS 2011 World Aids Day" report shows that the rate of HIV infection has fallen by 56% in India, the country still has the third largest number of people with HIV/AIDS in the world.

The National AIDS Control Organization (Naco)’s 2011 annual report shows that young people in the age group of 15-24 account for 31% of the HIV/AIDS burden. An older study, Unicef‘s 2003-08 analysis, found that only 20% of adolescent girls and 36% of adolescent boys in India had any knowledge of the disease. This is unfortunate for two reasons—first, because a large percentage of those infected with HIV in India are between the ages of 15 and 24 and second, 80% of HIV infection among Indians is transmitted through heterosexual contact, not through men having sex with men or through the use of contaminated needles, as is often popularly assumed. 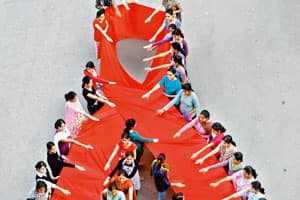 Fight it: Children should be educated about HIV/AIDS early in life. Photo: Ajay Verma/Reuters

So the question remains, how can you provide information to children on HIV/AIDS that’s accurate, sticks in their minds and will benefit their sexual health in the long term?

New York-based Amy Levine, a certified sexuality educator at the American Association of Sexuality Educators, Counselors and Therapists (Aasect), says teenage children can sometimes be under social pressure to have sex and use drugs. This is also an age when they might feel invincible and need to be told in a supportive way that they are not. Accurate current information needs to be shared with them in a positive and sensitive manner. One way to do this could be through paediatricians, as the American Academy of Pediatrics suggested last month in a policy statement on paediatrics, “Adolescents and HIV infection: The Pediatrician’s Role in Promoting Routine Testing". The paper recommends that paediatricians be involved in counselling and screening children between the ages of 16-18 for HIV/AIDS.

But this can be challenging in the Indian atmosphere.

Anita Shet, associate professor of paediatrics at St John’s Hospital, Bangalore, directs the HIV clinic at St John’s and sees both adults and adolescents with HIV. According to her, paediatricians are well-equipped to counsel young adults about HIV but conservatism among parents leaves them hesitant to discuss such topics. She herself takes a careful approach with adolescents, and starts by discussing good touch and bad touch. When talking about how sexual diseases can spread, Dr Shet says she first discusses issues of hygiene in general, talking about the basics like brushing teeth and taking regular baths, before moving on to sexual health.

Meena Malkani, consultant paediatrician, Jaslok Hospital and Research Centre in Mumbai, says she hasn’t counselled children so far but will now think of ways of bringing sexual health and HIV prevention into conversations with her adolescent patients. She believes, however, that counselling on HIV/AIDS would be far more effective in a school environment, where a large group of children can be addressed by a public health communications expert or a doctor.

Bangalore-based Shailaja Jairaman is a mother of two girls, aged 13 and 15. An active parent at the National Academy for Learning (Nafl), the school that her daughters attend, she says that though there is a class which broaches the subject of sexual health, the discussion on staying safe and protecting oneself against HIV/AIDS and other sexually transmitted diseases (STDs) is kept to a minimal. She attributes this to conservative thinking on the part of parents and feels that seven out of 10 parents would be offended if a paediatrician or the school brought up the subject of sexual health and HIV prevention with their child.

Marie-Noëlle Belot Khindaria, a health educator based in Geneva, Switzerland, says parents need to understand that sex education is not about teaching children to have sex, it is about teaching them to become responsible and healthy people. Belot Khindaria has more than 20 years’ experience in health promotion and education on World Health Organization (WHO) projects, including one in New Delhi. Jairaman feels the impact would be greater if teachers or doctors were to speak about this subject to children.

Nivedita Mukerjee, director, projects, Neev Schools Pvt. Ltd, a pre-school chain in Bangalore, has 20 years’ experience in communication and education, sexual health and HIV prevention. She believes this issue can be addressed in schools, but it should not be just a lecture every once in a while. She believes HIV/AIDS prevention should be integrated into the school curriculum, and the disease should be discussed when other diseases are taught in biology.

This approach, however, can pose a bit of a problem since several states are ambiguous in their attitude to sex education. Teachers and school authorities need to constantly determine what can be taught and what cannot, and this is what hampers the spread of awareness about HIV/AIDS.

M.K.C. Nair and colleagues from the Child Development Centre, Medical College, Thiruvananthapuram, conducted a sex education study—published in May in the Indian Journal of Pediatrics—on 996 teenage boys and 560 girls from three urban schools in Kerala. They found that teenage boys and girls had limited information on sexual health and HIV/AIDS, but their awareness levels improved dramatically after a class on the subject. The children were taught from what the research group called the “Adolescent Reproductive Sexual Health Education (Arshe) package" and their knowledge was assessed before and after the package was taught. The Arshe package has been examined by the Indian Council of Medical Research. Before the class, 64.1% of the girls and 37.7% of the boys had limited knowledge on sexual health and HIV; after the class, only 8.3% of the girls and 3.5% of the boys remained in that category.

Dr Shet says she can understand why some parents would feel uncomfortable about addressing these issues and has some advice for them. Parents need to affirm the idea of communication. Make sure that your child has a “go to" adult in their lives, not necessarily their parent, but an aunt or a teacher whom they can trust and know that they can confide in and talk with sensibly. Make your children understand that their actions have consequences. They need to know that if they have unprotected sex, they can get infected with diseases, and while some are curable others, like HIV/AIDS, are not.

• Not having sexual intercourse (abstinence) until you are an adult is the best method of preventing HIV. It will also help prevent other sexually transmitted diseasesand pregnancy

• Sharing needles of any kind puts people at risk of HIV and other infections. This includes needles for injecting drugs, steroids, piercing ears and tattooing.