On this TV show, designer-turned-wardrobe spy Aki Narula tells women what not to wear

After Oh My Gold with Lisa Ray and B:blunt with Adhuna Akhtar, TLC’s next show, What Not to Wear India, with actor Soha Ali Khan and designer Aki Narula, is designed to make the average Indian woman look and feel better.

Based on the UK series What Not to Wear, the fashion police squad of two gleefully trashes wardrobes full of ugly, ill-fitting clothes and gives their subjects a makeover. While Narula epitomizes tough love, Khan empathizes with participants. “I am not a style expert, but I could relate to people who came on the show. I do believe that you should be who you are and if you don’t feel like dressing up, you shouldn’t be judged for it. But that’s the distinction we’re trying to make on the show, between fashion and style. Fashion may not be for everyone, but style is," says Khan.

The 13-episode series also aims to educate viewers about body types, the right fabrics and prints to wear and techniques such as colour blocking. Here, Narula gives us some style tips. Edited excerpts:

Tell us about the experience of doing a makeover show.

I could not have had a better TV debut. For me, the high point was talking to real people and getting some real insights. I could share what I’ve learnt in the past 10 years with real people and dealt with personal and emotional issues.

Our sense of style has a lot to do with self-esteem. Was there a lot of behind-the-scenes coaching? 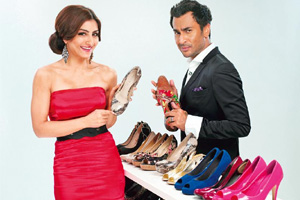 Yes, lots of it. Our hits, or targets as we called them, were nominated by their friends or family. There was a range of people—an 18-year-old tomboy to a 50-plus woman whose daughters nominated her. A lot of people tend to be in their comfort zone, or don’t prioritize dressing well. We did get some inhibition, some conflict from the participants.

It was about making them realize that 5 minutes of me-time in 24 hours won’t harm, it will only help. Sometimes it’s just about wearing kajal before heading out. When you love and respect yourself, you automatically command it from those around you.

Give us the three major problem areas of the average Indian woman and the fashion ‘rules’ to fix them.

For a heavy hip area, there is a tendency to mask it, so you go with A-line kurtas. But instead of taking away, they bring attention to the region. Wear something straight. And go for lighter fabrics like georgettes or chiffons, because they drape well without being clingy. In the case of trousers also, wear straight-legged, as opposed to skinny or bootleg, which almost gives you a dumb-bell shape.

Women with a bigger bust area tend to wear tighter round necks, collared shirts and high necks in an attempt to hide. That’s completely incorrect. Instead, show your neck, show your collarbone; I’m not saying cleavage, but things like boat neck are great for them. Wear longer earrings and statement necklace pieces, it’ll take the attention away from the bust to the little hint of skin, or the accessories.

The belly is everybody’s problem. I’ve always said that all of us have a bit of a paunch, nobody’s perfect. The thing to do is to use belts. Also, if you’re wearing a top or kurti, wear higher waist pants with them so the lower abs get tucked in. The fabric should not be too clingy.

How was it working with Khan?

I was happy to know she’s my co-host because we have a similar sense of humour. From Day 1, we were giggling away. And we balance things well. When I was too caustic on the show, she’d take over. We played the good cop/bad cop pretty well.

Kareena Kapoor, hands down. Whether it was Tashan, Kambakkht Ishq or Kurbaan, I think she’s the most professional and polite actor. For Kambakkht Ishq, she tried 63 dresses and some 49 pairs of shoes in 2 hours. She flew down from London just to do fittings with me and flew back the same night. Her attitude is that “I’ve brought you on to this project because I trust you, if you feel this will work on me, I’ll take it".

What Not to Wear India will air at 10pm daily on TLC starting
3 September.