A year ago, on 2 July, a 21-year-old from the Czech Republic giggled her way into the press room—she had just won the women’s singles title at Wimbledon, brushing past the 2004 champion and former top-ranked player Maria Sharapova. Used to giving short answers and just learning to speak English, Petra Kvitova managed to field most of the questions from reporters with as much tact as she had fielded Sharapova’s serves earlier.

But more importantly, Kvitova’s surprising win came as a breath of fresh air at a time when women’s tennis seemed to be getting older.

A year down the line, things have changed. As the 2012 Championships begin at Wimbledon on Monday, Kvitova will aim to defend her title. But this event comes at a time when Kvitova has not won a single title this year.

Ranked No. 4 in the world, Kvitova’s clay court season earlier this summer was unimpressive. Of the four events she entered, she couldn’t get past the semi-finals even once, losing both her semi-finals, including the French Open, to Sharapova. 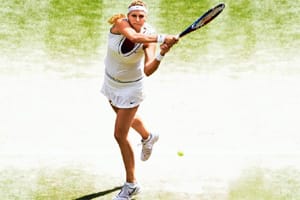 But surely, the onset of the grass court season would bode well for her psyche, especially since the Olympics will also be played at Wimbledon? “Yes, it is a special year for me because I love playing on grass. I am excited to have the opportunity to play twice at Wimbledon in one year," she says, adding that she is looking forward to playing in her “country’s colours at Wimbledon" this year.

Women’s tennis is also fragmented these days. Since the beginning of 2009, only twice has the top-seeded player won a Grand Slam; Serena Williams on both occasions. The last time a player successfully defended a Grand Slam title was in 2010 when Belgium’s Kim Clijsters won the US Open; she had won in 2009 as well.

Four of the past five Grand Slam winners have also been first-time winners. But that doesn’t bother Kvitova.

“For sure, there are many different players who can win tournaments. Maria has had a great year so far and played well at Roland Garros; she deserves to be No. 1. But there are so many young players coming up like (Victoria) Azarenka. There is tough competition. It makes a tournament exciting when you don’t know who is going to win it," says Kvitova.

Kvitova says she lost her privacy but she isn’t complaining. “In the Czech Republic, it was a big change for me compared to the time before I won Wimbledon. People recognized me everywhere, they wanted signatures and photos. I lost my privacy. But I am glad that happened! Around the world it is quieter but some people on the street or in the airport recognize me too," she says, adding that she tries to live “a normal life".

Kvitova won two titles in the rest of 2011 and six overall (the highest number of titles in the year, tied with Caroline Wozniacki) and topped the charts in prize money, taking home more than $5 million (around ₹ 27.9 crore now). She finished the year ranked No. 2 and had the best win-loss percentage (she won 83.6% of all matches she played) after Williams, who played just 25 matches in 2011 because of injury.

The top-ranked Czech player also helped her country lift the Federation Cup team event title in 2011, beating Russia. With her male counterpart and club partner Tomas Berdych (ranked seventh in the world), Kvitova—who has a 10-match winning streak in the Fed Cup—believes Czech tennis is in good hands. This year, the Czech Republic is already in the Davis Cup semi-finals, to be played in September, and in the Fed Cup final, to be played in November.

“Both the Davis Cup and the Fed Cup teams have had a great year and this helps raise the profile of tennis—lots of people come to see our matches and also watch on television. It’s a good time for tennis in the Czech Republic," says Kvitova.

As the defending champion, her greatest challenge this year in Wimbledon will come from Sharapova, a former champion and winner of the French Open. The Russian has won all three of their matches this year and is in resurgent form, unlike Kvitova, who has not reached a single tournament final this year.

But just like last year, Kvitova may yet spring a surprise.