‘I feel I belong to six worlds’

In his books about his family, his own life, India and a variety of other subjects, Ved Mehta has created a mini-universe that in its richness of fact and detail, and in its easy readability, at once educates, elevates and entertains, but most of all transports the reader to Mehta’s own universe. Mehta—who became blind at the age of four—has lived in the US since 1949, when he was 14. In town to promote the republication of Daddyji and Mamaji, biographies of his father and mother respectively, a jovial Mehta was clearly enjoying his wife Lynn’s discomfiture as he wondered how her new set of undergarments went missing from her suitcase on their plane journey from New York to New Delhi. Edited excerpts from an interview: 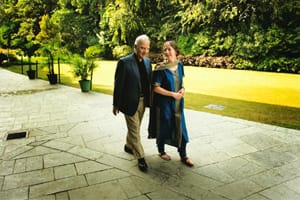 Keep walking: Ved and Lynn Mehta at the India International Centre in New Delhi. They have been married 26 years and have two children. Harikrishna Katragadda / Mint

How was India seen in America in the years following independence?

What did the Americans make of Nehru?

There were at least two things about him that went against the grain for the US: One, he was constantly preaching against seeing the world as two monolithic halves, divided between capitalism and communism. Nehru wanted India to be neutral and the Americans didn’t like to hear that. Two, he had this moral stature and he would be preaching to the US, telling them what they should do, and they didn’t like that. The intelligentsia loved his aristocratic background. They used to write in the American papers that he had a perfect Oxford accent, but he in fact went to Cambridge. Any personal impressions of Jawaharlal Nehru?

As a person Nehru was irresistible. He had me over for lunch by myself in 1959—there was Nehru, Indira, Sanjay and Rajiv. My first impression was that Sanjay and Rajiv were very nervous. It turned out that after lunch they had to go to the doctor to get their warts removed.

Why has the forthcoming series of your republished books been titled ‘Continents in Exile’?

There are 12 books in the series (of which) four are set in India, two in America and one in England. I feel I belong to six worlds at the same time—the world of blindness, India, America, England, the old New Yorker (magazine) where I worked for 33 years, and the world of psychoanalysis as I underwent therapy.

How has ‘The New Yorker’ changed over time?

When I was there, everything was totally non-commercial. It was like the 19th century magazines, which would serially publish novels, great ones by writers such as Dickens and Tolstoy. I wrote 100,000 words on Mahatma Gandhi and 250,000 words on India over a three-year period for The New Yorker. That would be inconceivable today.

You left India for the US at the age of 14. Do you still speak Punjabi?

My cousin came to America at age 16, a year after I did. After a year or two, if anyone spoke to him in Punjabi, he replied in English. There are many Sikh taxi drivers in New York now. I speak with them in Punjabi and then they won’t accept any money. They say they like America but find it difficult when they bring the girls (from back home) to America. They complain that the girls want to apply powder on their faces; they want to cut their hair and want to shave at different places. I say to them, “Sardarji, in Rome do as the Romans do." They agree, then add, “But not for girls."

How did you research for ‘Daddyji’ and ‘Mamaji’?

Writing is about talent, not researching. In my case, lot of it is memory—people, describing colour, the change of seasons. For Mamaji, I interviewed my parents, dug up wills, land deeds and the diary my grandfather kept. But that is preliminary work. You have to create a story that is factually accurate and then make it interesting.

These books were written 35 years ago. Have you read them again?

Never. I have great horror of repetition. Though that doesn’t apply to sex.

Any observations on the differences between your parents’, yours and your children’s generations?

My grandfather, Lalaji, only travelled once—in a bullock cart to Haridwar. My father went once to England and once to America. Father had seven children and 18 grandchildren, who are now settled in Australia, America and England. As Gandhiji said, we are industrializing so rapidly we’ll soon go back to oil lamps. We are consuming the world’s resources so rapidly. My coming to India for 13 days would have been inconceivable (a) hundred years ago. In my first 10 years in the US, I called India six times. For a 3-minute call, I would have to book two-three days in advance.

Are you pessimistic about the future?

Freud said that if you have been breastfed then you have to be optimistic.