Chandralekha Mehta (Pandit) is perhaps the best person to write a book that tells the story of a turbulent, pre-independence India. After all she is Jawaharlal Nehru’s niece and Vijaya Lakshmi Pandit’s daughter; growing up she had a ringside view of the freedom struggle. 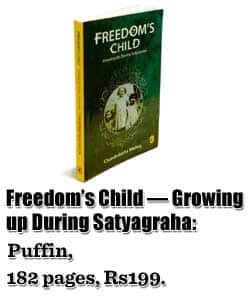 Says the author at the outset: “We now take our freedom for granted, but it would be interesting to look back on the struggles that led to it and what it meant to those who played a part in it." Mehta’s account is absorbing and illuminating, without being preachy.

Freedom’s Child starts at Anand Bhawan, the Nehrus’ mansion in Allahabad. Life in the city was a mix of childhood activity and political activism. The house of the Nehrus played host to a galaxy of legendary names. Playtime was interspersed with arrests of “Papu" (Mehta’s father, Ranjit Pandit), “Mamu" (Nehru) or “Mummie" (Vijaya Lakshmi Pandit).

Gandhian philosophy ruled. The dress code at marriages — and other functions — was khadi. Life at Anand Bhawan was anything but ordinary. But Mehta’s descriptions are tinged with humour and a carefree attitude that fails to hide the nostalgia and the concern that a child displays — whether it is the holidays they spent in Khali (near Binsar), her visits to jail to meet Mamu, Papu or Mummie or imminent threats of a police raid.

Here’s one. She recounts a tale about how, one night, Lal Bahadur Shastri (who was the only big Congressman to escape arrest in 1942) was at Anand Bhawan cyclostyling pamphlets that were to be distributed in the countryside. Suddenly they got the news that the police might arrive. Shastri, in panic, flushed the fliers down the toilet. “Along with all other anxieties Mummie was going through at that time was now the possibility of a malfunctioning toilet system in a house full of people!" says Mehta.

The author offers interesting insights on the big names of the time. She paints a realistic picture without letting awe overshadow everything else, touching upon little-highlighted things about the luminaries she grew up around. Sample this one on Gandhi: “Bapu’s journeys were as full of drama as other things he did… When the train stopped at a station, a multitude of people would be on the platform, jostling around for a glimpse of Bapu through the window or for darshan if he came to the door. Among them were those who begged for an autograph, and Bapu, with his business acumen, would come to the door of the compartment and mischievously ask for money for the party fund in exchange for his signature. This was gladly given."

The spartan Gandhian life, travelling third class and wearing coarse khadi — aren’t these sacrifices that made the Nehru family the shining examples of the freedom struggle? Mehta scoffs at the word ‘sacrifice’. As, she says, did the rest of the Nehru-Pandit clan. “Mummie," she writes, “used to be quite sharp with those who commented on the sacrifices made by the Nehru family, in the hope of pleasing her. She would say to them, ‘When you do what you want to do there is no question of sacrifice’."

Mehta says no one in the family other than Nanima (Motilal Nehru’s wife) took the “sacrifice" thing seriously. Vijaya Lakshmi Pandit’s conversation-stopper on sacrifice was this: There were hundreds of families who gave up all for Bapu — at least our family was well-rewarded after independence.

The writer is the editor of Heek, a children’s magazine.