Divestment: A gift from the government?

Beware of governments bearing gifts is accepted wisdom. After all, being responsible for one of the two unpleasant certainties of life does dent people’s enthusiasm. However, there is one area where governments do bestow gifts, and no we’re not talking about boring topics of welfare and subsidies. Investors are unlikely recipients of government largesse through privatization programmes. The world over, sale of public sector enterprises (PSEs) usually increase the wealth of private investors. This is primarily through two means. The first is because the government’s lack of financial acumen usually leads to sales at a discount to what the market is prepared to pay. Second, after privatization, there is usually a greater management focus on shareholder value enhancement that benefits investors (or so the theory goes).

Therefore, the Indian government’s announcement earlier in September to sell stakes in Coal India, NHPC and ONGC is to be welcomed. However, should investors look at it as the new government’s early Diwali gift or is it merely an attempt to plug the fiscal deficit? Before you get excited, you should remember that this strategy is unlikely to make you rich enough to retire and play golf. Since share allotment is usually a fraction of the order amount, you can’t put large amounts of money to work (at least not legally). Therefore, to really know if divestment is a gift, you need to assess whether the second reason for wealth generation holds for partial divestments where the government still retains control. Does dilution of the government’s stake lead to long-term stock performance?

Surprisingly, and contrary to perceived wisdom, the performance of divested CPSE stocks is truly appalling. As table 2 shows, almost half the set had negative returns since their offering. Even worse, only two stocks outperformed the Nifty (Oil India and NBCC) with the rest trailing substantially. Moreover, this relative underperformance is understated when you consider the fact that the index return is brought down as some of the PSEs are also part of the Nifty. 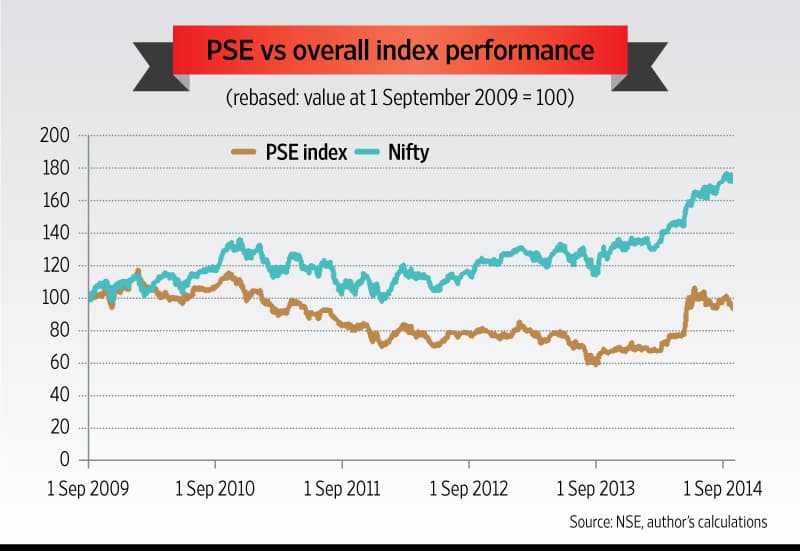 While one data point is insufficient to categorically prove the hypothesis, Maruti offers the cleanest measure of the public vs private impact on returns since other privatizations have been merged into existing companies (e.g. Balco and Hindustan Zinc which have become part of Vedanta) thus muddying the returns distinction across time). The three-year total returns prior to the government’s exit in May 2007 were 57% compared with the Nifty’s total returns of 143%. After exit, Maruti’s total returns have been more than double that of the Nifty (300% vs 113%. Comparison period 10 May 2007 to 30 September 2014; based on NSE data and buyupside.com calculations).

Whether the government should seek to maximize profits at PSEs (or whether it should even be in business) is best left to economists and political philosophers to debate. Practical men accept that PSEs will continue to be operated with a much broader set of goals than pure profit maximization (in the government’s defence, this is consistent with the founding principles of the public sector). Hence, the market’s heavy discounting of PSE shares. Investors’ distinct indifference to activist hedge fund The Children’s Investment Fund Management’s (TCI’s) attempts to shake-up Coal India management underscores this point. The share price hardly budged during the two-and-a-half year confrontation between TCI and the government. Now TCI has surrendered after failing in its vociferous attack to reform Coal India. It has sold its stake and quietly slunk away.

The moral of the story for investors is that unless the government radically changes the way in which PSEs operate (highly unlikely) a buy-and-hold strategy is likely to be a money loser. Buy as much as possible of a PSE equity offering and flip it on the first day. If you make the mistake of bringing it inside your portfolio, your returns are likely to go up in flames.

Shashank Khare is an investment professional and writer. After studying engineering at IIT-D and business administration at IIM-A, he entered the world of credit derivatives before CDS became a four letter word. Having successfully batted through the crises, he now indulges his passion for economics, finance and policy through writing and trading.