Diving adventures, by definition, involved heading out to the sea. Once in, experienced divers looked for wrecked ships, underwater formations, coral reefs and marine creatures, and came back with stories of groupers the size of the living room couch and World War II battleships packed with jeeps and tanks. Greenhorns wet their feet in lagoon dives and introduced themselves to their first sand beds. 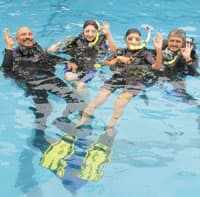 “India has a 7,600km mainland coastline and only a few hundred divers, largely because training has been destination-, time- and money-dependent," says Madhava Reddy, director of Planet Scuba India. “An inland diving facility, such as is already popular in the US, Europe and South-East Asia, looks to prep the city-bound adventure seeker for the real thing, so you don’t spend your holiday learning the ropes."

After 9 hours of theory and 6 hours in the pool, the student may choose to complete his Professional Association of Diving Instructors certification at an on-site diving school anywhere in the world.

The first programme in Bangalore began on 1 September and the next is scheduled to start on 16 September. Planet Scuba India plans to launch operations in Mumbai by the year-end and in New Delhi after the winter.

Air travel doesn’t generate the maximum carbon emissions, electricity generation does. However, since cracking down on power usage isn’t a feasible exercise, the conscientious now look to keep track of their carbon footprint. Galileo, a leading Global Distribution System (www.galileo.co.in) which has 11,500 agency terminals in India with links to 450 airlines, has just launched the Travelport Carbon Tracker. This calculates carbon emissions impact for every travel booking—air, rail and road—and stores the results for future reference and comparison, thereby allowing companies and individuals to make better informed travel decisions. Bruce Hanna, president and chief financial officer of Galileo, India, believes the tool sets the stage for the day when Indian companies will be trading their carbon footprints while negotiating alliances.